Posted on June 4, 2012 by climatechangefork

Whitwell, Tennessee is a small town (approx. 1600) in the Sequatchie Valley, a short drive from Chattanooga.  The Principal of the local middle school, Linda Hopper and David Smith, the Vice Principal at the time (now principal of the elementary school), realized that, when their students graduated, many would go on to universities and/or jobs in different places with a more heterogeneous population.  The vast majority of the school’s students and the teachers were white, Anglo-Saxon and Protestant.  There were almost no people of color, no foreign or immigrant students, and no Catholics, Muslims or Jews.

David Smith went to a conference in Chattanooga (1998) and on his return suggested a way to try to give students a lesson in diversity by teaching the 8th graders about the Holocaust.  The idea was accepted.  They decided that the class would be voluntary and the students’ parents were informed and gave their consent.  Sandra Roberts, the local language arts teacher was chosen to teach the subject.   (Interestingly, she had to learn the subject from the Internet.)

In one of the first classes, Ms. Roberts mentioned that 6 million European Jews, two thirds of European Jews at the time, were slaughtered just because they were Jews.  The expectation was that the children would be shocked – they were not.  A few of them simply asked, “Ms. Roberts, how much is six million?”

Most of them could write the number but none of them realized what it meant to translate the number to individual people (too big to comprehend – see Wagner’s Op-Ed in the previous post).

Almost immediately, the school realized that the challenge was to try to convert an abstract, collective, concept – such as this very big number – into something that the students would grasp.  They decided to collect six-million paper clips to see how big that collection would be.  The process of gathering the paper clips is one of the most fascinating aspects of the whole story  (“Six Million Paper Clips – The Making of a Children Holocaust memorial” by Peter W. Schroeder and Dagmar Schroeder-Hildebrand, Kar-Ben Publishing, 2004) and (“Paper Clips” a movie written and directed by Joe Fab).

They quickly realized that they didn’t have enough paper-clips locally and that they needed some influx from the outside.  They started to publicize (no blogs at that time) the project and the need for paper clips locally, then nationally and eventually globally.  They got paper clips with names and stories of Holocaust victims attached and the students were able to associate individual paper clips with individual people that had stories to tell.  They counted all the clips. It took some time – but they did pass the six million mark.  A German couple, the Schroeder’s, the same couple who  eventually wrote the book about the effort, heard the story and decided to try to do something to help.  They started to search for an old railcar – just like the railcars that were used to transport the victims to the death camps and concentration camps.  They finally were able to locate one and transported it to Withwell, where the full community collaborated to create a small museum that is centered on the railcar that now houses the paper clips. 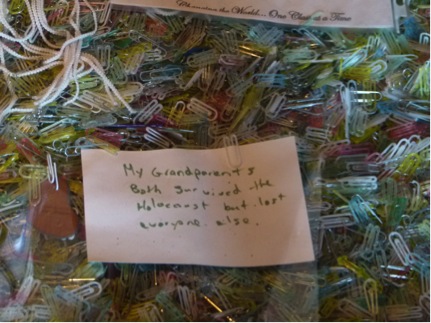 The clips keep coming to this day.

By the time that we visited the place, a few months ago, the number approached 20 million and the students still count them and get an opportunity to explore the full horrors of the Nazi terror.

When I saw the movie about the project for the first time, it was in a liberators-survivals reunion in Hudson Falls NY at one of the conferences that Matt Rozell (see my first blog) organized.  Joe Fab was there to show the movie – and my first thought was, “How can I learn from this experience to be able to individualize the climate change story and refute Wagner’s thesis that individual efforts don’t count?”

Micha Tomkiewicz, Ph.D., is a professor of physics in the Department of Physics, Brooklyn College, the City University of New York. He is also a professor of physics and chemistry in the School for Graduate Studies of the City University of New York. In addition, he is the founding-director of the Environmental Studies Program at Brooklyn College as well as director of the Electrochemistry Institute at that same institution.
View all posts by climatechangefork →
This entry was posted in Climate Change and tagged Clean Energy, Climate Change, Climate Change Deniers, Climate Skeptics, Democratization, Global Warming, Holocaust, Science. Bookmark the permalink.

6 Responses to Holocaust “Paper Clips”- A Possible Guide for Democratization of Climate Change?