Posted on September 2, 2014 by climatechangefork

Science Magazine is addressing inequality; on May 23rd, they came out with a special issue dedicated to the science of the topic (not exclusively – there is other stuff in the issue as well). Other special issues of Science this year have included Exploring Martian Habitability, Visualization Challenge, Crystallography, Breast Cancer, the Gas Surge, Strategies Against HIV/Aids, Slicing the Wheat Genome, Vanishing Fauna, and Parenting, so we are in good company! I am including a table of relevant articles below:

Table of the relevant articles in the issue:

The list reflects a mixture of short introductory pieces, and various other segments on the topic followed by with short review articles. Piketty (together with Emanuel Saez) makes a contribution on the same topic as his book, but this time it is a much shorter piece and considerably more quantitative. There is no way for me to try to cover all the topics addressed – both the volume of information and the prerequisites required for comprehension make that impossible in this setting. Science Magazine readers are not required to be experts in the fields but the material does require some background in science and math. I chose instead to make some comments on three pieces:

I will not try to summarize the articles here but will instead take key sentences and/or paragraphs that demonstrate the points. I strongly encourage everybody to go to the original Science articles and try to read them as they were intended to be read.

Adrian Cho is a physicist that turned to economics. He starts with a sentence that is classic for this kind of article: “If the poor will always be with us, an analogy to the second law of thermodynamics may explain why,” and follows it up with a short explanation:

The argument builds on the century-old kinetic theory of gases, in which physicists asked: What is the most probable distribution of the energies of the molecules in a gas? Yakovenko and a colleague argued in 2000 in The European Physical Journal B. “The exponential distribution is what you would call natural inequality—what you would get from entropy,” Yakovenko says.

This is not the place to argue with the analogy. I’m sure that I have mentioned the second law of thermodynamics often enough throughout my blog to convince everybody that almost everything in the Universe can be defined as physics. My wife (a psychologist) threatens to divorce me every time that I use that argument, and she is probably right to do so.

The ancient root of the 1%:

The article starts with the following sentence, “Don’t blame farming. Inequality got its start among resource-rich hunter-gatherers.” It then continues to develop the historical evolution of economic inequality mainly based on archeological and anthropological evidence:

Such economic disparities were common in the Roman Empire, where 1.5% of the empire’s households controlled 20% of the income by the late 2nd century C.E., according to one recent study.

Inequality has deep archaeological roots. Yet if existing traditional societies are any guide, our hunter-gatherer ancestors were mostly egalitarian (see sidebar, p. 824). How and when did a few members of society begin to amass wealth? Relying on evidence from the Near East, researchers suggested that the earliest elites emerged after 10,500 years ago, when people successfully domesticated plants and animals and settled in large permanent villages. In this view, agriculture led to the production of surpluses and the emergence of managers, craftspeople, and other specialists, who eventually gained control over extra resources.

Now, analyses of archaeological sites as well as ethnographies of traditional societies are etching a more complex picture, suggesting that some ancient hunter-gatherers may have accumulated wealth and political clout by taking control of concentrated patches of wild foods. In this view, it is the ownership of small, resource-rich areas—and the ease of bestowing them on descendants—that fosters inequality, rather than agriculture itself.

Income inequality in the developing world: 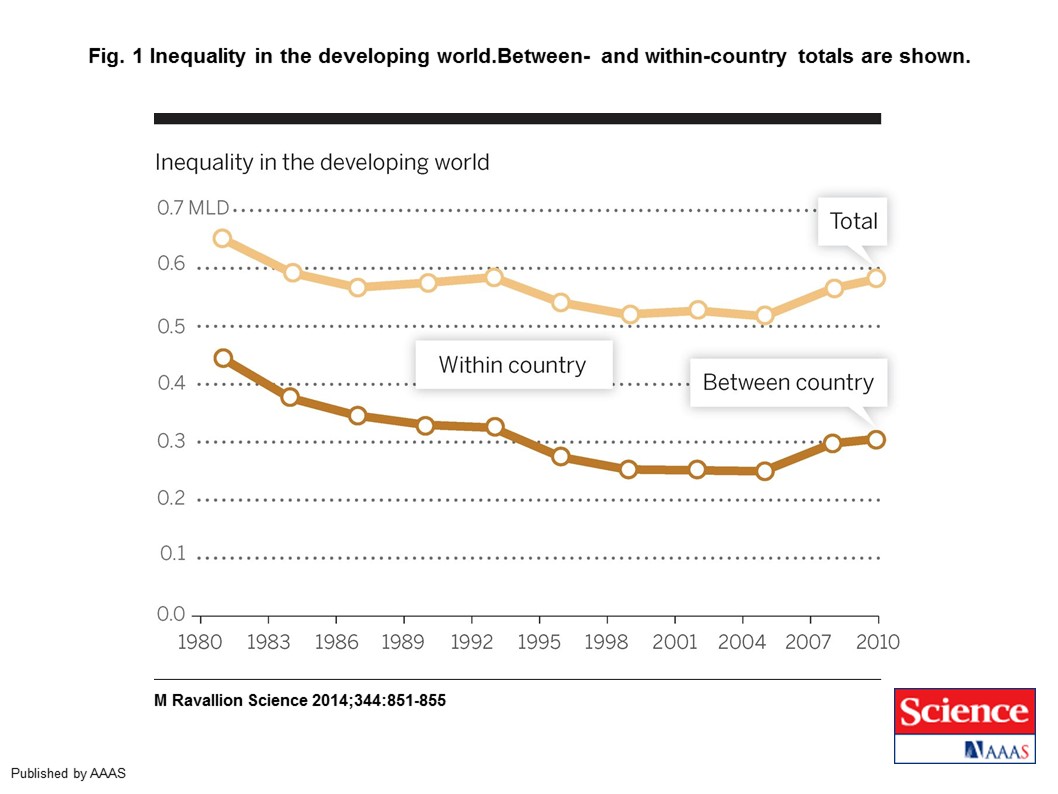 This short review summarizes inequality data for 130 developing countries by using household surveys. The measure of inequality (MLD) was designed to differentiate between inequality within countries and inequality between countries. It is designed to have similar characteristics to the more widely used Gini Coefficient, where MLD = 0 represents perfect equality while MLD = 1 represents “perfect” inequality, where all of the resources are concentrated in a single hand. One of the criticisms of Piketty’s work that I mentioned last week was that the inequality in the developing countries is decreasing, not increasing. The figure shows this is true (at least from 1980) for inequality between countries, but it is not true for inequality within countries, which seems to increase with time.

The same issue has another related article, “While emerging economies boom, equality goes bust,” by Mara Hvistendahl that deals with individual big developing countries like China and India and arrives at the same conclusion.

I will conclude this blog with a very short description of a course that I teach to senior undergraduate and graduate students in physics: “Physics and Society.” Part of the rationale for the course reads as follows:

Merriam Webster Dictionary defines Physics, among other definitions, as: science that deals with the structure of matter and the interactions between the fundamental constituents of the observable universe. The goal of physics is to formulate comprehensive principles that bring together and explain all discernible phenomena.

With a population of 7 billion people (October 2012) and growing, humans are unquestionably part of the physical environment.

Most of our graduate students see a Masters degree as the end of their education, one that holds the promise of increased job opportunities. The course’s objective is to explore career opportunities beyond the usual boundaries of textbooks, expanding to include real-world applications that are not restricted to textbook physics. Income inequality is an important topic in this course.

Micha Tomkiewicz, Ph.D., is a professor of physics in the Department of Physics, Brooklyn College, the City University of New York. He is also a professor of physics and chemistry in the School for Graduate Studies of the City University of New York. In addition, he is the founding-director of the Environmental Studies Program at Brooklyn College as well as director of the Electrochemistry Institute at that same institution.
View all posts by climatechangefork →
This entry was posted in Climate Change and tagged 1%, 99%, Agriculture, Income, Income Inequality, Inequality, Physics, Piketty, Science, Science Magazine, Thermodynamics, Thomas Piketty. Bookmark the permalink.