Working for the Future

Posted on January 10, 2017 by climatechangefork

I am here to advocate for Wayne Gretzky’s maxim and “dump” Albert Einstein’s prediction. This is a painful thing to do for a physics professor who has never played ice hockey in his life. Gretzky’s hockey can serve as metaphor for everything we do, including our attempts to save the planet from a sixth mass extinction. We all spend the days following the New Year hoping, praying and making resolutions to ensure that our future, as well as that of our friends and family, our country, and the world, will be better than what we have just lived through. Given that there are just a few days before our new president’s inauguration, it is time to confront his motto of “make America Great Again.” Not only does he not need to fulfill this campaign promise, we must all work to prevent America and the world from becoming worse than they currently are.

The New Year is also a great time to meet family and friends to talk through big issues and what we can do to shape a better future. As long as these chats remain abstract, there are no problems. We all want a safe world – on a local, national and global level; we want better education for our children; we want to pay fewer taxes. When the issue of climate change comes up, I often hear, “But that is just a prediction! Those are all based on computer projections, depending on certain models that we simulate. What happens if the models are wrong and we have made sacrifices for nothing?”

The future will always be uncertain. Playing where we think the puck is going to be is a risky proposal; there is always the chance that we will guess wrong and/or that an opposing player will reach the puck ahead of us and change its trajectory. Taking that risk is what differentiates good players from great players; good teams from great. Einstein’s quote is a worst-case scenario predicting a sixth mass extinction. He provides no hint of what we can do to change the trajectory to a safer target.

Trying to predict the future is a popular activity. Below are six books whose attempts at such cover a wide spectrum. I have read each of them and they now sit safely on my shelf: 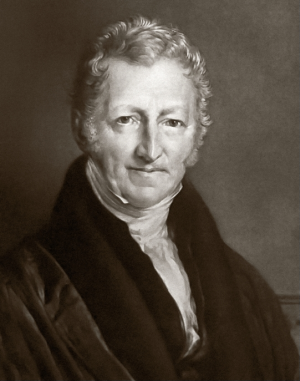 To my knowledge, the father of scientific attempts to  predict the future in the context of human existence was Robert Malthus (1766-1834). An English economist, he looked at two key components of our future: population growth and food supply (picture in the cover of “population growth”). I will come back to these next week. According to Malthus, population increase follows an exponential growth, while any increase in food supply can – at best – follow a linear pattern. With these two different growth models, human population increase will quickly surpass the available food supply and lead to the collapse of civilization. This issue continues to occupy researchers today; Limits to Growth: the 30-Year Update follows up on this theory.

When I started my professional career, Herman Kahn was a favorite futurist. His predictions were for the year 2000; comparing those to the realities of 2000 is fascinating.

A recent issue of Scientific American (September 2016) focused on the future and trying to figure out the 20 biggest questions facing humanity. They posed questions to leading scientists and asked their opinions. This was the latest in their annual “World Changing Ideas” series looking at exciting practical breakthroughs with functioning prototypes that have the potential to make important changes in our lives. In this issue they went further than usual by asking questions relevant to longer-term and more abstract projections.

Michio Kaku, a professor of physics at the City University of New York and master of writing about complex issues of physics in a way that is accessible to the general public, followed a similar route as the September 2016 issue of Scientific American but broadened his focus. He was fine with exploring more abstract concepts so long as they didn’t violate the laws of physics.

Asking very clever, accomplished people what they think the future will bring is a lot like asking a bench full of expert ice hockey players sitting in the stands at a particular hockey game where the puck will end up. They will provide professionally sound commentary that will be absolutely irrelevant to the game that is being played on the ice.

I recently read Yuval Harari’s Homo Deus; he is an Israeli historian of some note and puts forward his view of humanity’s future. For those of us challenged in Latin, Homo is man or human (as in Homo Sapiens), while Deus refers to God or a deity. Harari’s implication is that man will become a deity, in the sense that he will have eternal life. As far-fetched as this concept sounds, attempts to prolong human life beyond the present limits of slightly more than 100 years are being widely pursued – including by people with significant means.

Anybody that has visited Cuba within the last several decades (January 26, 2016 Blog) knows that one can take a ride in a perfectly functioning (and beautifully kept) 1950s American Chevrolet. Granted, that doesn’t necessarily mean that every part of the automobile that was constructed over 60 years ago is still functioning without a hitch today. What the Cubans have learned to do is to replace any parts that stopped working or were wearing down with new parts – either manufactured locally or imported from countries without sanctions against them (Russia was a favorite supplier for many years). The idea is, if you can do it with American cars you should eventually be able to do it with human beings as well. Whether the 500-year-old human being that will emerge will resemble the “original” remains unknown.

What “eternal life” will do to the population of the planet is not being addressed.

Looking at the future as a game or an exercise is fine but it is not a very productive exercise unless you try to take some control of the trajectory.

I will modify Gretzky’s original quote as follows: “A good hockey player plays where the puck is. A great hockey player plays where the puck is going to be, trying to change or enforce a trajectory that ensures victory.” Both in hockey and in the game of global survival, victory requires a team of great players that cooperate with each other to achieve the common objective.

2 Responses to Working for the Future