Am I Talking Out of Both Sides of My Mouth?

Posted on April 16, 2013 by climatechangefork

Last week’s blog was dedicated to Jim Hansen’s retirement and the central role that he has played in the Climate Change debate. It immediately garnered several comments from readers, none of which had anything to do with the blog.

All three comments focused on my personal life, referring to a local issue in which my wife played a major role, while I played a relatively minor one. The impression I got from the comments was that the individuals were attempting to get to her through me. Since this is my blog, and I am also the moderator, I could have easily blocked these comments.

However, the comments raised a few issues that are relevant to the main focus of this blog, so I will try to address them here. Some of these issues are personal and some are more general.

On June 2010, the City of New York decided to narrow a street (Prospect Park West, Brooklyn, NY) and construct a two-way protected bike lane, as shown below. 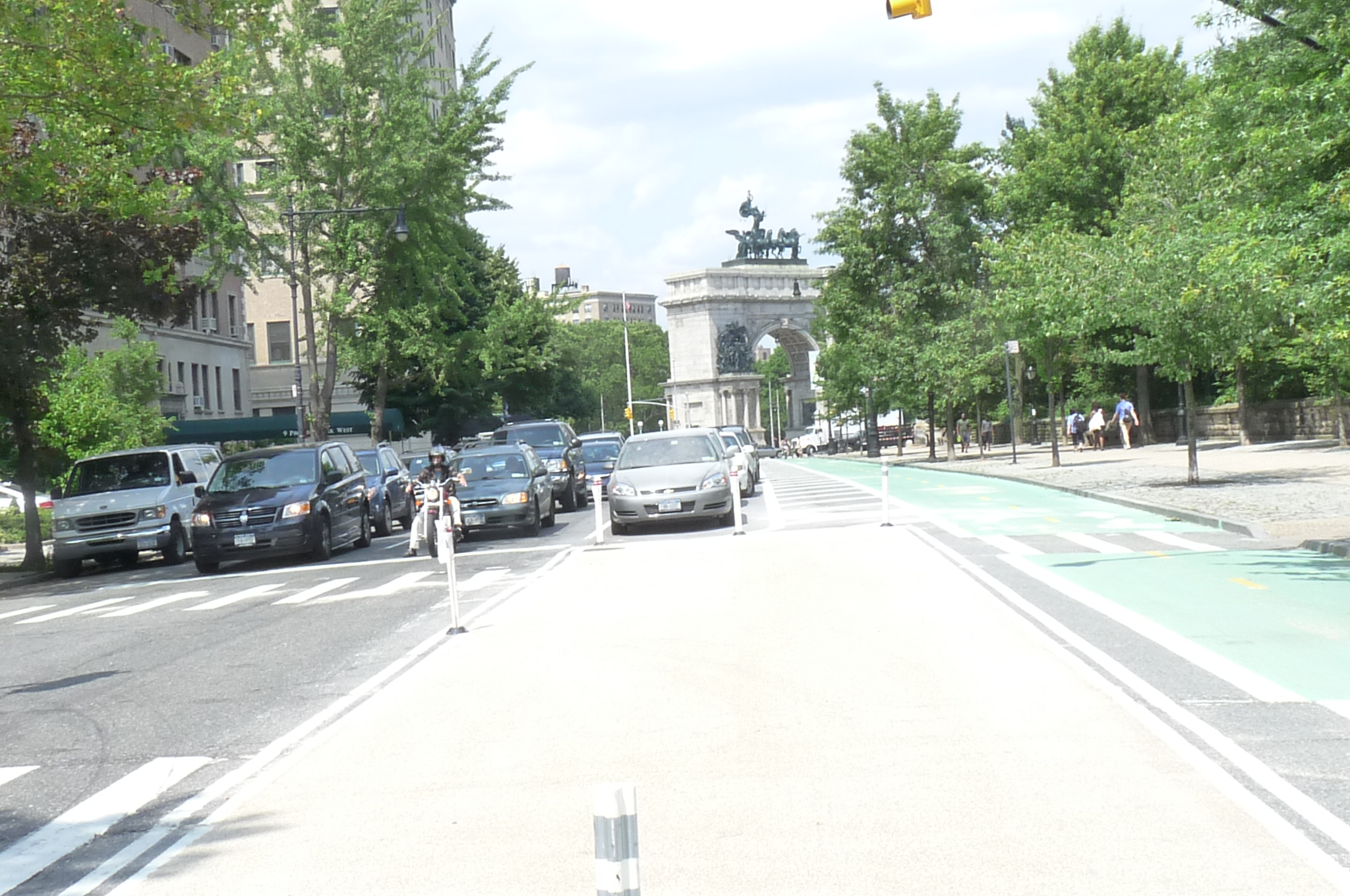 The city’s argument for the change was safety: the claim was that the multi-lane street caused speeding, which in turn led to traffic accidents. The street borders a large urban park (Prospect Park) that is already popular with bikers, especially during weekends.

The trend of replacing car lanes with bike lanes is not confined to New York City — it is global, and, almost everywhere, it triggers conflicts between car owners, bikers and pedestrians on how to share the common real estate. Two local organizations were formed to try to oppose the city’s change: “Neighbors for Better Bike Lanes” and “Seniors for Safety.” My wife is the president of the first organization and I am a member of the second. My wife and I happen to live in an apartment on the street in question, and our apartment was used to host a few of the meetings.

A common complaint raised in almost every such conflict – this one in Brooklyn being no exception – is that of a NIMBY (Not In My Back Yard) mentality. NIMBY, according to Wikipedia, is “a pejorative characterization of opposition by residents to a proposal for a new development because it is close to them, often with the connotation that such residents believe that the developments are needed in society, but should be further away.”

Reading through the recent comments on my blog, I found common theme was an accusation that I am talking out of both sides of my mouth – preaching for the need to take steps to minimize the impact of Climate Change, while at the same time, fighting to block them if such steps take place near where I live.

As part of this course, I wanted to discuss the bike lane and try to figure out if such struggles can be classified as NIMBY. I wanted to invite my wife and the head of the local biking organization that was supporting the change to talk to the class. I couldn’t do it because the issue was litigated but I tried to address the issue through data analysis that included publicly available data that were collected by the pro-bikers group. The main question that I wanted to address with the class was whether or not this was an environmental issue in the first place. The city never claimed that it was an environmental issue; they claimed that this was a safety issue. Safety issues need to be backed by data. According to the groups that oppose the move, the data were not there. An environmental assessment of the move was never performed. If use was supposed, as the comments claim, to lower carbon footprints – there were strong arguments that it might achieve the opposite.

In terms of carbon footprints, NYC is one of the most sustainable cities in the United States. A recent inventory of NYC greenhouse gases is shown below: 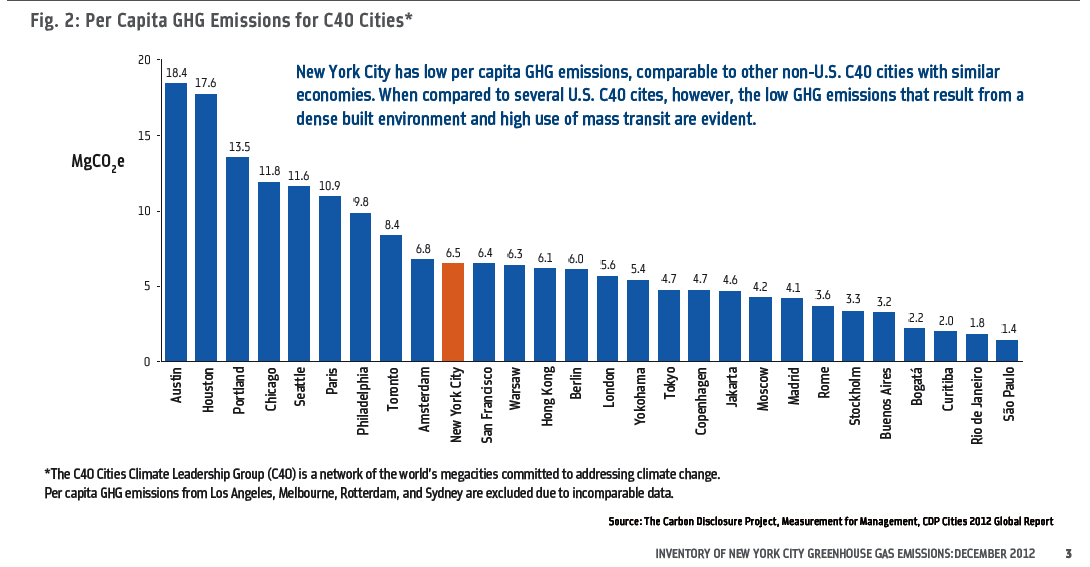 About 75% of NYC’s total emissions come from buildings, with another 22% coming from transportation. Among NYC’s commuters, 55% use public transportation. In fact, 54% of households are without cars and 10% of residents walk to work. The relative contribution from bikes is rather small in this area. Also, most of the bikers that use this bike lane are recreational bikers – not commuters.

Surprisingly, slowing traffic speed to below the average of 30 mph (the speed limit in residential streets in NYC), actually increases gas consumption by about 30%.

Analysis of the environmental impact of such a change doesn’t stand up to scrutiny, thus making it difficult to characterize this issue as a NIMBY issue. As a safety issue, on the other hand, is a completely local issue that needs to be supported by data. The main argument in this debate is that the data do not support the claim. NIMBYism is a major obstacle for policy implementation of steps that are designed to mitigate impacts. I did discuss many aspects of this in previous blogs (June 18, July and August 27 – 2012), but this doesn’t mean that conflicts between local communities and government should be avoided. The constant scrutiny is beneficial and actions that impact communities need to be supported by data and the data should withstand scrutiny.

Now that I have addressed this issue, I hope that my little fight over a road near my apartment will disappear as a topic from this blog. It doesn’t belong here.

Micha Tomkiewicz, Ph.D., is a professor of physics in the Department of Physics, Brooklyn College, the City University of New York. He is also a professor of physics and chemistry in the School for Graduate Studies of the City University of New York. In addition, he is the founding-director of the Environmental Studies Program at Brooklyn College as well as director of the Electrochemistry Institute at that same institution.
View all posts by climatechangefork →
This entry was posted in Climate Change and tagged Bike Lane, Bikes, Brooklyn, Climate Change, Climate Change Deniers, Comments, Local, NIMBY, Personal. Bookmark the permalink.

3 Responses to Am I Talking Out of Both Sides of My Mouth?