The IPCC, the Burning House, and the 100% Tipping Point

Posted on October 15, 2013 by climatechangefork

Following the publication of the IPCC Working Group I’s 5th assessment report (AR5), I posted my own response (October 1). I addressed the issue of raising the confidence level of significant human contributions to climate change to 95% – or “extremely likely.” Deniers have made the claim that 95% confidence is not enough to necessitate that we all engage in a massive effort to minimize the impact by changing behavior. They require 100% certainty before they are willing to take preventative actions. I took a rather dim view of that position, which I have summarized as follows:

The other side of this issue is that if a fire inspector were to find a 95% chance that our house would catch fire, he would tell us to fix the vulnerability immediately, especially given that no insurance company in the world would be willing to insure us. The only time that we can be 100% certain that the house is going to catch fire is after the house is already aflame. At that time, the only thing left to do is to try to get out as fast as possible. Presently we cannot get out of this planet – we have no place else to go.

Here I would like to expand on this issue.

Malcolm Gladwell defines Tipping Point as: “the moment of critical mass, the threshold, the boiling point.” The term has become a central feature in the climate change debate (often identified as a “large scale discontinuity”).  I have used it repeatedly on this blog site (just use the search facility for access). I consider the transition from 95% to 100% certainty to be the mother of all tipping points – it is a threshold jump from future to past: the jump from having some ability to affect future data to the inevitable eventuality where the only available option is to try to minimize the effects of events that have already occurred.

When I Google “Physics of the Future,” I mostly turn up entries from Michio Kaku’s (a fellow faculty member at the City University of New York) recent book by that title. His book describes the wonders that we might or might not discover in the distant future as we explore the boundaries of Physics. But the term has another description that is shown in a famous diagram given below.

The diagram describes the path that a flash of light, emanating from a single event (localized to a single point in space and a single moment in time) and traveling in all directions, would take through spacetime. It derives from Einstein’s Special Theory of Relativity. The double cone is anchored on the premise at the heart of the theory, which postulates that although the speed of light is the fastest speed that can be attained, it is still a finite speed. It can be generalized to our ability to gather information by postulating that the only way that we can gather information is through shining light on the object that we are interested in and analyzing the light that comes back. Since light travels at a finite speed, it takes time for the light to move to the object and get back reflected to us. Based on such an interpretation, the two cones in the figure represent the maximum information that we can attain. The walls of the cones are presented on a scale of the time multiplied by the speed of light. The upper cone represents the future, while the lower cone represents the past. In the middle, we have the present – the here and now. We have no available information about the present because it takes time to gather the information. 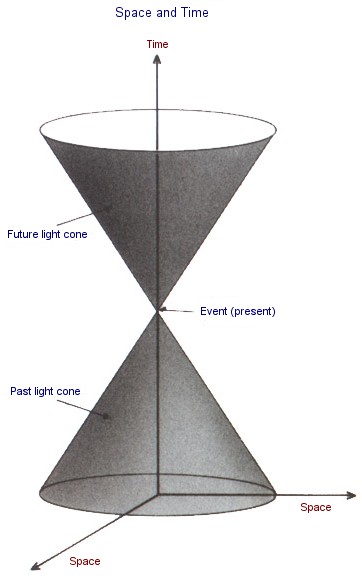 The transition from a 95% probability of our house catching fire to the 100% certainty that our house is actually on fire fits Gladwell’s definition of a tipping point probably better than any other phenomenon – we move from predicting an event to either observing or (if the event itself has a finite duration) having just observed said event.

I subscribe to the Popperian definition of the scientific method that is based on refutability and denies the existence of “general truths.”  A theory is “true” until it is refuted by observations; if it cannot be refuted – it is not science.

Refutability is a statement about our ability to make predictions of the future and then observe whether those predictions are coming true or not. 100% certainty doesn’t exist in science.  As a rule, if something is 100% certain, it is not science.

I will finish this blog with a quote that I used in a previous blog (September 3, 2012) from an address by Luiz Inácio Lula da Silva, the former (2003-2010) president of Brazil, in a reported comment on the European fiscal crisis: “Let’s be frank: if Germany had resolved the Greek problem years ago, it wouldn’t have worsened like this. I’ve seen people die of gangrene because they didn’t care for a problematic toenail.”

The problematic toenail was a predictor of what might have happened in the future. Once a serious gangrene takes over, there is very little that we can do. Between gangrene and a burning home, we have indicators of an impending disaster (or series thereof) – why should we wait for an eventuality to become an actuality?

Micha Tomkiewicz, Ph.D., is a professor of physics in the Department of Physics, Brooklyn College, the City University of New York. He is also a professor of physics and chemistry in the School for Graduate Studies of the City University of New York. In addition, he is the founding-director of the Environmental Studies Program at Brooklyn College as well as director of the Electrochemistry Institute at that same institution.
View all posts by climatechangefork →
This entry was posted in Climate Change and tagged AR5, Climate Change, Climate Change Denial, Climate Skeptics, DNNer, Environment, Global Warming, IPCC, Karl Popper, Light Cone, Malcom Gladwell, Michio Kaku, Physics, Science, Spacetime, Stephen Hawking, Theory of Special Relativity, Tipping Point, WGI. Bookmark the permalink.

1 Response to The IPCC, the Burning House, and the 100% Tipping Point