China – How Many Cars Can a City Handle?

Posted on August 11, 2015 by climatechangefork

Right now, China has the largest global market for new cars. According to the last count by the International Organization of Motor Vehicles Manufacturers, there are 833 million light vehicles currently (2015) in use worldwide. About 10% of these cars (around 83 million) were bought in 2014. Out of that 83 million, 21 million went to China, while the US, the second largest buyer, bought close to 16 million. In other words, China – which still counts as a developing country (see July 28th blog) – bought about one quarter of all cars sold throughout the world. These numbers put China’s share of automobiles roughly in line with its current share of the global GDP, which is approximately 13%.

I visited several Chinese cities and was astounded at how much the traffic flow differs from that in New York City, where I live. The traffic is heavy but in most instances it flows smoothly; the roads are great and the traffic control systems work better than I have ever seen elsewhere. 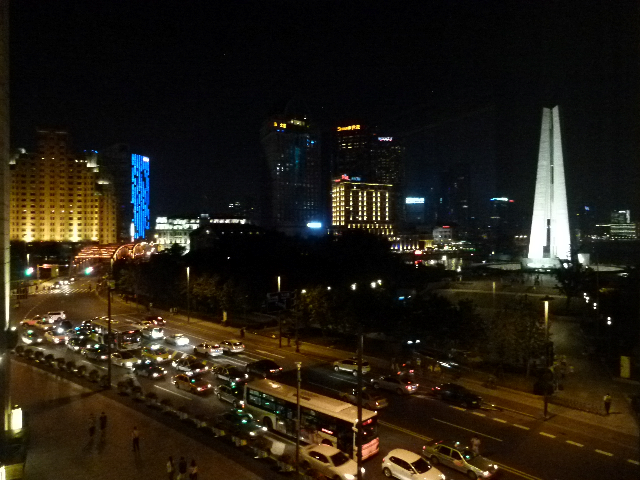 Shanghai (these photos are from my trip) 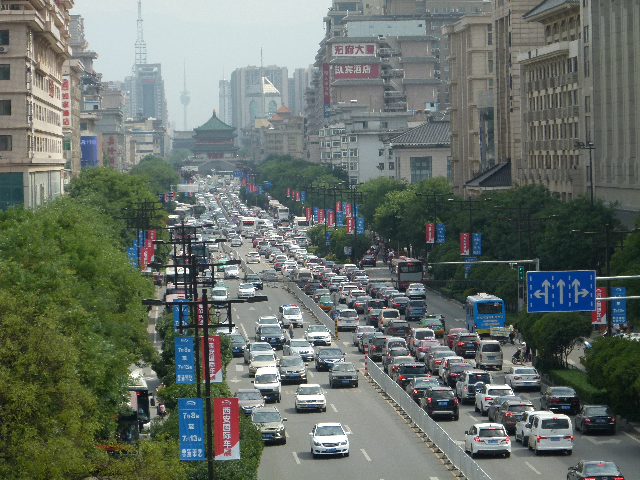 I visited both of these two cities as well as Beijing 20 years ago – at which time the dominant traffic on the roads was made up of bicycles – so this dramatic change has taken place within the span of less than a generation. What changes will develop within the next generation?

In a report by China SignPost, a western consulting firm, we find a bit more detail. The two figures below show a summary of private car ownership in 36 Chinese cities in comparison to some major cities in developed countries outside of China. My home city, NYC, is on the list. As we will see in a future blog, the definition of “selected metro areas” especially in China, is open to discussion (e.g. where exactly the borders are). I checked the original reference for NYC, which only counts those residents within the five boroughs – a population of 8.4 million people. Beijing’s population is 11.5 million on the same basis (excluding suburbs, etc.). The figure also shows Houston, TX, with its population of 2.2 million for comparison. NYC has one of the lowest car ownership ratios per person in the US – largely due to the extent of the public transportation system. Figure 2, from the same source, provides the per-capita numbers for car ownership. Again, when calculating that 22% of NYC residents own cars, refer to the city itself, not to the entire metropolitan area. This stands against 21% car ownership in Beijing, 18% in Xian, and 11% in Shanghai. The figure also adds a horizontal band that stretches between 25-30% cars per person and indicates a “saturation point,” at which car ownership plateaus. The assumed plateauing seems to be independent of quality of the road, traffic management or availability of affordable alternative transportation modes. The main issue that I want to address in these next few blogs is the steps China is taking to actively keep the number of cars in its cities from growing further.

The numbers that I got on the ground, from speaking with the locals in some of these cities we visited, were considerably higher than demonstrated above. Meanwhile, the compilation of 36 cities in Figure 1 only represents about 30% of China’s total car ownership, which includes a fleet of 93 million private passenger cars. City after city is now starting to conclude that enough is enough. My Chinese friends have long predicted that the growth rate, at least in terms of private cars in their cities, cannot continue at its present pace. Many of China’s major cities are taking similar steps to those being taken by developed countries – e.g. building the best public transportation systems that they can. I “tested” the underground system in Shanghai and found it competitive with the best systems that I have seen elsewhere.

Hong Kong is now part of China, but I will cover it separately in future blogs. It is one of the richest cities in the world, and was only recently re-incorporated into China as a result of an agreement with the British government. The latest accounting of the city’s transportation issues shows that Hong Kong has 500,000 private cars for a population of about 7.5 million people. This comes out to 6.6% of the population, which would fall within the far left side of Figure 2. Meanwhile, however, a few of the largest cities in China are now taking drastic steps to limit car ownership – a fact that I was completely unaware of until my visit. The details of what these cities are doing are important to all of us; I will explore some of these steps next week.

Micha Tomkiewicz, Ph.D., is a professor of physics in the Department of Physics, Brooklyn College, the City University of New York. He is also a professor of physics and chemistry in the School for Graduate Studies of the City University of New York. In addition, he is the founding-director of the Environmental Studies Program at Brooklyn College as well as director of the Electrochemistry Institute at that same institution.
View all posts by climatechangefork →
This entry was posted in Climate Change and tagged Beijing, car ownership, Cars, China, Economics, Emissions, Environment, Fossil Fuels, Gas, Gasoline, GDP, Global Population, Hong Kong, New York, New York City, NYC, Oil, Population, saturation point, Science, Shanghai, Sustainability, Technology, traffic, World Population, Xian. Bookmark the permalink.

1 Response to China – How Many Cars Can a City Handle?