The Arctic: We’re Going to Lapland!

Posted on January 15, 2019 by climatechangefork

I don’t have too many things on my bucket list but my wife and I have decided to use our winter school vacation to cross off one item from both our lists: going to see the aurora borealis (northern lights). As an added bonus, I’ll try to observe the impacts of climate change on the Arctic and report my findings to you.

Our destination is the area of Lapland, located at the northern part of Scandinavia, where Norway, Finland, and Sweden meet. 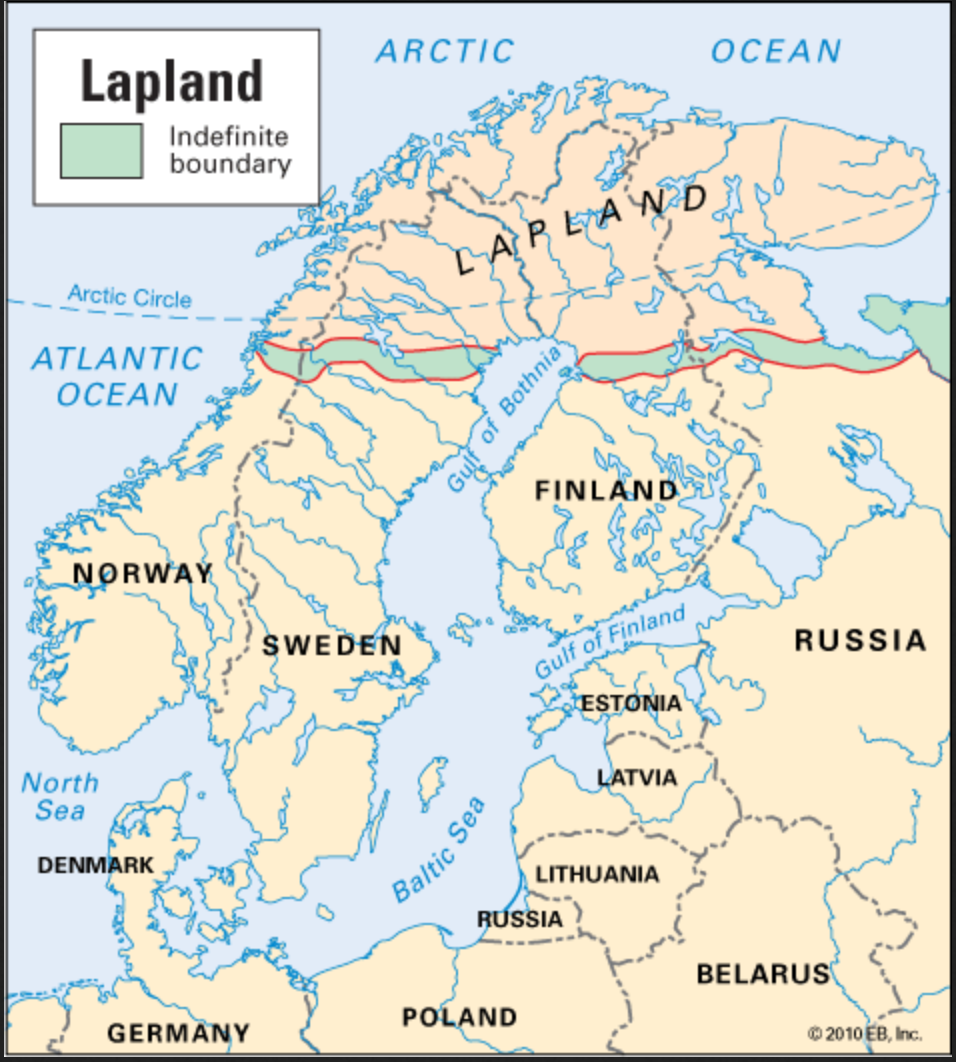 Figure 2 shows the specific locations that we will visit as we travel from Tromso, Norway to Lulea, Sweden. I used someone else’s map since we’re going to the same places – I didn’t bother to erase the original Japanese markings. 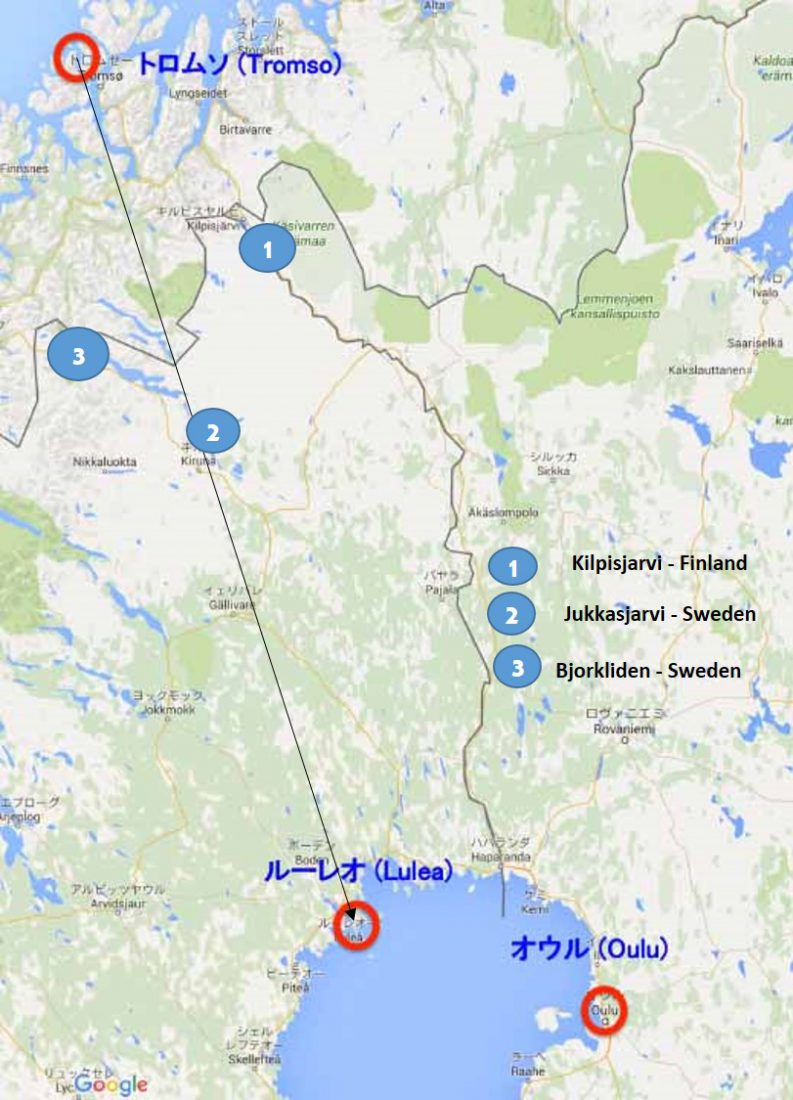 Figure 2 – Our two-week trip from Tromso, Norway to Lulea, Sweden with the three stopovers in between

Figure 3 shows NOAA’s readings of the rising temperatures in the Arctic, as compared to the global average. 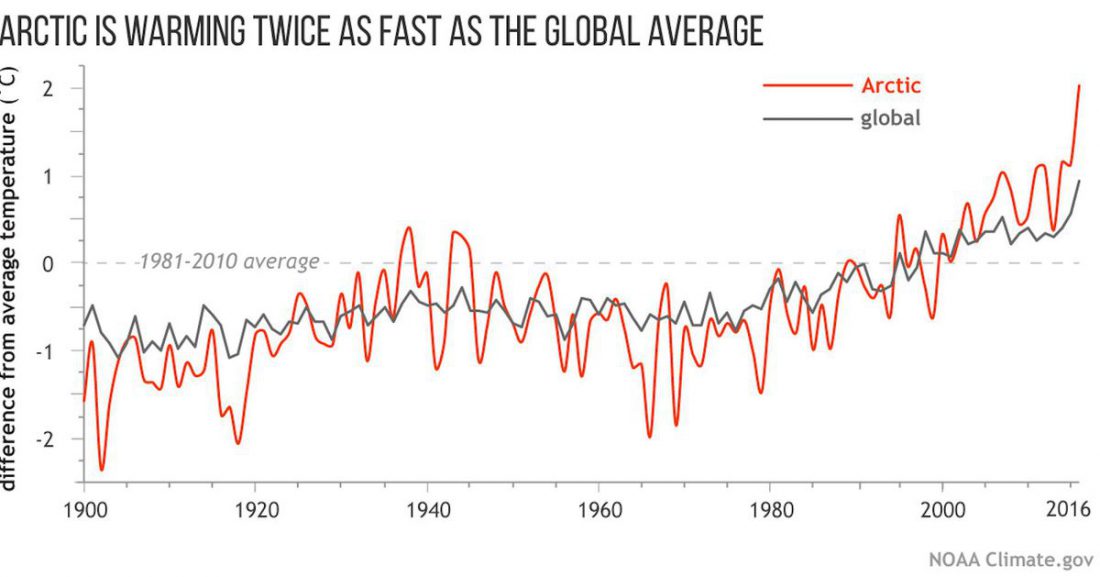 – Surface air temperatures in the Arctic continued to warm at twice the rate relative to the rest of the globe. Arctic air temperatures for the past five years (2014-18) have exceeded all previous records since 1900.

– Despite increase of vegetation available for grazing, herd populations of caribou and wild reindeer across the Arctic tundra have declined by nearly 50 percent over the last two decades.

– In 2018, Arctic sea ice remained younger and thinner, and covered less area than in the past. The 12 lowest extents in the satellite record have occurred in the last 12 years.

– Microplastic contamination is on the rise in the Arctic, posing a threat to seabirds and marine life that can ingest debris.

The NOAA report only marginally mentions permafrost but a recent article by Jan Hort et. al. in Nature Communication posits that, “Degrading permafrost puts Arctic infrastructure at risk by mid-century.” The abstract of this article is given below, along with Figure 4, which maps the hazard potentials across the Arctic.

Degradation of near-surface permafrost can pose a serious threat to the utilization of natural resources, and to the sustainable development of Arctic communities. Here we identify at unprecedentedly high spatial resolution infrastructure hazard areas in the Northern Hemisphere’s permafrost regions under projected climatic changes and quantify fundamental engineering structures at risk by 2050. We show that nearly four million people and 70% of current infrastructure in the permafrost domain are in areas with high potential for thaw of near-surface permafrost. Our results demonstrate that one-third of pan-Arctic infrastructure and 45% of the hydrocarbon extraction fields in the Russian Arctic are in regions where thaw-related ground instability can cause severe damage to the built environment. Alarmingly, these figures are not reduced substantially even if the climate change targets of the Paris Agreement are reached. 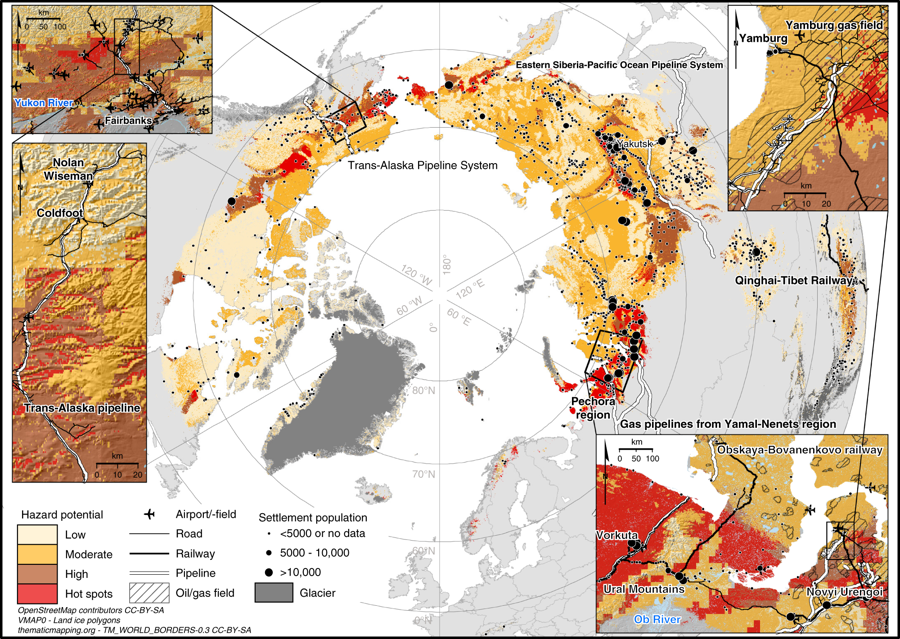 Scandinavia looks small on this map but one can see a red dot in the area where we will be traveling (just left of the bottom right-hand inset). One of the most important points in my trip will be to observe the impact of the melting permafrost. More on that next week.