Posted on November 15, 2022 by climatechangefork 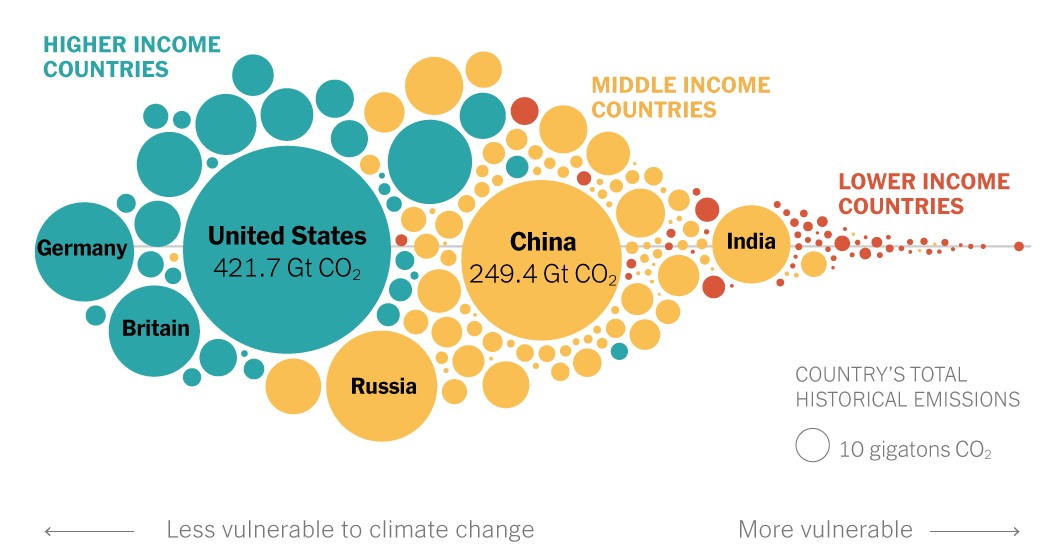 Figure 1 – Historic cumulative emissions of countries (size of the circles) as a function of their vulnerabilities to climate change (Source: The New York Times)

It is now the second week of COP27 and the last month of my current semester. I asked my students if they have any idea what COP entails and whether they follow its progress. Of the three climate change-related courses that I teach, I got a positive answer from only one student. Test yourself on the two questions and let me know. Put COP26 in the search box and you will get 13 entries. COP is an abbreviation of Conference of Parties; it’s been held yearly since 1995 and is the preferred global meeting for world leaders to discuss global issues related to climate change. You can follow the COP27 process through the UN link and get the list and locations for all previous (and some future) meetings on the Wikipedia site.

COP27 started on Sunday, November 6th, in the Egyptian resort of Sharm El Sheikh, and is scheduled to conclude this Friday, November 18th. I am writing this blog through the end of the first week of the meeting. As it seems now, COP27’s main topic is developing countries’ ability to find resources to fund both adaptation and mitigation of climate change. To put the issue a bit differently, the conference appears to focus on the role of equity in confronting climate change. I addressed this issue in a previous blog (August 4, 2020), “Inequity: The Intersection of Coronavirus, Poverty & Other Expected Trends,” where I posted a Venn diagram with equity in the center, surrounded by COVID-19, climate change, population, and jobs.

This blog will focus on the global issues of proposed mechanisms for moving resources from developed countries to developing ones. Next week, I will focus on what developing countries are supposed to do with the resources, should such mechanisms prove successful. Obviously, inequity is not only a global issue between rich and poor countries. It is also an issue that rich countries confront internally. Since adaptation to climate change needs to be addressed on local levels, I will try to address it toward the end of November.

The background for the effort to provide resources to developing countries confronting climate change can be seen in the top figure that plots the historic cumulative emissions of countries (size of the circles) as a function of their vulnerability, plotted on the horizontal axis.  If you plot the same data in terms of historic cumulative emissions per person vs. vulnerability, the figure will look quite different. I will return to this issue in future blogs.

A few catch-all terms are often used for the proposed mechanisms of moving resources from rich to poor. One is compensation:

SHARM EL-SHEIKH, Egypt, Nov 6 (Reuters) – Delegates from nearly 200 countries kicked off the U.N. climate summit in Egypt on Sunday with an agreement to discuss compensating poor nations for mounting damage linked to global warming, placing the controversial topic on the agenda for the first time since climate talks began decades ago.

The agreement set a constructive tone for the COP27 summit in the seaside resort town of Sharm el-Sheikh, where governments hope to keep alive a goal to avert the worst impacts of planetary warming even as a slew of crises – from a land war in Europe to rampant inflation – distract the international focus.

Such a mechanism is almost identical to reparations. It is based on the premise shown in Figure 1, which puts the rich countries (many of them shown with large circles) on the left side of the diagram. Historically these countries have accumulated their wealth through the use of fossil fuels; as a result, poorer countries are more vulnerable, with very few resources to adapt to the changes. Repayment in this approach is based on blame, although the largest emitter right now is China by a large margin.

An alternative approach, loss and damage, is based on needs:

The 27th annual U.N. climate talks, known as COP27, began yesterday. At the top of the agenda for developing countries is financing for loss and damage: Who will pay for the costs of a warming world?

For them, loss and damage is a matter of justice. They face irreversible destruction and want rich nations — which have emitted half of all heat-trapping gases since 1850 — to compensate them.

Wealthy nations blanch at accepting blame. The U.S. and the E.U. fear that such compensation could become an unlimited liability. Last year, wealthy nations vowed to provide $40 billion per year by 2025 to help poorer countries with adaptation, but a U.N. report estimates that this amount is less than one-fifth of what developing nations need.

In fact, one frequently cited study estimated that developing countries could suffer between $290 billion to $580 billion in annual climate damages by 2030, even after efforts to adapt. Those costs could rise to $1.7 trillion by 2050.

Some of the history of this dispute is summarized in the piece below:

SHARM EL SHEIKH, Egypt — For 30 years, developing nations have been calling for industrialized countries to provide compensation for the costs of devastating storms and droughts caused by climate change. For just as long, rich nations that have generated the pollution that is dangerously heating the planet have resisted those calls.

At the United Nations climate summit last year, only Scotland, the host country, committed $2.2 million for what’s known as “loss and damage.” But this week, the dam may have begun to break.

On Sunday, negotiators from developing countries succeeded in placing the matter on the formal agenda of this year’s climate summit, known as COP27, or the 27th session of the Conference of the Parties.

“The addition of loss and damage on the agenda is a significant achievement, and one that we have been fighting for many years,” Mia Mottley, the prime minister of Barbados, said on Tuesday. “We have a moral and just cause.”

A third alternative is now in development that more closely follows present practices of the rich world in financing perceived general social needs:

SHARM EL SHEIKH, Egypt — The World Bank and the International Monetary Fund were created 80 years ago to rebuild countries devastated by World War II and to stabilize the global economy. But an expanding group of world leaders now say the two powerful institutions need a 21st century overhaul to handle a new destructive force: global warming.

There is growing momentum behind a set of ideas that would fundamentally overhaul the two powerful financial institutions, which frequently loan or grant money from rich, industrialized nations to developing countries. The proposals are rapidly gaining traction among heads of state, finance ministers and even leaders of the bank and the fund, who are all meeting now at the United Nations climate summit known as COP27.

But as climate change continues to deliver a cascading series of hurricanes, floods, drought and fires, poor nations have found themselves victims of not only extreme weather but of the financial institutions designed for a different age. They are desperate for funds to recover from climate disasters while also starved for money to prepare for the next calamity. They are saddled with debt yet need to invest in a transition away from fossil fuels so they can lower the emissions that are heating the planet and causing so much damage in the first place.

The issue is now starting to expand beyond blame and resources to include health. On top of the lack of financial resources for proper adaptation to climate change-caused destruction or mitigation through changing energy sources, many poor countries are in desperate need of medical help. We know, for instance, that climate change brings a higher vulnerability to medical threats (see the guest blog from August 27, 2019).

Organizations such as Doctors Without Borders/Médecins Sans Frontières (MSF) are realigning their structures to accommodate these needs:

NEW YORK/GENEVA, NOVEMBER 4, 2022—Teams with the international medical humanitarian organization Doctors Without Borders/Médecins Sans Frontières (MSF), the International Committee of the Red Cross (ICRC), and the Red Cross and Red Crescent Movement see each day that climate change is not a distant threat; it is already dramatically affecting vulnerable people across the globe. In advance of the start of the annual UN COP27 climate conference on Sunday, the organizations call on world leaders to live up to their commitments under the Paris Agreement and Agenda 2030 to help ensure that vulnerable and conflict-affected people are adequately supported to adapt to a changing climate.

“We must collectively find solutions and ensure access to adequate climate finance in challenging environments,” said leaders of the organization in a joint statement today. “Leaving people behind is not an option.”

People who are affected most by the changing climate also often face armed conflict and health emergencies. In fact, of the 25 countries that are most vulnerable to climate change and least ready to adapt, the majority are also experiencing armed conflict. In many of these locations, people lack access to basic health care. People’s lives, health, and livelihoods are threatened when climate shocks occur in countries with limited food, water, and economic resources.

As I mentioned earlier, next week’s blog will investigate how developing countries plan to use newly available resources if some of these wealth transfer mechanisms are approved at COP27.

Micha Tomkiewicz, Ph.D., is a professor of physics in the Department of Physics, Brooklyn College, the City University of New York. He is also a professor of physics and chemistry in the School for Graduate Studies of the City University of New York. In addition, he is the founding-director of the Environmental Studies Program at Brooklyn College as well as director of the Electrochemistry Institute at that same institution.
View all posts by climatechangefork →
This entry was posted in Climate Change, COP, UN. Bookmark the permalink.