As it happens, this week’s New York Times was helpful to a guy like me who comes from the science end of this spectrum. A magazine article by Adam Davidson, entitled, “Boom, Bust or What? Larry Summers and Glenn Hubbard Square Off on Our Economic Future” (NYT-May 5, 2013) has tried to capture the essence of two apparently opposite economic approaches by interviewing the two influential economists. I have included a few illustrative snippets below:

Summers segued to an explanation for how he chose a career in economics. The field, he said, provided tools that can be used to make the world, or a basketball team, better. The key is reading data and recognizing what it tells you.

[Hubbard] ticked off a series of empires: Rome, medieval China, Spain, 19th-century Britain — and argued that they fell because their leadership ossified and squashed free trade, technological progress or other forces of economic growth.

In the late ’70s and early ’80s, they were young academic stars, part of a revolution in economics taking place at Harvard. New computer technology and large data sets allowed them to explore with unprecedented precision how government policy affected the economic behavior of people and companies. Many of their peers went on to become influential public figures. Jeffrey Sachs, Paul Krugman, Ben Bernanke and Greg Mankiw were all at Harvard or nearby M.I.T. around the same time. But by the 1990s, it was Hubbard and Summers who, above others, translated the leading economic research into Washington policy.

Through their own work and that of their protégés, much of the economic policy now advocated by moderate Democrats can be traced to the ideas of Summers. (“I’m progressive, but not of the ideological left,” Summers told me.) And many Republican policies, especially dealing with taxation, can be credited, in some way, to Hubbard on the right. (“I’m a pragmatist,” he says of his conservatism. “I’m not doctrinaire.”) The space between their views roughly defines the American center.

Hubbard argues that the imperative of the moment — our 3-point shot — is rolling back federal benefits for wealthier and middle-class Americans. If it’s done right, he says, taxes will fall and “more entrepreneurs will start businesses. Corporate investment would rise, creating more jobs. Individuals will work harder and save more. The country would have faster growth. The benefits are quite broad.” If we stay the present course, though, Social Security, Medicare and Medicaid will keep growing unchecked, and the United States, paralyzed by debt, could burn like Rome. Summers, who once told me “I don’t do apocalypse,” acknowledged that some entitlement reform is inevitable, but that it is not the real adjustment that needs to be made. “That is playing defense,” he said. “It is essential but insufficient.” Instead, Summers wants the country to start playing offense: the crisis that demands our attention now, he says, is long-term unemployment. Millions of Americans have been out of work for more than half a year, many for much longer; not only are they suffering, but the overall economy is poorer without their contribution. Summers argues that the U.S. government can address this problem in several ways, especially by committing to more government spending, notably on infrastructure.

For two men who are so smart and analytical, neither could fully articulate how they came to understand their field in such fundamentally different ways. During our many conversations, each referred to opinions shaped early in life. Summers and Hubbard were born in the 1950s, but they had remarkably different upbringings. Summers’s parents were well-respected economists at the University of Pennsylvania. Two of his uncles won Nobel Prizes in the field, including Paul Samuelson, who advised President Kennedy and wrote “Economics,” an enormously influential textbook. His family and their friends were committed Democrats who celebrated the expansionary programs under Lyndon Johnson. Some of them even helped design those programs.

Hubbard, on the other hand, grew up in a remote agricultural town in Central Florida. His parents were public-school teachers. The programs that were beloved by Summers’s family struck many Southerners as another sign of government growing too large. Hubbard told me that a favorite book in high school was Friedrich Hayek’s “Road to Serfdom,” a 1944 treatise against big government that remains a sacred text among conservatives, including Paul Ryan.

These two men are of the same age, with the same educational background, and underlying tool sets based on data, yet they have come to completely opposite conclusions as to how society should run its economy. The only noticeable difference that Davidson was able to identify was the environment in which they grew up. They do seem to agree that society needs economic growth to function, though they argue about how to achieve the growth.

There are many commonly cited justifications for our supposed constant need for economic growth, including the demand to satisfy growing populations, and the perception that no-growth means decline (the decline of the big empires in Hubbard’s argument). I have written extensively on the perceived need for economic growth (see the February 11 blog), positing that no growth does not have to equal decline, but can instead mean an effort toward a productive, stable and flexible steady-state. The figure below describes three United Nation scenarios for population growth. 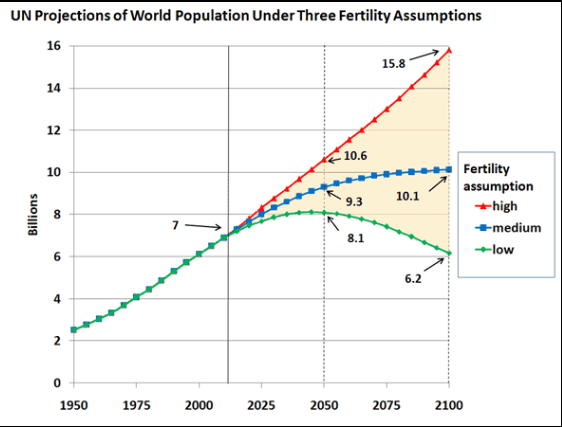 The most credible of these scenarios, and the one to withstand validation over many years, is the medium growth scenario that forecasts asymptotic stabilization over the second half of the century (in other words, the population levels off to a semi-constant number). To an ignorant physicist, Summers’ and Hubbard’s arguments, as presented by Davidson, look a lot like using hand-picked data to justify the heavily loaded philosophies they cultivated during their upbringing with heavily discounted future (February 4th blog). A correction in outlooks is badly needed.

Micha Tomkiewicz, Ph.D., is a professor of physics in the Department of Physics, Brooklyn College, the City University of New York. He is also a professor of physics and chemistry in the School for Graduate Studies of the City University of New York. In addition, he is the founding-director of the Environmental Studies Program at Brooklyn College as well as director of the Electrochemistry Institute at that same institution.
View all posts by climatechangefork →
This entry was posted in Climate Change and tagged Anthropocene, Bilingual, Climate Change, Economics, Global Population, Science. Bookmark the permalink.