Posted on May 7, 2013 by climatechangefork 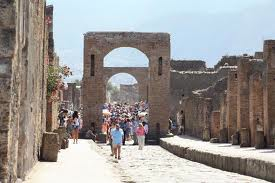 A recent article in the New York Times by Rachel Donaldo and  Elisabetta Povoledo (NYT, April 21 2013) titled  “The Latest Threat to Pompeii’s Treasures: Italy’s Red Tape,” starts with the following:

POMPEII, Italy — Destroyed by the eruption of Mount Vesuvius in A.D. 79, Pompeii survived excavation starting in the 18th century and has stoically borne the wear and tear of millions of modern-day tourists. But now, its deep-hued frescoes, brick walls and elegant tile mosaics appear to be at risk from an even greater threat: the bureaucracy of the Italian state. In recent years, collapses at the site have alarmed conservationists, who warn that this ancient Roman city is dangerously exposed to the elements — and is poorly served by the red tape, the lack of strategic planning and the limited personnel of the site’s troubled management.

The site’s decline has captured the attention of the European Union, which began a $137 million effort in February that aims to balance preservation with accessibility to tourists. Called the Great Pompeii Project, the effort also seeks to foster a culture-driven economy in an area dominated by the Neapolitan Mafia.

The rest of the article describes the difficulties encountered in the efforts to save the site.

Pompeii is not unique in this respect. Almost every other major archeological site, especially those that receive a major influx of cruise ship tourism, suffers from the corresponding degradation and damage. These are, of course, a major concern to everybody that cares about preserving our common heritage. Many of these sites do not have access to the same extensive public intervention to curb damage that Pompeii enjoys.

Pompeii is one of the 962 UNESCO sites (United Nations Educational, Scientific and Cultural Organization)  worldwide. UNESCO designates these sites as having special cultural or physical significance to humanity’s common heritage. The legal protection of the sites is anchored in international law:

UNESCO designation as a World Heritage Site provides prima facie evidence that such culturally sensitive sites are legally protected pursuant to the Law of War, under the Geneva Convention, its Articles, Protocols and Customs, together with other treaties including the Hague Convention for the Protection of Cultural Property in the Event of Armed Conflict and international law. Thus, the Geneva Convention treaty promulgates:

Article 53. PROTECTION OF CULTURAL OBJECTS AND OF PLACES OF WORSHIP. Without prejudice to the provisions of the Hague Convention for the Protection of Cultural Property in the Event of Armed Conflict of 14 May 1954, and of other relevant international instruments, it is prohibited:

(a) To commit any acts of hostility directed against the historic monuments, works of art or places of worship which constitute the cultural or spiritual heritage of peoples;

(b) To use such objects in support of the military effort;

(c) To make such objects the object of reprisals.

Unfortunately, our planet as a whole is not a designated UNESCO site. Planet Earth is not only of special cultural and physical significance to humanity’s common heritage; it is also essential to our continued existence. Sci-Fi visions of an evacuated Earth notwithstanding, we have no other place to go. Last year, our planet’s “visitor” count reached 7 billion- a growing number that leaves an irreversible collective impact. UNESCO designation does not shift responsibility for the designated sites from their sovereign countries, but it can provide some financial help when needed. The planet doesn’t have any centralized authority responsible for keeping its integrity intact to provide a suitable home for future generations. We badly need one.

Micha Tomkiewicz, Ph.D., is a professor of physics in the Department of Physics, Brooklyn College, the City University of New York. He is also a professor of physics and chemistry in the School for Graduate Studies of the City University of New York. In addition, he is the founding-director of the Environmental Studies Program at Brooklyn College as well as director of the Electrochemistry Institute at that same institution.
View all posts by climatechangefork →
This entry was posted in Climate Change and tagged Climate Change, Earth, Environment, Global Population, Global Warming, Impact. Damage, Planet, Pompeii, Preservation, Science, UNESCO, Vesuvius. Bookmark the permalink.

2 Responses to Lessons from Pompeii