Hurricane Sandy, which struck the East Coast of the United States more than six months ago (October 2012), was the second-costliest hurricane in the recorded history of the United States . While climate scientists said that the storm was not directly caused by climate change, they did correlate it, and its intensity with the increasingly frequent extreme climatic events and rising sea levels that we associate with climate change. This, in turn, has been linked to human choices of energy sources. (Nov 5, 13 & 19, 2012; Jan 14, Apr 30, 2013 blogs). We have just passed an important marker in surpassing 400 parts per million in the Keeling Curve that measures the atmospheric concentrations of carbon dioxide in Mauna Loa, Hawaii. Meanwhile, the frequency of extreme weather events is predicted to rise. Society’s response to the threats is focused on attempts to mitigate and adapt. I have written extensively about both, throughout this blog, recently (April 30 blog) focusing on some selective steps toward adaptation being taken by individuals that can afford them. There is an ongoing effort along the East Coast to rebuild after the destruction caused by Sandy – some of this effort is being pursued in a way that is designed to minimize future damage caused by such storms. I am naming such efforts adaptive rebuilding. It is a positive development that has the potential to be applied in various forms in poorer countries, while avoiding the polarizing class struggle the Hamptons are facing.

One of the most effective efforts toward bringing about adaptation is to create disincentives for people to live in areas prone to flooding (Zone A in the NYC lingo). I believe this technique should be globalized as widely as possible. A recent article by Tara Siegel Bernard (NYT-May 10, 2013) titled, “Rebuilding After Sandy, but With Costly New Rules,” summarized the post-Sandy situation. A new federal flood insurance law that was issued last year has resulted in a sharp rise in some premiums.

A specific example with numbers taken from this article demonstrates the new strategy:

The insurance premiums are determined, in part, by where your home stands relative to that base. The higher you go, of course, the less you pay. Consider a single-family home in a zone with a moderate to high risk of a flood, that has a flood policy with $250,000 of coverage: if the home is four feet below the base flood elevation, the homeowner would pay an annual premium of about $9,500, according to FEMA. But if the home was elevated to the base, the premium would cost $1,410. Hoist the home three feet higher, and the premium would drop to $427.

A recent map of New York City’s Hurricane evacuation zones is shown below: 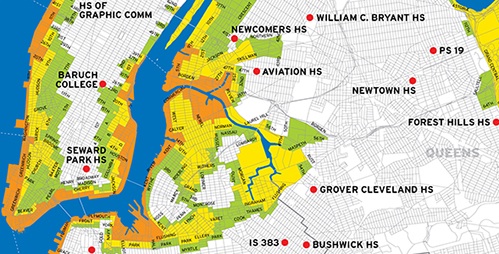 New York governor Andrew Cuomo also recently announced (NYT-Feb 4, 2013) that he wants to spend as much as $400 million (obtained from the federal recovery money) to buy and raze damaged homes in the flood plains of New York State, with the aim to convert them into parks, bird sanctuaries, dunes or open beaches.

There is no compulsion here, but it is a very strong encouragement to get out of the water. The population of New York City is more than 8 million people, while that of the metropolitan tri-state area is more than 20 million. As we can see from the map above, the government is trying to put into place economic incentives for many people to move away from the shore.

The motivations for these efforts are mainly economical: storms of Sandy’s magnitude cost a lot of money- both for individuals, and all forms of government. As the frequency of such storms increases, there is a growing reluctance to pay. The payment essentially amounts to a transfer of money from people who live in safe, higher ground areas, to those that like to live near the sea (or were forced to move there in the past when society was not aware of the dangers).

The direct damage to property is not the only issue. More than two years after the tsunami hit Japan, rubble from the storm continues to wash out to the West Coast of the United States and the coastal areas of many other countries. Heavily populated, flood-prone sea shores become rife with potential debris, while the oceans provide a transit system to spread the damage around.

Many of the available flood maps are old and out of date. Future predictions of flood zones are even more uncertain. It is one issue to devise policies to encourage large population shifts away from existing flood areas; trying to draw flood maps based on projections of future floods is completely different issue.

That said, incentives to move away from projected flood zones, combined with frequent updates of the areas included in these projections, are a good first step towards flexible adaptation- one that can and should be implemented globally to include as many people as possible.

Micha Tomkiewicz, Ph.D., is a professor of physics in the Department of Physics, Brooklyn College, the City University of New York. He is also a professor of physics and chemistry in the School for Graduate Studies of the City University of New York. In addition, he is the founding-director of the Environmental Studies Program at Brooklyn College as well as director of the Electrochemistry Institute at that same institution.
View all posts by climatechangefork →
This entry was posted in Climate Change and tagged Adaptation, Adaptive Rebuilding, Climate Change, Cuomo, Evacuation, Flood, Global Warming, Hurricane, Insurance, Keeling Curve, NYC, Sandy, Sea-Level Rise. Bookmark the permalink.