Erica Goode’s recent article in the New York Times (NYT – March 15, 2013), “Focusing on Violence Before It Happens,” describes a growing effort to identify and prevent major catastrophic events such as school violence. Two paragraphs from the article summarize the issue:

The young men had been brought to the attention of the School Threat Assessment Response Team program overseen by Dr. Beliz, one of the most intensive efforts in the nation to identify the potential for school violence and take steps to prevent it. The program, an unusual collaboration involving county mental health professionals, law enforcement agencies and schools, was developed by the Los Angeles Police Department in 2007, after the shooting rampage at Virginia Tech University, and was taken countywide in 2009 by Dr. Beliz, a deputy director of the mental health department.

In the national debate that has followed the killings at Sandy Hook Elementary School in Newtown, much of the focus has been on regulating firearms. But many law enforcement and mental health experts believe that developing comprehensive approaches to prevention is equally important. In many cases, they note, the perpetrators of such violence are troubled young people who have signaled their distress to others and who might have been stopped had they received appropriate help.

The government in the US is now starting to believe that by paying attention to warning signs, properly trained professionals can help prevent or mitigate disasters before they reach their catastrophic tipping points. The logical next step is to adopt the same preventative approach to the planetary tipping points that we predict will result from human caused (anthropogenic) climate change.

In a recent survey in Science magazine (Marten Scheffer et al. (11 co-authors) – Science – 19 October 2012, Vol 338, p. 344), Tipping Point was defined as a “Catastrophic Bifurcation,” a term which was taken from mathematical Chaos Theory, and has its own well developed definition. Bifurcation indicates a splitting into two branches; the “fork” in the title of both my book and this blog, refers to the same phenomenon. Tipping Points are predictable, an aspect that attracts a great deal of interest for obvious reasons. The financial markets have seen intense activity in this area (see James Owen Weatherall’s The Physics of Wall Street, Houghton Mifflin Harcourt, 2013), with attempts to predict upcoming financial bubbles. The main premise behind the ability to predict bifurcation is that one monitors the driving forces that tend to restore a system to its state of equilibrium. As the system approaches the tipping point, these restoring forces tend to decrease until they completely disappear.

An image can do wonders to illustrate a concept, and this one accurately depicts our collective reaction to climate change. 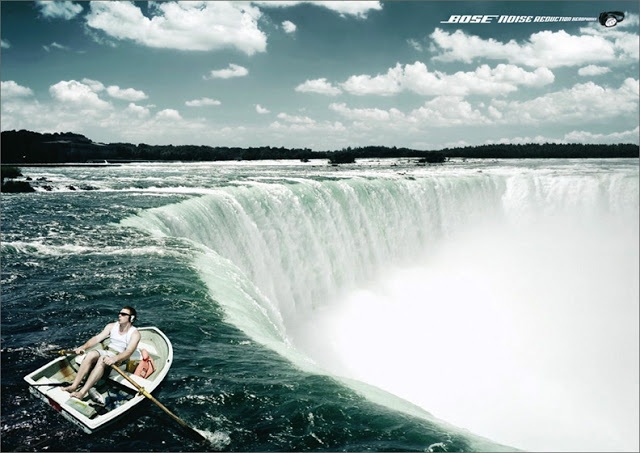 I found this image (through Google Image Search) on a blog that illustrates and analyzes various advertising concepts. This ad for Bose sound cancellation headphones asserts that they are powerful enough to prevent the guy from hearing the approaching waterfall (Bose strongly advises not trying their product in these settings).

We can anticipate a waterfall long before we reach it, due to the noise and the strong prevailing currents. In fact, we can usually detect the signs early enough to row toward shore and prevent the fall that would be inevitable were we to keep a steady course. If, however, we ignore the warnings, or are ignorant enough not to recognize them, we pay the price. This holds true for collectives as well as individuals.

For a physicist, projecting individuals’ destructive tipping points seems a much more imprecise exercise than doing so for the global tipping points of the physical environment. At least in the latter case, the projections are based on well-defined, if not always fully understood, mechanisms. But as a country, after seeing the immediate effects of violence on our youths, we are willing to take chances and make the effort to implement such assessments because even one clear success might be worth it. Applying the same spirit to planetary tipping points has the potential to save many, many more children in the long run.

Micha Tomkiewicz, Ph.D., is a professor of physics in the Department of Physics, Brooklyn College, the City University of New York. He is also a professor of physics and chemistry in the School for Graduate Studies of the City University of New York. In addition, he is the founding-director of the Environmental Studies Program at Brooklyn College as well as director of the Electrochemistry Institute at that same institution.
View all posts by climatechangefork →
This entry was posted in Climate Change, Education and tagged Climate Change, Climate Change Denial, Global Warming, Newtown, Science, Tipping Point, Violence, Warning, Waterfall. Bookmark the permalink.