Obstacles to Adaptation of Water Desalination

Posted on November 12, 2013 by climatechangefork

This blog will focus entirely on a report that was issued by the Pacific Institute in 2006 under the title “Desalination, with a Grain of Salt.” The report was authored by Heather Cooley, Peter H. Gleick and Garry Wolf. The report was funded by the California Coastal and Marine Initiative (CCMI) and private foundations (listed in the report). The three authors are known environmentalists who have the complementary set of skills necessary to evaluate the technology. Peter Gleick is a recipient of the prestigious MacArthur Foundation Fellowship, among other honors, for his work on water systems.

In late 2012 construction started on the largest water desalination plant in California near Carlsbad. The facility, which is designed to produce more than 50 million gallons/day of desalinated water, is projected to start operation in 2016. The planning for the facility lasted 12 years, with an additional 6 years spent in the permitting process. The Pacific Institute report was well within this 18 year time period. In spite of the authors’ environmental credentials, the bias in the report is clear from its title. According to an idiomatic dictionary, to “take something with a grain of salt” is to consider something to be not completely true or right, as in: I’ve read the article, which I take with a grain of salt. Related vocabulary: “hard to swallow.”

Selected recommendations from the report include:

1.      The cost of desalination has fallen in recent years, but it remains an expensive water-supply option. Desalination facilities are being proposed in locations where considerable cost-effective conservation and efficiency. Improvements are still possible.

The authors provide a cost comparison with the other alternatives, shown below: 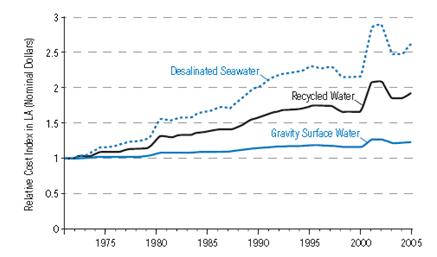 2.      More energy is required to produce water from desalination than from any other water-supply or demand-management option in California. The future cost of desalinated water will be more sensitive to changes in energy prices than will other sources of water.

3.      Public subsidies for desalination plants are inappropriate unless explicit public benefits are guaranteed.

4.     More research is needed to fill gaps in our understanding, but the technological state of desalination is sufficiently mature and commercial to require the private sector to bear most additional research costs.

5.      Reliability and Water-Quality Considerations:
Desalination plants offer both system-reliability and water-quality advantages, but other options may provide these advantages at lower cost.

6.       Desalination can produce high-quality water but may also introduce biological or chemical contaminants into our water supply.

7.      More energy is required to produce water from desalination than from any other water-supply or demand-management option in California.

8.      Desalination can produce water that is corrosive and damaging to water distribution systems.

1.      Desalination produces highly concentrated salt brines that may also contain other chemical pollutants. Safe disposal of this effluent is a challenge.

2.      Disposal of brine in underground aquifers should be prohibited unless comprehensive and competent groundwater surveys are done and there is no reasonable risk of brine plumes appearing in freshwater wells.

3.      Impingement and entrainment of marine organisms are among the most significant environmental threats associated with seawater desalination.

5.      Desalination may reduce the need to take additional water from the environment and, in some cases, offers the opportunity to return water to the environment.

1.      Desalination offers both advantages and disadvantages in the face of climatic extremes and human-induced climate changes. Desalination facilities may help reduce the dependence of local water agencies on climate sensitive sources of supply.

2.      Extensive development of desalination can lead to greater dependence on fossil fuels, an increase in greenhouse gas emissions, and a worsening of climate change.

3.      Coastal desalination facilities will be vulnerable to the effects of climate change, including rising sea levels, storm surges, and extreme weather events.

Siting and Operation of Desalination Plants

1.      Ocean desalination facilities, and the water they produce, will affect coastal development and land use.

2.      There are unresolved controversies over private ownership and operation of desalination facilities.

3.      Desalination offers both advantages and disadvantages in the face of climatic extremes and human-induced climate changes.

4.      Co-location of desalination facilities at existing power plants offers both economic and environmental advantages and disadvantages.

5.      Siting, building, and operation of desalination facilities are likely to be delayed or halted if local conditions and sentiments and the public interest are not adequately acknowledged and addressed.

6.      The regulatory and oversight process for desalination is sometimes unclear and contradictory.

It is obvious to me that there is an agenda that consistently threads through these recommendations. According to the report, water desalination, at least in California, should be the last resort. As the figure shows, the alternatives are recycled water and Gravity Surfaced Water. The reasoning can be considered practical. There is plenty of room for improvement both in terms of more rational use of fresh water (Gravity Surfaced Water) and wider usage of recycled water. What the recommendations do not take into account is the broad influence that California has in the global attempts at environmental adaptation. I will go into details in the next few blogs that will focus on water stress. More often than not, as California sets trends which the rest of the US later follows (with varying lag time), and any time the US does something, the World is watching.

Micha Tomkiewicz, Ph.D., is a professor of physics in the Department of Physics, Brooklyn College, the City University of New York. He is also a professor of physics and chemistry in the School for Graduate Studies of the City University of New York. In addition, he is the founding-director of the Environmental Studies Program at Brooklyn College as well as director of the Electrochemistry Institute at that same institution.
View all posts by climatechangefork →
This entry was posted in Climate Change and tagged CCMI, Clean Energy, Climate Change, Desalination, Energy, Pacific Institute, Peter H. Gleick, Water, Water Cycle, Water Scarcity, Water Stress. Bookmark the permalink.