Posted on November 5, 2013 by climatechangefork

My blogs from the last few months have focused on the global water stress we are suffering, and its relation to climate change. The last two blogs in this series (October 8 and 29) have centered on the efforts to address this crisis by adding desalinated water to supplement the natural fresh water supplies. Last Friday, I received an email from Mr. Michael Kirsch about earlier attempts to implement the usage of such technology on a much grander scale (at least in the US), that were contemplated by the Kennedy administration in the early 70s. I am delighted that Mr. Kirsch has agreed to let me post his email to me as a guest blog here.

As always, I welcome feedback to my blog – a large point of this endeavor is to communicate with the communities of people who are interested in climate change – some scientists, some not – and perhaps reach a few new ears. I am pleased to be part of this ongoing discussion, and am interested to know your opinions. (I really do pay attention to my email!)

The email is copied in full below:

I found your recent article on desalination very interesting and necessary for more people to consider.  I’d like to see more of where the discussion on this topic is going.

I am aware of successes in Israel. Also, that we are now finally building a 50 mgd (million gallons/day) capacity plant in the U.S., in Carlsbad, CA, to be completed in 2016, which sadly, will be the largest in the western hemisphere, and the first on the west coast. This 50 mgd site will constitute only 1/3 of Kennedy’s plan for a 150 mgd capacity plant, by 1970, 46 years earlier!

I wanted to know if you were aware of the John F. Kennedy administration’s study, “An Assessment of Large Nuclear Powered Sea Water Distillation Plants.” James Ramey testified in Congress about the results of the study on August 18, 1964. The results show that if Kennedy had not been assassinated, we would have been building large nuclear desalination plants by 1970, and just four of these plants, each with a capacity of 3 GW (3 billion Watts) of thermal energy, would have provided enough water for a city the size of Los Angeles. This report was the most ambitious to date and, I think still, marks a more logical standpoint from which to consider desalination, rather than the “cost-benefit” approach taken ever since.

Below is my summary of the results of that study, included in a recent article of mine (part of a larger report put out by my magazine). In the full article, report I have descriptions and a map of 43 proposed locations for nuclear desalination in the United States for municipal, agricultural waste water treatment, nitrate treatment, salt water intrusion problems, and saline river water in the west. 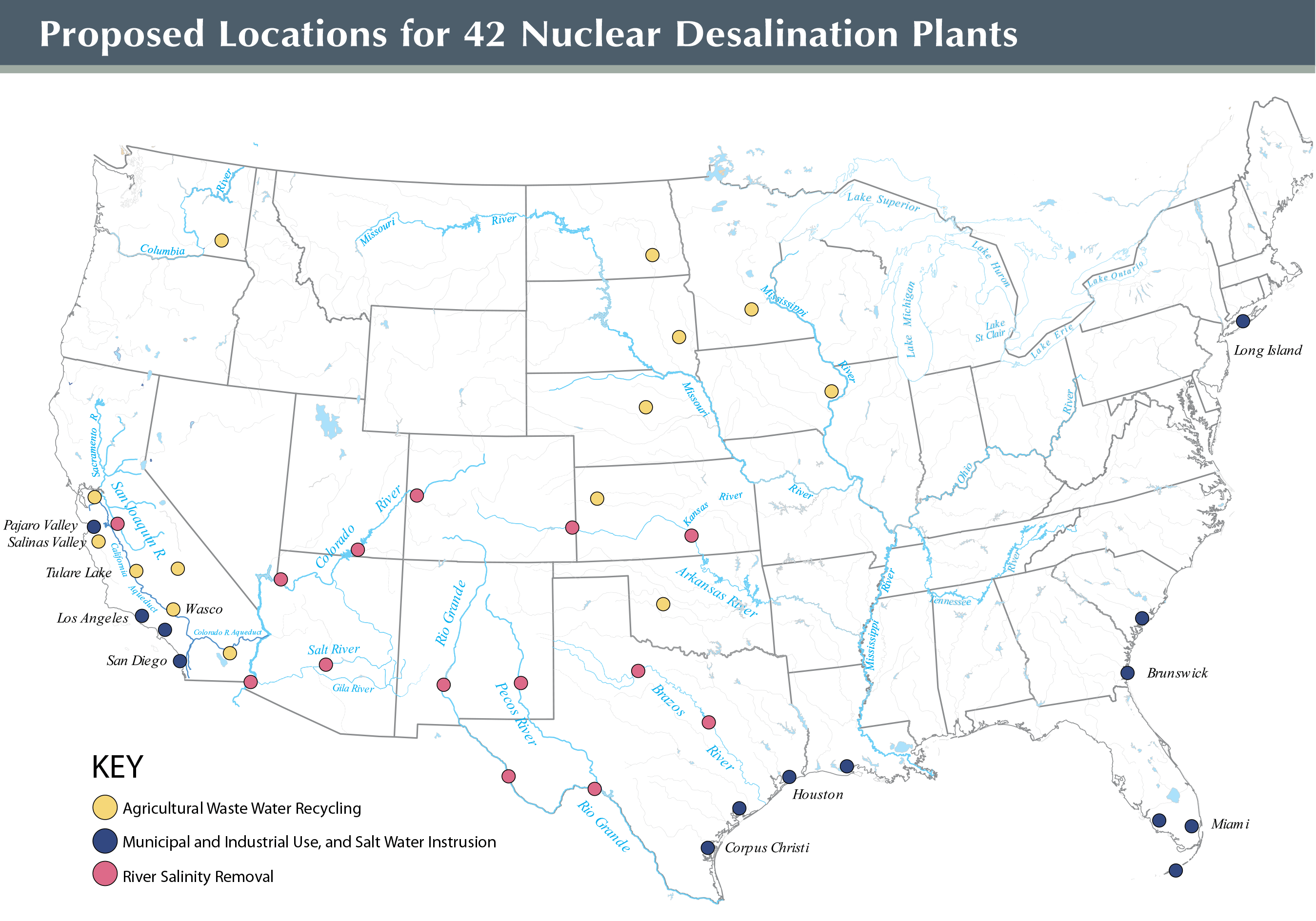 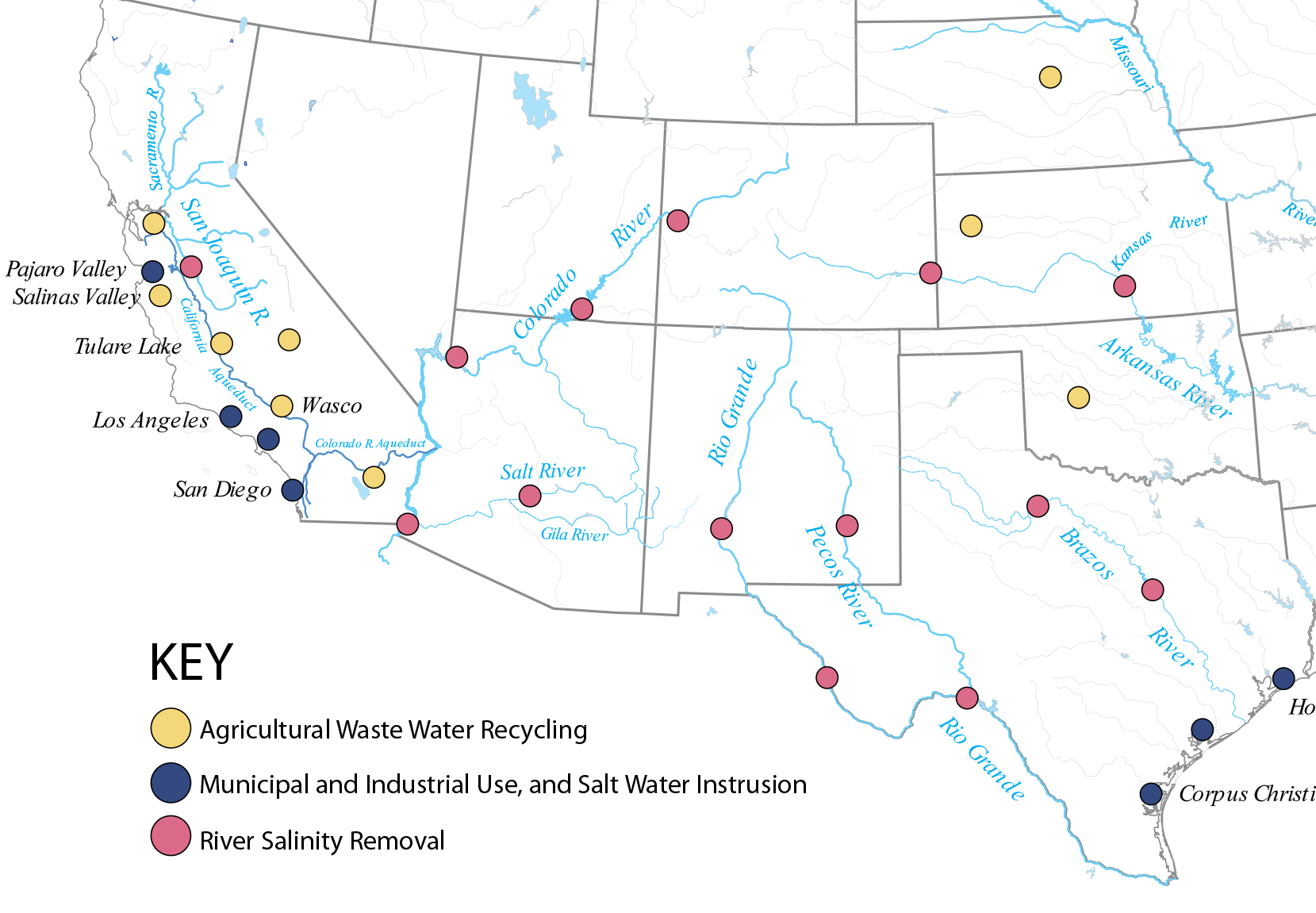 “In January 1963, Kennedy formed a task group with the Executive Office of Science and Technology to investigate the use of large nuclear reactors for desalination. Working closely with the Atomic Energy Commission (AEC) and the Department of Interior, the task group issued its report in March 1964, five months after his assassination. Their report estimated that if an appropriate research and development program were actively pursued, large-scale dual-purpose installations could produce 1,000 to 1,900 megawatts (MW) of electricity and 500 to 800 million gallons of water per day (0.6-0.9 million acre feet per year (MAFY)). The report also suggested a program to develop and demonstrate a plant operating with an 8,300-MWt reactor,  producing approximately 1,400 megawatts of electricity and 600 million gallons of water per day (0.7 MAFY).

“The task group proposed producing a half dozen intermediate sized units, two in southern California, one in the greater New York area, several for the Gulf Coast, and one in Florida.

“The Metropolitan Water District (MWD) of southern California was the first site for such nuclear desalination, and entered into a contract with the Department of the Interior and the AEC in 1964 for a detailed economic and engineering study of dual-purpose nuclear desalination plants with 50 to 150 million gallons per day (mgd) production capacity, to be in operation by 1970. (For scale, a desalination plant producing 150 mgd, would provide two times the current water use of San Francisco. Four of these plants, or one 8,300 MWt plant, would provide the current water use of Los Angeles.)

“James Ramsey of the AEC remarked, ‘Such a project could convert more water from the sea than all the other sea water conversion units currently operating in the world.’ The 150 mgd plant was to produce enough water for a city of about 750,000 with a power output of 1.8 GW, exceeding that of the Hoover Dam, or enough for a city of about 2 million. Two large conventional light-water nuclear reactors, of about 3000 thermal megawatts each, were to be the energy source, and the water plant was to consist of three large multistage flash distillation sections, each producing 50 million gallons of water per day. The plant would have been 30 times larger than the largest existing water-desalination plant at that time.

“Other plans were underway for Texas, Arizona, New York, and Florida. For example, in July, 1964, Glen Seaborg, chairman of the AEC, proposed dual-purpose plant for Key West, FL, of intermediate size, up to 1.5 GWt producing 150 mgd.

“In a 1966 AEC report, an even larger reactor was illustrated in a drawing, showing a nuclear-powered seawater- conversion plant that would produce 1 billion gallons of fresh water per day and 4.5 GW of power. The report continued, suggesting that “by the 1980s, plants embodying several nuclear reactors in a single installation, with a total capacity as high as 25,000 thermal megawatts, could be in operation. A plant like this would produce 5,950 electrical megawatts at 1.6 mills per kilowatt-hour and 1,300 mgd at 19¢ per thousand gallons.”

“Today, in the short term, the “interim sized” 150 mgd desalination plants of the Kennedy era should immediately be built. Coastal desalination for industrial and municipal use will provide for cities, offset demands on limited water for agriculture, and solve the problem of saltwater intrusion. Agricultural wastewater desalination combined with groundwater desalination will increase crop yields, and reclaim land abandoned due to high salinity levels and lack of water. Saline river water, a major problem in nearly every western river, can be treated.”

Michael Kirsch is an economics and science researcher and writer, and works for the LaRouche Policy Institute and for 21st Century Science and Technology Science Magazine.  He is the author of several in-depth reports including three on the North American Water and Power Alliance XXI, a continental water and power management system, updated from its original 1964 design by Kirsch and his collaborators, for the twenty-first century.

He is an expert on Alexander Hamilton’s unique American Credit System and its various applications under the administrations of John Quincy Adams, Abraham Lincoln, Franklin Delano Roosevelt, and John F. Kennedy.

Micha Tomkiewicz, Ph.D., is a professor of physics in the Department of Physics, Brooklyn College, the City University of New York. He is also a professor of physics and chemistry in the School for Graduate Studies of the City University of New York. In addition, he is the founding-director of the Environmental Studies Program at Brooklyn College as well as director of the Electrochemistry Institute at that same institution.
View all posts by climatechangefork →
This entry was posted in Climate Change and tagged Adaptation, Clean Energy, Climate Change, Desalination, Distilation, Energy, Environment, Guest Blog, JFK, Michael Kirsch, Nuclear, Power, Power Plants, Science, Sustainability, Technology, Water, Water Cycle, Water Stress. Bookmark the permalink.