Posted on December 30, 2014 by climatechangefork

As I have mentioned before, electric utilities must necessarily store electricity in order to keep up with the fluctuations in consumer demands (July 29 – August 12 blogs). For example, all around the world (where people are connected to electrical grids) people use considerably less electricity in the middle of the night compared with that used at dinner time. The process is known as load leveling; it is essential when the generation of electricity is steady but consumption is not. There is an increasing need for such a process when the generation of electricity is intermittent – as is the case with solar energy use in forms such as photovoltaics (solar cells) and wind. The enhanced need for storage in the use of such intermittent sources was the trigger for the contentious series of blogs in November that followed John Morgan’s guest blog on EROI. I came to know John Morgan through an exchanged series of tweets (August 8, 2014 blog) about David MacKay’s article on the “ultimate” need for storage in a virtual, fully sustainable, England. Here is what I wrote in that short blog:

Thank you Dadiva for directing my attention to this important article. It is a significant quantitative contribution to the requirements necessary for a global energy transition to decarbonized energy sources based on solar energy conversion in all its forms. It makes the key point that although globally there is plenty of energy coming in, locally there are imbalances that require separating energy production from consumption. The emphasis in the paper is on sovereign states (with Britain as a focal point), but in-state disparities – especially between dense populations of urban consumers and equally dense rural production areas – require extensive investments in storage and smart grids capable of covering a large area.

MacKay’s emphasis was on global need, but he used his native England as a virtual case in point. Meanwhile, Germany is probably the best example of what shape such a transition will take: it’s a large (population 80 million), rich, developed country that has taken a top-down approach, and its decision to move the energy transition full speed ahead has met with support from most of the population. The issue of the storage requirements in the transition is under active discussion. The head of Agora Energiewende, a German think tank focusing on the German energy transition gave his position:

Below are some significant parts of Paul Hockenos’ article in Renewable Energy World that summarizes the debate and Agora’s thoughts on this issue:

… this autumn, one of Germany’s leading energy think tanks, Agora Energiewende (financed by the Stiftung Mercator and the European Climate Foundation), dropped a small bombshell on the Energiewende community. In a study carried out by Agora and other high-profile, independent research institutes, it concluded that significant storage capacity for renewably generated electricity would not be needed for another 20 years — until Germany has at least a 60 percent share of renewables in its power sector. The study is a hot potato that has, so far, incurred considerable critique from peer institutes and lobby groups.

‘The key insight here,’ explains one of the authors, Daniel Fürstenwerth of Agora Energiewende, ‘is that the Energiewende can continue investing massively in renewable power right now. We will need to invest in power-to-power storage capacity in the long term, but not today. We have to keep the Energiewende cost-efficient or the German people, industry, and the political establishment won’t go for it.’

The essence of Agora’s argument is that Germany’s energy system can maintain the flexibility it needs even as renewables expand by other, less costly means than new power-based storage technology. These alternative options include demand-side management, flexible conventional power plants, and grid expansion both in Germany and across its borders.

Demand management is an idea central to the work of Agora Energiewende, a young think tank that burst onto the scene in Germany two years ago. ‘It’s about making the electricity demand flexible so that it meshes better with a fluctuating power supply,’ explains its website, as well as ‘making the power system as a whole more flexible in order to ensure security of supply.’ Agora’s analysts argue that energy demand management can be spurred by market incentives, regulatory guidelines and new technology that will reduce investment costs in the Energiewende and help ensure supply security.

Load control, load shifting, energy efficiency and conservation, for example, are all ways to manage demand. One Agora study shows that Germany’s industrial producers can shift more than a gigawatt of their power demand for short periods, a phenomenon that on a larger scale could go a long way to ensure security of the regional power supply. Pilot projects in Bavaria and Baden Wurttemberg have already brought encouraging results.

Moreover, inflexible conventional power plants like Combined Heat and Power (CHP) plants can be made more flexible by adding hot water towers. In Germany today there are already CHP plants in places like the German cities of Flensburg and Nuremburg that turn surplus power into hot water, opening the way for renewables to provide supply when the weather dictates. ‘It’s a relatively cheap solution,’ says Fürstenwerth.

The other cornerstone of Agora’s argument is that Germany’s current grid and the expansions underway — an additional 2,650 kilometers of new high-voltage grid is currently being laid — will provide the flexibility necessary to accommodate more renewables. Agora assumes that grid construction will proceed as planned — in Germany as well as in neighbor countries — which will better enable grid operators to match supply and demand. And the better Germany is linked to its neighbors, the more it can balance by trading on the European market.

The people at Angora emphasize flexibility – different sustainable sources have corresponding intermittency periods, but if they can match certain ones with peak usage times, they can partially stabilize the energy supply and thus decrease the need for storage.

As the following figure shows, wind power and solar cell power in Germany correlate negatively throughout the year: 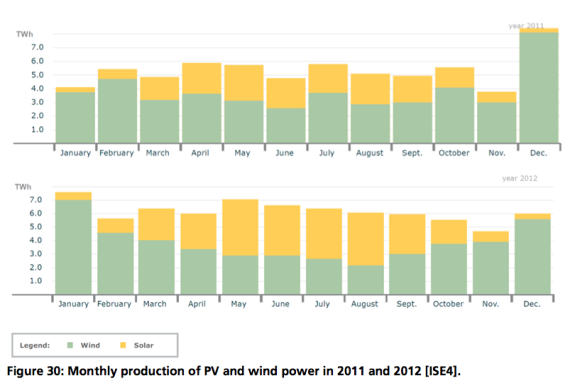 As we will discuss when we look at the energy transitions of other countries, such combinations of sustainable sources with different intermittency are now starting to permeate globally, becoming an important element in the global transition.