Posted on December 23, 2014 by climatechangefork

As I discussed in the in the last blog, the feed-in tariff that was introduced as a key element in the German energy transition has resulted in the Germans paying among the highest electricity rates in the world. It was designed to basically subsidize the producers of the new alternative energy.  The graph below shows the results: 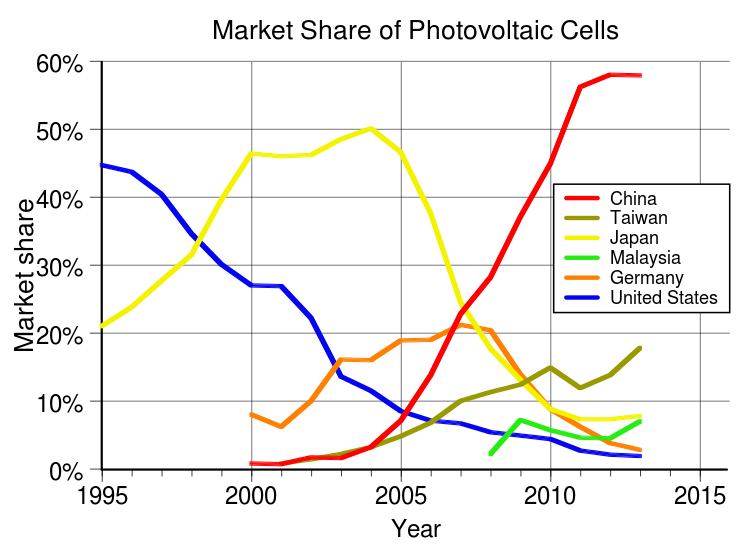 This shift to total domination of Chinese solar manufacturing over almost everybody else was due to the Chinese ability to drastically reduce their prices of the cells. This is shown in Figure 2: 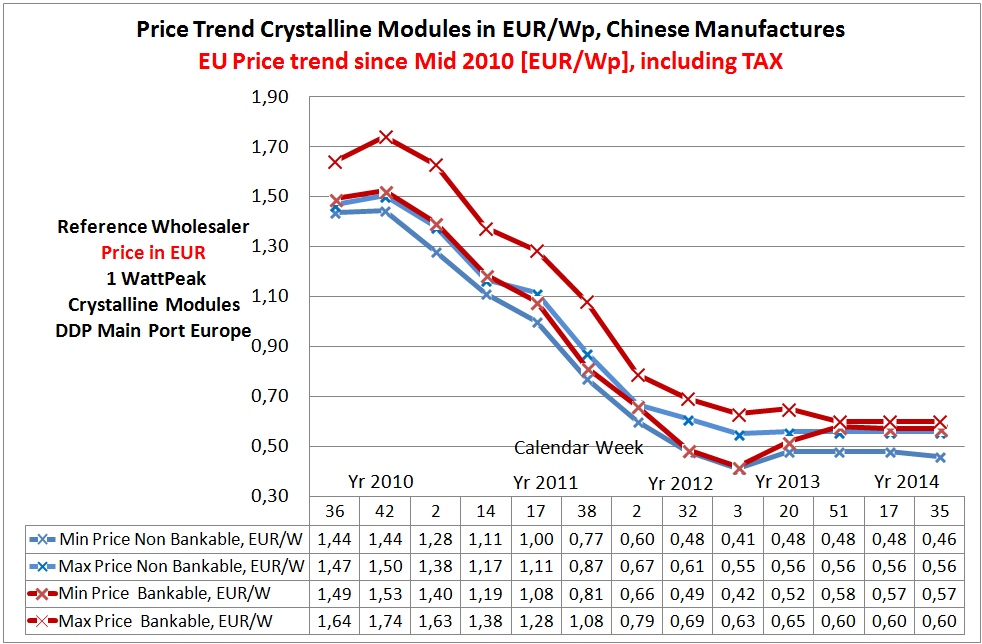 Figure 2 – Prices of Crystalline Modules of Chinese Made Photovoltaic Systems

With wind, the situation is a bit better: 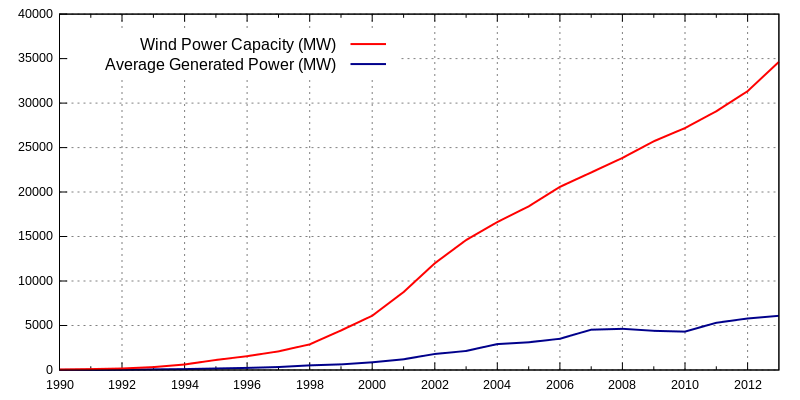 Not surprisingly, the emerging dominance of Chinese photovoltaic cells has caused major stress in the manufacturing of solar cells in the rest of the world, including Germany. But is this good, bad or irrelevant for the world as a whole? In terms of global energy transition, it has to be good. The plunge in prices makes the holy grail of bringing down the cost of nonpolluting energy alternatives an ever more reachable reality. The claim that the switch to alternatives generates jobs may be true globally but it becomes questionable on a local scale. As I have written before, the local scale, in the form of sovereign countries, makes the rules. Both the US and the European Union are currently fighting the Chinese dominance claiming that the Chinese government is subsidizing the export of solar panels, an act forbidden by the rules of WTO (World Trade Organization). In addition, there are strong indications that many Chinese manufactures are selling the panels below cost. This is always a controversial issue in trade between developed and developing countries in which the components of the cost structure differ mainly because of differential labor costs. The sharp cost decline was a major factor in the bankruptcy of many American and European manufacturers – perhaps the most famous one (at least on this side of the Atlantic) was the bankruptcy of the American manufacturer Solyndra, which defaulted on a half billion dollar loan secured by the American government. Recently, the plunging prices have started to affect Chinese firms as well, mainly because of rising labor costs in China. This is shifting some of the production to other developing countries such as Malaysia (see Figure 1 for the recent stabilization of market share of China coupled with the rise in the Malaysian share). Individual countries have tools to fight such trends. As of 2012, the US has imposed stiff duties of about 30% on Chinese imports of solar panels, while the European Union imposed a quota for import of the panels. The US is expected to broaden the impact of the duties. These combined actions will most likely result in the stabilization of the prices, possibly even reversing the decline. Even within the European Union there are strong voices that claim that the German policy of high feed-in tariff amounts to an illegal subsidy of German producers. Here is what the Financial Times writes about the issue:

Joaquín Almunia, the EU competition chief, contradicted Mr Gabriel’s claim that one outstanding issue – forcing Germany to treat imported energy on the same terms as domestic producers – was never before raised in six months of talks. In a statement issued on Thursday, Mr Almunia argued the discrimination was potentially illegal, a risk that had been “made clear to the German authorities back in December 2013”. ‘There is nothing new in the need to address possible discrimination of imported electricity by Germany,’ he said. ‘If consumers have to pay a surcharge on their consumption of both domestic and imported electricity but revenue from the surcharge is used to only finance domestic electricity producers, there is a risk that imported electricity is disadvantaged and made comparatively more expensive.’

There is no question in my mind that the rules for international trade in alternative energy sources will, at some point, emerge as an important issue to be discussed as part of the global mitigation policy for climate change. Hopefully, this will lead to establishing more effective rules of trade that can facilitate a global energy transition in a timely way. The next blog will be focused on the necessity for storage infrastructure in Germany and thus will be directly connected to the November discussions about the role of storage in the EROI considerations in the transition.