2014 – Flat Carbon Emissions Rate With a 3% GDP Increase: One Year is Not a Trend Maker But Can be an Attractive Candidate for a Reference.

Posted on March 25, 2015 by climatechangefork

Dear Readers: We apologize for the delay in this week’s post. We were experiencing technical difficulties with the website, but are now back up and running thanks to Brooklyn College’s excellent support staff.

Recently, a number of publications came out with great news: in the last year, global energy-related greenhouse gas emissions remained steady, even as global economic activity grew at a rate of 3%. The numbers come from a recent IEA (International Energy Agency) report:

Data from the International Energy Agency (IEA) indicate that global emissions of carbon dioxide from the energy sector stalled in 2014, marking the first time in 40 years in which there was a halt or reduction in emissions of the greenhouse gas that was not tied to an economic downturn.

“This gives me even more hope that humankind will be able to work together to combat climate change, the most important threat facing us today,” said IEA Chief Economist Fatih Birol, recently named to take over from Maria van der Hoeven as the next IEA Executive Director.

Global emissions of carbon dioxide stood at 32.3 billion tonnes in 2014, unchanged from the preceding year. The preliminary IEA data suggest that efforts to mitigate climate change may be having a more pronounced effect on emissions than had previously been thought.

The IEA attributes the halt in emissions growth to changing patterns of energy consumption in China and OECD countries. In China, 2014 saw greater generation of electricity from renewable sources, such as hydropower, solar and wind, and less burning of coal. In OECD economies, recent efforts to promote more sustainable growth – including greater energy efficiency and more renewable energy – are producing the desired effect of decoupling economic growth from greenhouse gas emissions.

“This is both a very welcome surprise and a significant one,” added Birol. “It provides much-needed momentum to negotiators preparing to forge a global climate deal in Paris in December: for the first time, greenhouse gas emissions are decoupling from economic growth.”

In the 40 years in which the IEA has been collecting data on carbon dioxide emissions, there have only been three times in which emissions have stood still or fallen compared to the previous year, and all were associated with global economic weakness: the early 1980’s; 1992 and 2009. In 2014, however, the global economy expanded by 3%.

More details on the data and analysis will be included in an IEA special report on energy and climate that will be released on 15 June in London. The report will provide decision-makers with analysis of national climate pledges in the context of the recent downturn in fossil fuel prices, suggest pragmatic policy measures to advance climate goals without blunting economic growth, and assess adaptation needs, including in the power sectors of China and India.

“The latest data on emissions are indeed encouraging, but this is no time for complacency – and certainly not the time to use this positive news as an excuse to stall further action,” said IEA Executive Director Maria van der Hoeven.

To put the achievement into context, let’s go back to the IPAT identity that I originally introduced in November 2012, which I have also referred to recently with regards to the energy policy in India (Feb. 24, 2015 blog):

Indeed, as the IEA mentioned, this is the first time in 40 years that a halt or reduction in emission of greenhouse gases was not tied to an economic downturn (the affluence term in the identity).

However, almost immediately after the IEA announcement, many voices pointed out that “one year is not a trend setter.” In this case, the skeptics are absolutely right. That said, it is great that this one example came out before the scheduled United Nations Climate Change Conference (COP21) convenes to (finally) draft a global agreement on mitigation. This marks a great global reference point; the “only” thing that we have to do is to continue the trend and draft it into an agreement. Since this phenomenon has already happened, it can no longer be said to be impossible, a fact that the new head of the IEA highlights in the announcement. To make it a trend we need an agreement that all countries will be committed to following; not just an accidental development.

Table 1 below summarizes the efforts of the 10 largest CO2 emitters, based on the latest findings of the 2014 Climate Change Performance Index (CCPI), compiled annually by the German organization Germanwatch. These 10 countries are responsible for 2/3 of all global emissions. The table shows their global share of the four factors that appear in the IPAT identity, with the resulting global share of the emission. 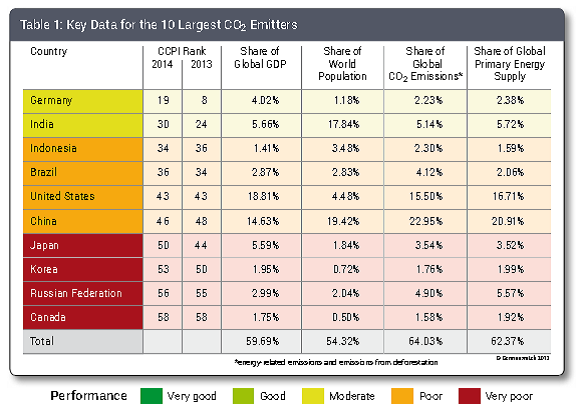 The CCPI ranking in the table above shows the 2013 and 2014 Climate Change Performance Indexes that Germanwatch compiled for these countries.

The report then uses Poland (not one of the 10 largest contributors, but still among the worst in the EU) to illustrate the criteria for the ranking. These numbers reflect the CCPI’s new methodology (restructured after 7 years of operation), which includes weighting of the individual indicators with a much stronger focus on renewable energy and efficiency as the most prominent mitigation strategies.

As these tables show us, the 10 largest emitters are not doing very well in terms of improvement. Only Germany and India, both of which we have examined here in previous series of blogs, rank as moderate with regards to progress. The rest are marked poor and very poor. In order to be able to convert the global 2014 flat emission rates from an incidental event to a trend, the 2015 Paris meeting will have to result in commitments dedicated to significant improvements in all of these countries. Let’s hope that can happen.

Micha Tomkiewicz, Ph.D., is a professor of physics in the Department of Physics, Brooklyn College, the City University of New York. He is also a professor of physics and chemistry in the School for Graduate Studies of the City University of New York. In addition, he is the founding-director of the Environmental Studies Program at Brooklyn College as well as director of the Electrochemistry Institute at that same institution.
View all posts by climatechangefork →
This entry was posted in Climate Change and tagged Adaptation, Carbon Dioxide Emissions, Carbon Footprint, CCPI, China, Clean Energy, Climate Change, CO2 emissions, Economics, Efficiency, Electricity, Emissions, Energy, Energy Consumption, Environment, Fossil Fuels, GDP, IEA, India, IPAT, OECD, Paris 2015, Physics, Poland, Policy, Population, Renewable Energy Act, Science, Sustainability, World Population. Bookmark the permalink.

6 Responses to 2014 – Flat Carbon Emissions Rate With a 3% GDP Increase: One Year is Not a Trend Maker But Can be an Attractive Candidate for a Reference.