On the Way to Paris

Posted on November 3, 2015 by climatechangefork

The UNFCCC (the United Nations Framework Convention on Climate Change) is the international climate policy venue that was negotiated at the Earth Summit in Rio-de-Janeiro in 1992. Its mandate is to “stabilize greenhouse gas concentrations in the atmosphere at a level that would prevent dangerous anthropogenic interference with the climate system”.[3] Of the 17 goals that the United Nations recently announced (see October 6 blog), the mitigation and adaptation of anthropogenic climate change was #13. It was the only one of the goals whose administration and enforcement was entrusted to a specified organization – the IPCC. The upcoming Paris conference is the 21st Conference of Parties (COP) assembled to try to accomplish the IPCC’s mission. The two most noteworthy COP conferences in the past were COP3 (held in 1997 in Kyoto, Japan), where the Kyoto Protocol was formed and signed, and COP15 (held in Copenhagen, Denmark, in 2009). Each of these brought with it a similar air of expectation to that which the Paris meeting is arousing. Many hope that COP21 will extend or replace the now expired Kyoto protocol. I will try to follow the Paris meeting throughout the rest of the year (but I expect the usual interruptions from pressing current events).

The much anticipated Paris IPCC meeting is expected to ask the nations of the world to commit in advance to taking certain actions to stabilize their greenhouse gas contributions. Today I will quote the commitments of the 10 most polluting nations; next week I will go more into depth about some reactions to these statements. 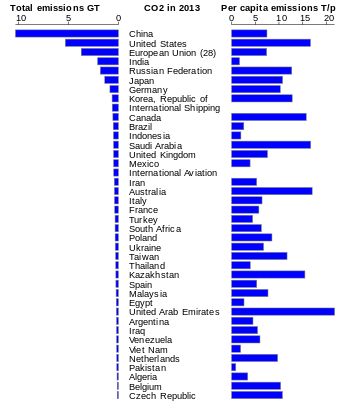 The commitments of the most polluting countries as given to the UNFCCC are shown below:

China communicated that it will endeavour to lower its CO2 emissions per unit of GDP by 40-45 per cent by 2020 compared with the 2005 level. It also expressed the intention to increase the share of non-fossil fuels in primary energy consumption to around 15 per cent by 2020 and to increase forest coverage by 40 million ha and forest stock volume by 1.3 billion m3 by 2020 compared with the 2005 levels.

China stated that the above-mentioned autonomous domestic mitigation actions are voluntary in nature and that they will be implemented in accordance with the principles and provisions of the Convention, in particular Article 4, paragraph 7. The Party also stated that its communication is made in accordance with the provisions of Article 12, paragraphs 1(b) and 4, and Article 10, paragraph 2(a), of the Convention.

The United States communicated a target in the range of a 17 per cent emission reduction by 2020 compared with 2005 levels, in conformity with anticipated United States energy and climate legislation, recognizing that the final target will be reported to the secretariat in the light of the enacted legislation. In addition, the pathway set forth in pending legislation would entail a 30 per cent emission reduction by 2025 and a 42 per cent emission reduction by 2030, in line with the goal to reduce emissions by 83 per cent by 2050. The submission of the target by the United States was made on the assumption that other Annex I Parties, as well as more advanced non-Annex I Parties, would, by 31 January 2010, associate with the Copenhagen Accord and submit mitigation actions for compilation into an information document in accordance with paragraph 4 or 5 of the Accord, as the case may be.

India communicated that it will endeavour to reduce the emissions intensity of its GDP by 20-25 per cent by 2020 compared with the 2005 level. It added that emissions from the agriculture sector would not form part of the assessment of its emissions intensity.

India stated that the proposed domestic actions are voluntary in nature and will not have a legally binding character. It added that these actions will be implemented in accordance with the provisions of relevant national legislation and policies, as well as the principles and provisions of the Convention, in particular Article 4, paragraph 7. Finally, it added that this information has been communicated in accordance with the provisions of Article 12, paragraphs 1(b) and 4, and Article 10, paragraph 2(a), of the Convention.

The EU and its 27 member States wished to reconfirm their commitment to a negotiating process aimed at achieving the strategic objective of limiting the increase in global average temperature to below 2 C above pre-industrial levels. Meeting that objective requires the level of global GHG emissions to peak by 2020 at the latest, to be reduced by at least 50 per cent compared with 1990 levels by 2050 and to continue to decline thereafter. To this end, and in accordance with the findings of the FCCC/SB/2011/INF.1/Rev.1

(a) Appropriate accounting of the potential of Russia’s forestry sector in the context of its contribution to meeting the obligations of anthropogenic emission reductions;

(b) The undertaking by all major emitters of the legally binding obligations to reduce anthropogenic GHG emissions. * **

* The Russian Federation communicated to the secretariat information on its quantified economy-wide emission reduction target in Russian, which can be found on the UNFCCC website. It also provided an unofficial translation of its submission in English and an edited version of this translation is included in this document.

Brazil communicated that it anticipates its mitigation actions, listed below, to lead to an expected emissions reduction of between 36.1 per cent and 38.9 per cent below its projected emissions in 2020:

(a) A reduction in deforestation in the Amazon (range of estimated reduction: 564 Mt carbon dioxide equivalent (CO2 eq) in 2020);

(i) An increase in energy supply from hydroelectric power plants (range of estimated reduction: 79 to 99 Mt CO2 eq in 2020);

(k) Iron and steel – replacing coal from deforestation with coal from planted forests (range of estimated reduction: 8 to 10 Mt CO2 eq in 2020).

Brazil stated that the envisaged domestic actions as indicated above are voluntary in nature and that they will be implemented in accordance with the principles and provisions of the Convention, particularly Article 4, paragraphs 1 and 7, Article 10, paragraph 2(a), and Article 12, paragraphs l(b) and 4. It also stated that the use of the clean development mechanism (CDM) established under the Kyoto Protocol would not be excluded.

Brazil also stated that it understands the Copenhagen Accord to be an important step in facilitating the conclusion of the on-going two-track negotiations under the AWG-KP and the AWG-LCA with a view to adopting a decision on the second commitment period of the Kyoto Protocol and also on the fulfilment of the Bali Action Plan during COP 16/CMP 6.

* Japan initially communicated a target of a 25 per cent emission reduction by 2020 compared with 1990 levels. The original communication is available here.

Indonesia communicated that its voluntary NAMAs will reduce its GHG emissions by 26 per cent by 2020.

Indonesia added that this reduction would be achieved through, inter alia:

(b) A reduction in the rate of deforestation and land degradation;

(c) The development of carbon sequestration projects in forestry and agriculture;

(d) The promotion of energy efficiency;

(e) The development of alternative and renewable energy sources;

(f) A reduction in solid and liquid waste;

Indonesia also communicated that its national action plan, aimed at achieving the aforementioned emissions reduction, would be equipped with a measurable, reportable and verifiable system in order to ensure that each action receives the necessary level of funding.

The Republic of Korea communicated that it aims to reduce its national GHG emissions by 30 per cent from the ‘business as usual’ emissions in 2020.

Canada communicated a target of a 17 per cent emission reduction by 2020 compared with 2005 levels, to be aligned with the final economy-wide emission reduction target of the United States of America in enacted legislation. Submission of this target was made with the expectation that other Annex I Parties and major Parties not included in Annex I to the Convention (non-Annex I Parties) would submit information on their emission targets and mitigation actions by 31 January 2010, pursuant to paragraphs 4 and 5 of the Copenhagen Accord.

Next week I will analyze these commitments in terms of their perceived impact on the mitigation of humanity’s future global contributions to global climate change.

Micha Tomkiewicz, Ph.D., is a professor of physics in the Department of Physics, Brooklyn College, the City University of New York. He is also a professor of physics and chemistry in the School for Graduate Studies of the City University of New York. In addition, he is the founding-director of the Environmental Studies Program at Brooklyn College as well as director of the Electrochemistry Institute at that same institution.
View all posts by climatechangefork →
This entry was posted in Climate Change and tagged Adaptation, Anthropogenic, Brazil, Canada, China, Clean Energy, Climate Change, CO2, CO2 emissions, Conference, COP21, Earth Summit, Electricity, Emissions, emitter, Energy, Environment, EU, Fossil Fuels, Global Warming, greenhouse gas, India, Indonesia, IPCC, Japan, Korea, Kyoto Protocol, Mitigation, Paris, Pollution, Russia, Sustainability, UN, UNFCCC, US, World Population. Bookmark the permalink.