A Voice From the Inside of a Feeding Transition

Posted on October 15, 2012 by climatechangefork

In the last few blogs (September 24 – October 8), I have tried to make the case that we can aim for a reasonable global strategy based on the IPCC SRES B1 scenario.  This calls for limiting anthropogenic changes to the chemistry of the atmosphere to a degree that is manageable through adaptation. The B1 scenario is based on two fundamental anchors, both reliant on a timeline which culminates toward the end of the century: limiting and stabilizing the global population to below 10 billion people and a major transitioning of global energy toward reliance on non-fossil fuel sources, such that more than half of all global energy comes from alternative sources (up from the present 15%). I and many others, have labeled this sort of major shift in energy supply over such a short time, a “feeding transition.” Obviously, both transitions have major consequences. In our limiting and stuttering ways we are in both transitions now and many of the consequences are already visible.

October 2011 marked a milestone, as the global population passed the 7 billion mark. Science magazine used this landmark as an opportunity to publish a full issue dedicated to present trends in global population (Science 333, 29 July 2011). Figures 1 and 2, posted below from the Science issue, are based on data from the UN Population Division. 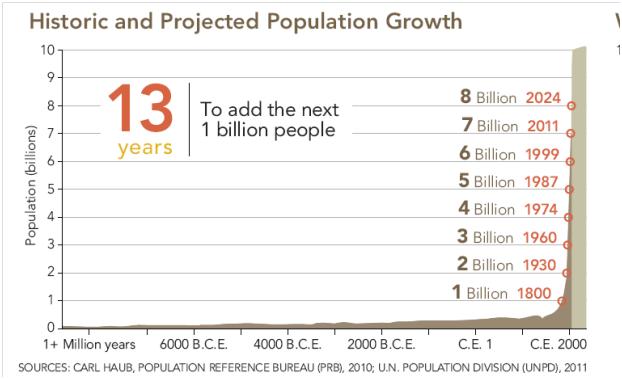 Figure 2 shows the more recent trends in global fertility rates, as defined by the average number of children that would be born to a woman during her lifetime. The fertility rate is the ultimate driving force for population growth, with a replacement rate taken as a number between 2 and 2.5 depending on factors such as infant mortality rate. One can see a major decrease in fertility rates after 1975. In most developed countries the total fertility rate is now well below replacement and the population is decreasing. The fertility rate in developing countries is still well above replacement but it is fast declining. This trend underlines the B1 scenario for a global population projected to stabilize below 10 billion toward the end of the century. This trend has also major consequences that we are presently experiencing, some of which I will try to explore in a future blog.

The part of the B1 scenario that deals with energy use is a more complicated situation. Globally, we have started to pay attention to the ways that the use of fossil fuels exert stress on the chemistry of the atmosphere. In the Rio convention (June 1992), the framework was established in an attempt to construct a global energy system that would reduce the carbon footprints while at the same time not limiting economic growth. The UN Framework Convention on Climate Change (UNFCCC) was created to form a global framework for collective action. On February 16, 2005, upon ratification by a set of countries collectively responsible for 55% of the greenhouse gases (GHG), the Kyoto Protocol came into force. Participating parties from developed countries were committed to reducing their combined GHG emissions by at least 5% from the 1990 level by the period of 2008 – 2012 and were to show significant progress in achieving that goal by 2005. The most notable exception to this ratification was the United States, which decided after the 2000 elections, not to be a part of the protocol. In contrast, the European Union was perhaps the most fervent supporter of the agreement, implementing Cap and Trade policies that shifted the cost balance between fossil fuels and alternative energy sources.

Figure 3 shows the results, as compiled from the International Energy Administration Data (EAD). From 2000 to 2009 both the European Union and the US follow similar patterns of carbon emission, while China’s emissions more than double. Looking back at the original data from the Kyoto baseline of 1990  shows that the European Union is approximately fulfilling its Kyoto commitments while the US (no commitments) slightly increases its emissions (by about 10%). 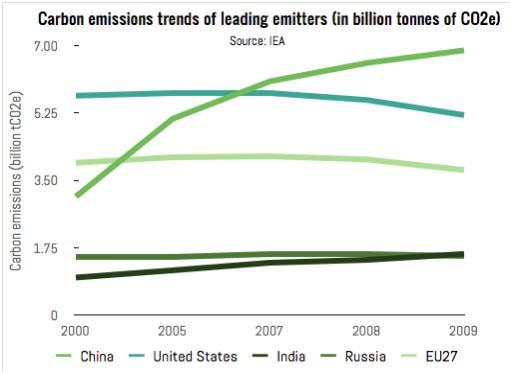 The emission comparison between the United States and the European Union seems to suggest that changes in government policies, as to use of energy sources, have very little impact, while economic activities certainly have an impact (two recessions over the last decade). The largest influence on the US, however, was a major shift in the primary energy source that drives electricity production.

Figure 4 again shows (October 8) the fuel type of electricity generation capacity by initial year of the operation of the power stations. Since 1990, and especially following the year 2000, the United States has experienced a major energy transition in the form of a shift from coal-based production to natural gas, with significant contribution from wind-fueled energy. While policy had something to do with this shift (primarily with regard to wind production), the main contributors were the market forces of price and technology. Natural gas is a fossil fuel – so it doesn’t bring us closer to the B1 energy transition, but it is the most efficient fossil fuel in terms of delivering energy for a constant carbon dioxide emission.

Figures 3 and 4 show that over the last 10 years we have experienced three major driving forces for energy use. Europe was driven by the Kyoto protocol, and China was driven by the apparent necessity to supply their fast economic growth with locally available, cost effective primary energy (coal). While the United States’ driving force was very similar to that of China, technological innovation uncovered the availability and cost effectiveness of natural gas as a much more efficient alternative to coal. The resulting energy usage happens to follow in the spirit of the Kyoto Protocol, even without having adjusted policies to accomplish this objective. Realization of the B1 scenario requires a global energy shift. If we are aiming for a similar outcome, we must somehow learn from our recent experiences as we determine how best to proceed.

Micha Tomkiewicz, Ph.D., is a professor of physics in the Department of Physics, Brooklyn College, the City University of New York. He is also a professor of physics and chemistry in the School for Graduate Studies of the City University of New York. In addition, he is the founding-director of the Environmental Studies Program at Brooklyn College as well as director of the Electrochemistry Institute at that same institution.
View all posts by climatechangefork →
This entry was posted in Climate Change and tagged Clean Energy, Climate Change, Climate Change Deniers, Climate Skeptics, Emissions, Feeding Transition, Fossil Fuels, Global Population, Global Warming, IPCC, Kyoto Protocol, Power Plants, Science, UNFCCC. Bookmark the permalink.