Posted on July 9, 2013 by climatechangefork

The power of analogy can just as easily be used productively or be abused. I was accused of the latter when I compared the general populace’s inactivity in the 1930s to prevent the Nazis’ early efforts at ethnic cleansing (which later led to the Holocaust), with our present unwillingness to prevent the deaths of millions or billions that could result from anthropogenic climate change (May 14, 2012). I was attacked, both by people that believe in climate change, who claimed that I was cheapening the Holocaust, and by people that do not believe in climate change, who saw this as a cheap way to raise the temperature of the debate (see comments on that blog post). The only way that I could respond to such criticism was to go to the dictionary definition of Genocide and to correlate it with the details and uncertainties of trying to predict the impact of climate change in a business as usual scenario.

Again, in an attempt to uncover the truth or falsehood of such an analogy we must go to the numbers and to basic science on both ends of this comparison – that of climate change and that of the bomb at Hiroshima.

A detailed, credible description of the Hiroshima bomb (“Little Boy”) can be found (as usual) on Wikipedia. The bomb was dropped on Hiroshima on August 6, 1945 by the United States Army Air Force. It was the first of the two consecutive bombs. The explosive power of the bomb came from the nuclear fission of uranium 235. The bomb weighed 9,700lb (4,400 kg), of which approximately 1g was converted into energy. The explosive power of this energy amounted to 67TJ (equivalent to 16 thousand tons of TNT). An estimated 90,000 – 166,000 people were killed during its explosion.

What has this got to do with climate change? To look at the analogy simply in terms of loss of life on such a massive scale is both too general and completely confusing. In actuality, the analogy is based on the amount of released energy that can be calculated for both climate change and the bomb. To be clear, this does not factor in the other aspects of the bomb- namely the immediate destruction, radiation, and all around horror that it caused; here we are focusing only on the energy released.

(Warning: the next section contains SCIENCE- but I promise it’s worth it!)

The information about the energy that was released by the bomb is given in two forms: the 1g of bomb material that was converted to energy and the 67TJ of energy it produced. The two forms are connected through Einstein’s famous E = MC2 formula, where E is the energy (given in the energy unit of Joules), M is the mass (given in kg) and C is the speed of light, a constant equal to 300 million (3×108) meters/second (671 million miles/hour).

So 1g of energy converted is:

E(Joules) = (0.001kg)x(3×108)2 = 90×1012 Joules = 90TJ (Where T stands for Tera, which is equivalent to trillion). The difference between the 67TJ that is given in the Wikipedia and the 90 TJ that we have estimated here is because our 1g conversion is a rounded number. This amounts to a 30% difference, which does not play a very significant part in our analysis. The Joule is a common unit of energy that is related to BTU (British thermal unit) by 1 BTU = 1055 Joules. The Joule is more familiar to many of us through the use of another unit – the Watt (100W light bulb). The Watt, however, is not a unit of energy but a unit of power. 1Watt = 1 Joule/second.

The only possible valid analogy between climate change and the Hiroshima bomb comes if we use bomb as a unit of energy that approximately amounts to 100TJ.

We are now ready to try to calculate the other end of this analogy – the energy that is being released through climate change. This is done through a parameter called “Radiative Forcing.”

Radiative Forcing is defined as “the difference between radiant energy received by the earth and energy radiated back to space.” A positive forcing is defined as more radiation coming in than going out, thus warming the surface; negative forcing describes the opposite and its cooling of the surface. The IPCC was able to assemble the data for many greenhouse gases. The corresponding values are given below: 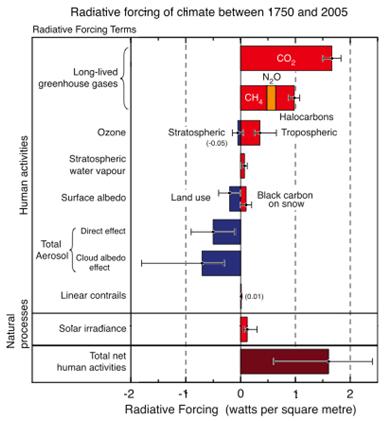 The measurements are taken at the top of the lowest level of the atmosphere – the troposphere. The commonly used reference year is 1750, which is seen as the (somewhat arbitrary) starting point of human industrial activities and our heavy reliance on fossil fuels. The units are in watt/m2. One can see that the net total radiative forcing that is associated with human activities is about 1.6watt/m2, with carbon dioxide as the dominant contributor. To convert the radiative forcing to the net heat that is added to the Earth, we have to multiply this number by the surface area of the lower atmosphere and by the time since 1750. Using this full number in our calculations would be an exaggeration, because in the earlier years of that spectrum, the net radiative forcing that was caused by human activity was much smaller. To give an order of magnitude, we can assume that the significant increase in human activity started in 1950 (the transistor was invented in 1948) and since most of the increase took place recently, we will instead take this time and divide it by two, assuming that the increase is linear. The resulting time comes out to be 8.7×108 seconds.

We will now multiply these two large numbers by the radiative forcing to get the total energy that was absorbed because of the energy imbalance that was created by human activity.  After doing the math, we are left with the astounding number of 7×1023Joules. To express that number using the unit of the Hiroshima bomb, we will divide this number by 1014, which gives us 7×109 or 7 billion equivalents of Hiroshima bombs falling on the Earth at a “constant” rate 5 bombs every second or around 18,000 bombs a day since about 1950. That is the approximate number, give or take a factor of 2 bombs per day (which can result from using different sets of assumptions), that is currently floating around on the lecture circuits and the blogosphere. If you want to argue with any specific assumption that was made here, you are more than welcome to try your own hand at this exercise.

One last comment on this issue: 5 Hiroshima bombs per second over 55 years unquestionably qualifies under the definition of nuclear holocaust. Even without doing much research on the topic, if we associate the climatic consequences of a nuclear holocaust of a much smaller size, with the concept of “Nuclear Winter,” (which I associate with the American Astrophysicist Carl Sagan) the results are rather frightening.  Wikipedia provides a rather extensive description of the background of the concept. They define Nuclear Winter as:

Nuclear winter (also known as atomic winter) is a hypothetical climatic effect of countervalue nuclear war. Models suggest that detonating nuclear weapons could have a profound and severe effect on the climate causing cold weather and reduced sunlight for a period of months or even years if the nuclear weapon strikes are on cities, comparable to Hiroshima, where it is modelled that large amounts of smoke and soot would be ejected into the Earth‘s stratosphere.[1]

Similar climatic effects can be caused by comets or an asteroid impact,[2][3] also sometimes termed an impact winter, or by a supervolcano eruption, known as a volcanic winter.[4]

That is for one bomb; if we then multiply that concept to reflect our scope of billions, we can understand the potential impact worldwide. Taking that into account– the analogy seems not to be restricted to a choice of energy units but actually converges into catastrophic climatic consequences that will leave nothing unaffected. Maybe using the bomb at Hiroshima will help us to visualize the significance of the outcome of climate change. It’s alright that the image is controversial– we need people to pay attention.

Micha Tomkiewicz, Ph.D., is a professor of physics in the Department of Physics, Brooklyn College, the City University of New York. He is also a professor of physics and chemistry in the School for Graduate Studies of the City University of New York. In addition, he is the founding-director of the Environmental Studies Program at Brooklyn College as well as director of the Electrochemistry Institute at that same institution.
View all posts by climatechangefork →
This entry was posted in Climate Change, Education and tagged Atomic Winter, Bomb, Carl Sagan, Climate Change, Climate Denial, Climate Skeptics, Genocide, Global Warming, Hiroshima, Holocaust, James Hansen, Little Boy, Nuclear, Nuclear Winter. Bookmark the permalink.