Back to Water – Israel in the Lead

Posted on March 4, 2014 by climatechangefork

I am back to focusing on water (you can use the search engine here to find the previous related blogs) for two important reasons:

Here I would like to shift to water management, using the example of Israel once again, since it has become a figure for emulation in the United States. Through its efforts in water management, Israel, which sits in a historically water-thirsty region, has gone from a country in severe water stress to one that can actually export significant amounts of water to its neighbor to achieve policy objectives. Israel is now receiving almost universal praise for its efforts in this area. I will elaborate later on the meaning of “almost.”

The graph above is probably one of the best testaments to the success of this water management policy. Over the last 20 years or so, water use for agriculture has been kept steady, even while crop production increases. As we will see shortly, one of the main tools for this accomplishment has been an increase in the price of the water. The graph was posted by an objective arbiter, and I am using it so as to avoid any potential political (pro-Israeli) bias.

I will introduce the Israeli water management system with the use of two documents: the first is a 2006 PowerPoint presentation by Gilad Fernandes, who served as Deputy Director-General of the Water Authority, while the second document is an article from the Israeli newspaper, Haaretz that describes the present situation.

To make the presentation readable I have converted it into an outline in document form.

Management of the Water Section in Israel: 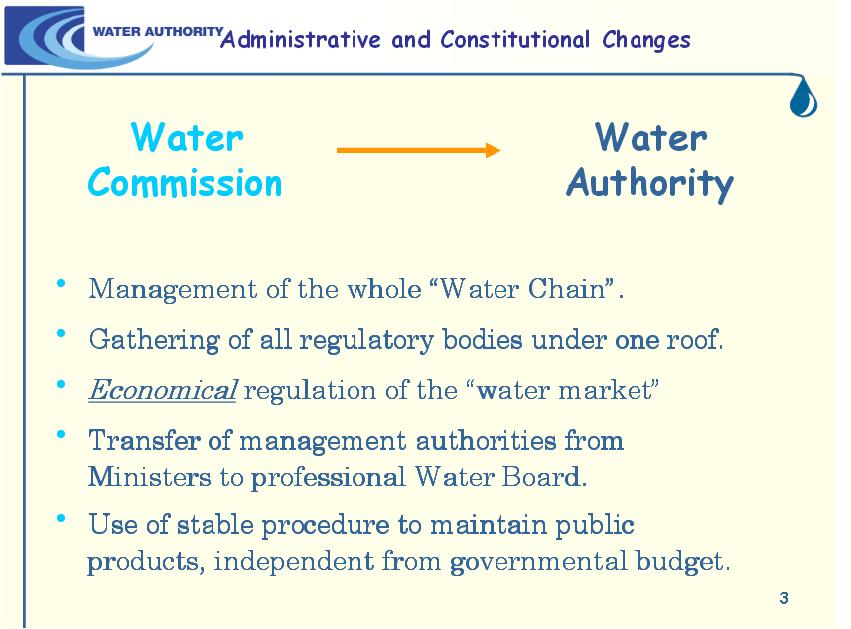 Excerpts from the Haaretz article about the present situation:

In ancient times and even during the years of the British Mandate (1917-1948), the shortage of water in Palestine, as well as among its neighbors in the Middle East, had a decisive influence not only on the area’s economic development, but also on the political strife between Jews and Arabs. Technology has changed all this. Now, the ability to produce all the water that’s needed, whether for human consumption or for agriculture, may soon change our way of life and perhaps even, if our neighbors agree, bring peace closer.

There is now a surplus of water in Israel, thanks largely to the opening of several new desalination plants – and the development of natural-gas fields that can power them cheaply. Since water is the source of life, the well-known Israeli imperative to “save every drop” should still be respected. But the price the Israeli population is charged for its water supply should be reduced by more than the 5 percent drop announced on January 1 of this year.

Desalination in Israel began in 1973, when Mekorot built facilities that operated by reverse osmosis; these supplied the Dead Sea, Eilat and communities not served by the National Water Carrier. It was only 35 years later, in 2008, that the government decided to establish five large desalination plants along the Mediterranean coast, with the aim of providing 505 million cubic meters of water a year by 2013 (a forecast met in full) and 750 million cubic meters a year by 2020. However, since 2008, two technological revolutions – both of which also have far-reaching political implications – have radically altered the water situation in Israel.

The first revolution is the immense decrease in the cost of desalination – from $1 per cubic meter to 40 cents, and even less than that in desalination plants built in Hadera, Palmahim, Ashkelon and at Sorek. The savings will grow further thanks to the use of Israeli natural gas instead of electricity to power the plants. The second revolution is the success of the plants used to purify sewage water that were built adjacent to Israel’s cities and towns. Thanks to efficient usage, this water now irrigates most of the country’s field crops

There are at least three explanations for this uncharacteristic silence, in the face of success and the concomitant abundance of water Israel now enjoys. One is that even though the cost of desalination has fallen considerably, the government promised the investors a high price for the water. The government can reduce the amount of water it buys from the desalination facilities, but it cannot pay less than what it promised.

In the next blog I will compare the situation in Israel to the one in the US, focusing specifically on California.

For now, let’s revisit the “almost” qualifier that I mentioned in the beginning of the blog. Two related events took place recently. One is the water situation in Gaza, for which Israel is partially responsible. The Gazans don’t have the power to clean their sewage and are forced instead to dump it in the Mediterranean. The northern border of Gaza is only a few miles from the large Israeli city of Ashkelon, where one of the largest Israeli desalination facilities is located. Ashkelon will not be isolated from the sea dumping for long. I detailed this situation in a previous blog (December 2, 2013), which was based on an Op-Ed in the New York Times. The article was co-authored by Alon Tal, who teaches at Ben-Gurion University of the Negev and is a visiting professor at the Center for Conservation Biology at Stanford University, and Yousef Abu-Mayla, a water expert at Al Azhar University in Gaza.

The second issue is more recent. The President of the European Parliament came to visit Israel. He was heckled during his speech in the Israeli Parliament for saying that he had heard that “Palestinians get 17 liters of water for every 70 Israelis get,” and his comment prompted the Economic Minister and his entire Bayit Yehudi (Jewish Home) party to leave in protest.  The strong prevailing impression is that while the water management system is great for the Jewish population, it is not disconnected from the Israeli-Palestinian conflict. The Israeli water management system’s success can serve as an encouraging example of how to handle human development indicators for long term sustainability – provided that it is combined with a clear non discrimination policy. On the face of it – in terms of theory – the system is disconnected from short term politics. This disconnection needs to be extended to the implementation stage. More on this in future blogs.

Micha Tomkiewicz, Ph.D., is a professor of physics in the Department of Physics, Brooklyn College, the City University of New York. He is also a professor of physics and chemistry in the School for Graduate Studies of the City University of New York. In addition, he is the founding-director of the Environmental Studies Program at Brooklyn College as well as director of the Electrochemistry Institute at that same institution.
View all posts by climatechangefork →
This entry was posted in Climate Change and tagged Bard College, CEP, Climate Change, Desalination, Israel, National Climate Seminar, Palestine, Sustainability, Technology, Water, Water Authority, Water Cycle, Water Management, Water Stress. Bookmark the permalink.

1 Response to Back to Water – Israel in the Lead