Maine: Codfish Adaptation – Fishermen’s Distress and What the Rest of the World Can Do About It.

Posted on January 27, 2015 by climatechangefork

With a few small changes, the title of this blog could represent (and ring true for) almost anywhere on Earth. I am focused on Maine right now because I think that something can be done about its situation that could be successfully adopted in other locations.

Last week’s blog centered on two articles in the New York Times that addressed the recent migration of codfish away from Maine’s coast and the regulatory agencies’ reaction of limiting fishing in an attempt to minimize the stress on the fish. The imposed limits had a major impact on the ability of the fishermen to make a living. The three key paragraphs in the Wines & Bidgood article read as follows:

In decades past, the gulf had warmed on average by about one degree every 21 years. In the last decade, the average has been one degree every two years. “What we’re experiencing is a warming that very few ocean ecosystems have ever experienced,” said Andrew J. Pershing, the chief scientific officer for the Gulf of Maine Research Institute here.

Joe Orlando, 60, who fishes from a Gloucester, Mass., base, said the effect of the ban was terrifying. “It’s completely, completely over,” he said. “I got a house, kids, payments.”

But many other fishermen do not blame climate change. They blame the regulators, calling the moratorium cruel and needless, because they say their latest cod catches are actually better than in recent years. More than a few talk of a conspiracy between scientists and environmentalists to manufacture a fishing crisis that will justify their jobs.

The second article considerably expanded upon the history of the problem, all the way back to the end of the 19th century when climate change was not yet a real issue:

PORTSMOUTH, N.H. — IN November, regulators from the National Oceanic and Atmospheric Administration shut down recreational and commercial cod fishing in the Gulf of Maine, that enchanting arm of the coastal sea stretching east-northeast from Cape Cod. They did not have much choice: Federal law requires action to rebuild fish stocks when they are depleted, and recent surveys revealed cod populations to be at record lows, despite decades of regulations intended to restore them.

Yet annual cod landings in the Gulf of Maine continued to slide, from about 70,000 metric tons in 1861 to about 54,000 metric tons in 1880, to about 20,000 tons in the 1920s, to just a few thousand metric tons in recent years. There have been a few upticks along the way, such as one bumper year in the mid-1980s when the cod catch reached 25,000 tons (due, in part, to an unnecessarily large expansion of the fishing fleet), but for the most part the trend has been noticeably downward since the era of the Civil War.

Again, the difference between the two perspectives is hidden in the numbers and the first paper provides some of those. Major changes in any species’ abundance can result from large modulations in reproduction rates, mortality and/or migrations. Within these parameters, the shift can often be traced back to changes in either the habitat or the species’ vulnerability to predation. For the fish in Maine the changes in predation are coming from overfishing and now the changes in the habitat are dominated by climate change. The main effect of climate change that impacts the fish is the temperature rise. In decades past, the water was warming by an average of one degree every 21 years; in contrast, over the last decade, the water was warming at a rate of one degree every two years! This is not surprising because over the last decade almost every year was the hottest in history – this is climate change and the cod is trying desperately to adapt, but the fishermen don’t want to hear about it.

Figure 1 shows the global situation as recorded in the IPCC’s latest report about other species that are trying to adapt by moving:

Most of the species mentioned in the graph can move. Trees and other plants cannot. They move through selective pollination and through changes in predator distribution. It is estimated that the massive Boreal Forest that covers most of inland Canada and Alaska, most of Sweden, Finland and inland Norway, much of Russia, and the northern parts of Kazakhstan, Mongolia and Japan – and represents 29% of the world’s forest cover – will be unrecognizable in terms of species distribution toward the end of the century.

The potential speed of movement is given for various species (not fish – sorry – we will get back to them shortly) in different scenarios. In the past, I’ve discussed various RCP scenarios (October 14 – 28, 2014). The RCP2.6 scenario is the “environmentally friendly” one, in which the increase in temperature at the end of the century stays below 2oC; the RCP8.5 scenario, meanwhile, is the “business as usual” scenario where the global average temperature is projected to increase by close to 5oC. In an environmentally friendly scenario nobody moves; in the “business as usual” scenario, everybody must move to follow preferred environments. The uncertainties here are very large, though, and we still have a lot of work to do.

Fish are important and relatively easy to follow. Figures 2 and 3 show historical fish migrations based on NOAA data. 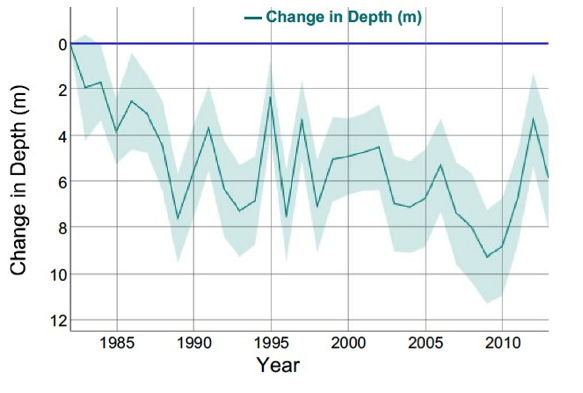 The distance that corresponds to a change of latitude by 1 degree is about 69 miles. 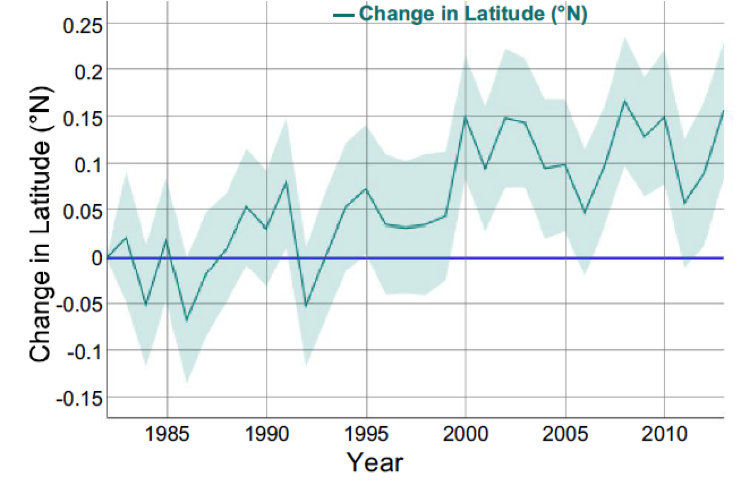 There is no question that cod are trying to adapt to the climate by migrating north and going deep. If we are making a living out of catching the fish we ought to adapt to the fish’s adaptation. The only way that I know that this can be done is through education (of people, not fish) but how? Maine, like any other place in the US and the rest of the world has plenty of opportunities for adult education. Searching for adult education in Maine gets me to a site that tells me that I have 4,953 courses to choose from and directs me to find a local program. I went to Maine’s largest city, Portland, which is located on the coastline, and clicked climate change. I found three relevant courses: one about composting, one about Transition towns or how shifting energy practices are changing our lives, and one on “The Wisdom to Survive” – testimonies by scientists about climate change. But how likely is it that the fishermen who already have a house, kids and payments will register? What’s the reality of educating this demographic? Alternatively, can we find a Katherine Hayhoe (see last week’s blog) in the form of a scientist/fisherman that can chat with the fishermen like Katherine was doing with the evangelists in Texas? I am sure that we will find many. It is likely that all of them go fishing as a recreational activity, though, earning their livelihood in science (like Katherine Hayhoe does). Unlike the fishermen of Maine, most of the evangelists in Texas that Prof. Hayhoe was interacting with do not make their livelihood in religion.

It seems to me that a much better alternative is for the government to create a small paid internship program where willing fishermen could take some of their vacation time to join the scientists in trying to map where the fish are going, then hopefully discuss the broad results with their friends and fellow fishermen. The focus would be on data collection rather than opinion or advice. A good host for such a program would be the Island Institute:

The Island Institute works to sustain Maine’s island and remote coastal communities. Our core program areas—including economic development, education, community energy, marine resources, and media—are driven by the requests of community members themselves. Our core commitment to the islands of Maine includes sharing what works among these diverse communities and beyond.

The Island Institute is already partnering with Maine’s Fishermen’s Association, which has experience in raising funds and being involved in community education. The internship program to connect professional fishermen with scientists would require the Institute to expand its activities beyond its current geographic foci, to target vulnerable populations in need of help. My first exposure to their activities came at a 2013 AAAS (American Association for the Advancement of Science) meeting in Boston where they reported about their NSF (National Science Foundation) funded research effort in community education. NSF is insistent that its funded efforts will have a comprehensive assessment component that specifies goals and progress in achieving the goals. If the Island Institute is able to secure NSF funding for the internship program, it will be money well spent.

I am now at the tail end of a semester break. Among other things, I am filling my spare time reading The Sixth Extinction, a new book by Elizabeth Kolbert, which focuses on man’s role in major species extinction. I’ve also been reading, “Marine Defaunation: Animal Loss in the Global Ocean,” an important paper that came out in Science Magazine (Science, 347, 247 (2015)). Many of us probably need to look up what that means, so to save you the trouble, defaunation (according to Wikipedia) is:  the “loss of animals from ecological communities.” A recent New York Times article highlights that study. Next week I will try to expand from the situation in Maine to the oceans at large.

3 Responses to Maine: Codfish Adaptation – Fishermen’s Distress and What the Rest of the World Can Do About It.