The Sun as an Example of Stability Through Balance of Forces

Posted on November 8, 2016 by climatechangefork

I am posting this on Election Day; I have no idea as to how the vote will pan out but I think all of us can agree that the results will be highly consequential. With this much at stake, any decision not to vote or vote for minority candidates might have disastrous effects. The only relevant thing left for me to do is to encourage everyone to vote.

Since I don’t want to take a “vacation” from posting on Election Day I will instead retreat to safer (less-political) ground: looking at our sun, an important natural system that works on the principle of dynamic equilibrium of two forces.

Our sun was formed about 4.6 billion years ago via a process illustrated in Figure 1.

It exists under what we call a hydrostatic equilibrium where at each point the outward push of pressure is balanced by the inward pull of gravity.

Our solar system, like billions of other star systems, formed out of stellar material that was subjected to three basic forces: gravity, pressure, and conservation of angular momentum. The only one of these scientific terms that is uncommon in everyday use is angular momentum. In physics, angular momentum is the combined product of linear momentum (mass and velocity) and the radius of the rotational motion. In the universe, almost everything rotates around something. Figure 1 shows that the process starts within a large cloud made up of the remnants of dead stars and primordial material left over from the original formation of the universe in the big bang, which happened roughly 13.8 billion years ago. The chemical composition of such a cloud is mostly hydrogen and helium, with very small quantities of heavier elements: residue from previous stars. The death process of every star starts with the exhaustion of hydrogen fuel from its core.

Gravity is an attractive force that becomes stronger as the objects approach each other. Within the denser parts of the cloud, therefore, as the dispersed masses compress, the power of gravity increases. As a result of this self-reinforcing process, most of this material condenses into a dense center called a protostar, as shown in part B.

At the same time that gravity works its wonders, the cloud spins and angular momentum exerts its own influences. The conservation of angular momentum requires that as the radius of the rotation decreases due to the gravitational attraction, the velocity of the rotation increases. In other words, the closer something is to the center, the faster it spins. As a result, the contraction of the cloud will be much greater perpendicular to the axis of rotation than parallel to it. A layout similar to that shown in Figure 1C emerges as the solar system takes the shape of a narrow disk.

The satellites that we see in Figure 1C represent the relatively small percentage of material that failed to fully consolidate within the protostar. Eventually these satellites coalesce to form the planetary system.

As the protostar compresses, its temperature rises; when the core contracts to its highest density, the temperature rises to around 10 million degrees Celsius (or 18 million Fahrenheit). The immensely high temperature and high density of the core are sufficient to ignite the powerful nuclear fusion of hydrogen to helium, generating a sizable amount of energy (a nuclear process similar to that of hydrogen bombs, developed after WWII). This fusion made our sun into a functioning star. 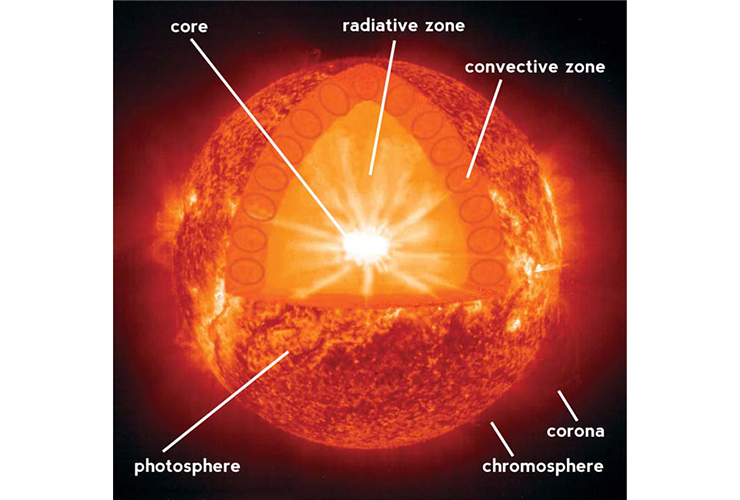 Figure 2 – Structure of the sun

The energy radiated from the surface of the sun balances that produced by its core. In about 5 billion years the sun is expected exhaust its supply of hydrogen and begin the red giant stage of its decay: the core will eventually separate from its shell. It will be converted into a white dwarf as its shell disperses into one of many clouds that will later form new stars.

As shown in part D of Figure 1, the planets were formed out of the leftover dreck from the sun’s conception. In a similar manner to the birth of the star, dust particles began to cluster, then gathered larger and larger fragments as the gravity of the combined mass gained strength.

Here is what would happen if one of the two opposing forces that maintain the sun’s equilibrium suddenly ceased to exist: first, ending the core’s hydrogen fusion, stops the outward pressure. In fact, this is a naturally occurring phenomenon that comes about when the hydrogen in the core of any star starts to run out. This marks the beginning of the star’s death. Lacking an opposing force, the core will continue to contract until a new stabilizing force emerges. In the case of the sun and similar stars, this takes the shape of electrons crammed so densely together from the core’s collapse that they convert into high density carbon. The resulting object, called a white dwarf, is very stable. For heavier stars, this countering force is not enough and the core will be converted either to a neutron star – which has a density of more than a billion times that of a white dwarf, or – in the case of even heavier stars – a black hole, which sucks in everything, including light. The shells of these heavier stars will not separate “smoothly” like the sun but with a violent and spectacular supernova.

If, on the other hand, outward pressure continued and somehow gravity ceased to exist (a hypothetical impossible in real life), the sun would disperse until the temperature of its components cooled to that of the surrounding space. In effect, the entire mass would have a similar fate to the sun’s shell, serving when conditions are right, as fodder for the birth of new stars.

In both cases, the disappearance of one of the opposing forces that keeps the sun together would result in the sun’s destruction.

As with the sun, the opposing forces and checks and balances within the branches of the government are key to the stability of state governance.