Posted on November 1, 2016 by climatechangefork

By the time this blog goes up, we will be exactly one week from the election. Most of us will be greatly relieved (almost independent of the results) when this presidential campaign is over. This was probably the most disturbing campaign that the majority of us have lived through – especially with regards to Donald Trump’s nomination as the Republican Party candidate and Russia’s active participation via hacking and WikiLeaks – mostly to Trump’s benefit. The selective hacking activities have made private communication public, considerably raising the temperature of the discourse.

Many have attempted to rationalize the high support that Donald Trump has enjoyed throughout this campaign. Significant segments of the population polled reported their strong support for the candidate. These segments include white males with no college education, and white citizens older than 50 (those within the Baby boomer generation). As I detailed last week, gender is also a significant factor.

A few days ago, the NYT printed Alec MacGillis’ Op-Ed, “Go Midwest, Young Hipster: If you really want Democrats to win in Iowa, move there.” MacGillis raised a central issue of the American governance system that acted as a “teaching opportunity” to me and invited a closer look. The issue can be summed up with the word “clustering.”

Liberals have a simple explanation for this state of affairs: Republican-led gerrymandering, which has put Democrats at a disadvantage in the House and in many state legislatures. But this overlooks an even bigger problem for their party. Democrats today are sorting themselves into geographic clusters where many of their votes have been rendered all but superfluous, especially in elections for the Senate, House and state government.

Americans’ tendency toward political self-segregation has been underway for a while now — it’s been eight years since Bill Bishop identified the dynamic in “The Big Sort.” This helps explain why red-blue maps of so many states consist of dark-blue islands in the cities surrounded by red exurbs and rural areas, a distribution that is also driven by urban concentrations of racial minorities and by the decades-long shift in allegiance from Democratic to Republican among working-class white voters.

The title of the article suggests a remedy. Definitions of the term hipster vary widely but one of the more basic entries explains the phrase as “a person who follows the latest trends and fashions, especially those regarded as being outside the cultural mainstream.” I am certainly not young; nor am I a hipster. However, I am white with the highest educational degree available. Additionally, I am a liberal living in New York City. New York is a state with an overwhelming majority of Democrats. In the 2012 elections, New Yorkers gave President Obama 63% of their vote while Mitt Romney only received 35%. In the same election, Obama got 52% of the vote in Iowa and a mere 50% in Florida, meaning that he barely carried the state. Clearly, my vote for a Democratic candidate carried considerably lower weight in New York than it would have in Iowa or Florida.

I mentioned MacGillis’ suggestion to my wife and posited that we might follow it in spite of not being young or hipsters. She gave me a funny look.

I decided to dig a bit deeper.

If the only clustering that takes place involves young hipsters or guys like me moving to hubs like New York, Massachussetts or California where Democrats significantly outnumber Republicans, the populations of these places should show growth while those of Iowa and other midwestern states should decrease, thus expanding the voting power of local Republicans. 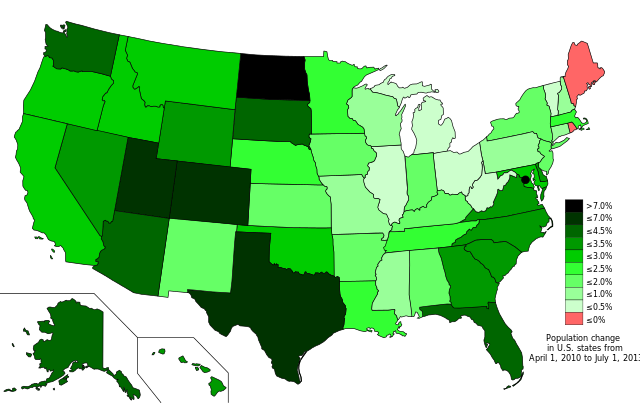 By Ali Zifan – Own work; Map is based on data from United States Census Bureau.

Figure 1 shows the state population growth between the two recent census periods. New York is growing at a rate of around 2%, while California’s rate is a bit of higher. Both states are Democratic strongholds. Iowa is growing at approximately the same rate as New York. States that are growing at the fastest are Texas and North Dakota, two solid Republican states. Clearly there are other clusters forming than Liberal enclaves; these numbers show, however, that there are additional driving forces behind these migrations. Jobs, housing prices, climate, taxation, and education opportunities are obvious contenders.

I am not a political scientist (nor were the Founding Fathers who drafted the US Constitution) but in an election year like the one we are having, you don’t have to see Hamilton (I am lucky enough to have scored tickets for next spring) to appreciate their greatness. Through the US Constitution, they constructed a stable democracy that is not based on a one man, one vote system where all the votes weigh equally but rather on a dynamic equilibrium that is aims to balance opposing forces. Here are the relevant articles of the Constitution that mandate the American election systems:

The House of Representatives shall be composed of Members chosen every second Year by the People of the several States, and the Electors in each State shall have the Qualifications requisite for Electors of the most numerous Branch of the State Legislature.

The Senate of the United States shall be composed of two Senators from each State, chosen by the Legislature thereof, for six Years; and each Senator shall have one Vote.

The executive Power shall be vested in a President of the United States of America.

He shall hold his Office during the Term of four Years, and, together with the Vice President, chosen for the same Term, be elected, as follows:

Each State shall appoint, in such Manner as the Legislature thereof may direct, a Number of Electors, equal to the whole Number of Senators and Representatives to which the State may be entitled in the Congress: but no Senator or Representative, or Person holding an Office of Trust or Profit under the United States, shall be appointed an Elector.

The Electors shall meet in their respective States, and vote by Ballot for two Persons, of whom one at least shall not be an Inhabitant of the same State with themselves. And they shall make a List of all the Persons voted for, and of the Number of Votes for each; which List they shall sign and certify, and transmit sealed to the Seat of the Government of the United States, directed to the President of the Senate. The President of the Senate shall, in the Presence of the Senate and House of Representatives, open all the Certificates, and the Votes shall then be counted. The Person having the greatest Number of Votes shall be the President, if such Number be a Majority of the whole Number of Electors appointed; and if there be more than one who have such Majority, and have an equal Number of Votes, then the House of Representatives shall immediately chuse by Ballot one of them for President; and if no Person have a Majority, then from the five highest on the List the said House shall in like Manner chuse the President. But in chusing the President, the Votes shall be taken by States, the Representation from each State having one Vote; A quorum for this Purpose shall consist of a Member or Members from two thirds of the States, and a Majority of all the States shall be necessary to a Choice. In every Case, after the Choice of the President, the Person having the greatest Number of Votes of the Electors shall be the Vice President. But if there should remain two or more who have equal Votes, the Senate shall chuse from them by Ballot the Vice President.

Unless the Constitution changes dramatically, Iowa will have its two senators to protect its interests from damaging legislation. This will remain the case no matter how many young hipsters move from Iowa to New York or LA and no matter how many people flock to North Dakota or Texas in search of a better job and lower taxes. The number of congress members per state changes periodically with every census to approximate population changes. The number of electors in the Electoral College for president reflects that balance of congressional changes. However, with the exceptions of Maine and Nebraska, all of the electors in a state go to the winner of the popular vote – whether that candidate wins by 1% or 30%.

Imagine the situation that would have developed under a one man, one vote system under the current global urbanization trends. In 1790 only about 5% of the population lived in urban areas, the rest living in rural areas. Today more than 80% of the population in the US lives in urban areas. This is clustering. Yet our election system that determines our governance was drafted in 1787. Imagine if the one man, one vote principle had prevailed. The urban 80% would have completely dominated the government. Out of pure self-interest, they’d likely determine that urban areas are tax free zones. Urban residents would instead live off of the “generosity” of the rural residents. Everybody would flock to the cities, unbalancing the economy and destroying the production of food, and the whole system will collapse.

I can elaborate on the consequences of clustering but I credit our Founding Fathers with being future-looking geniuses that created a governance system stable enough to survive even Donald Trump.

The next blog will be posted on Tuesday, November 8, Election Day. I will vote and go about my regular business – as ignorant as everyone else about what kind of government we will create. Meanwhile I will retreat to the safety of science and describe another system that was formed through an equilibrium of opposing forces; one that has been rather stable for the last 4.6 billion years, and which we expect will stay so for another 5 billion years – our sun.