Posted on January 2, 2018 by climatechangefork 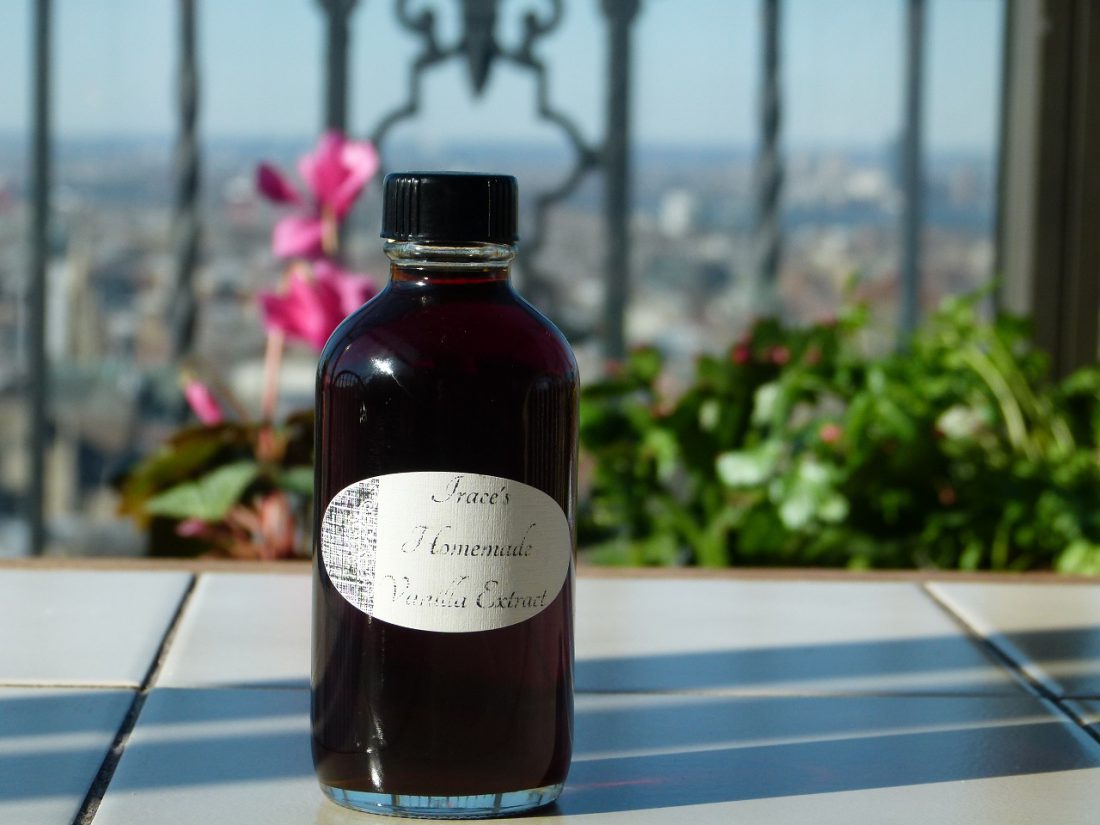 Happy New Year!!! I got a yummy Christmas present from a family member that doubled as a hint to try to improve my cooking: homemade vanilla extract. They got the vanilla beans from Honduras and immersed them in vodka!

As a good giftee, I will use the extract in some of my food preparation (I like the flavor). The gift also reminded me of a time a few years back when a gentleman from our neighborhood came to my school to ask for advice on how he could distinguish a “natural” vanilla flavor from an artificial one. Neither I, nor any of my colleagues, could come up with satisfactory answers but we were intrigued with the differentiation he sought.

My own interest this distinction is a bit broader: I want to know how to convince all of you that the global climate change that we are experiencing is “artificial,” as in man-made or anthropogenic, and not “natural.”

I get constant complaints from many good friends for naming carbon dioxide and methane – the main components of natural gas – as pollutants that cause climate change. This is especially true given how often I blame climate change for the ultimate slaughter of our children and grandchildren should we continue our business-as-usual living practices. After all, humans and most other living organisms, exhale carbon dioxide and we and many animals around us naturally emit flatulence with methane as an important component.

Well, I will try to start our new year with the much more pleasant vanilla flavor and follow that up next time by utilizing a common technique for distinguishing natural from artificial vanilla to parallel the differences between natural and artificial origins of climate change. We will find that in both cases a learning curve is required to follow some of the language used.

The main interest of the gentleman that came to us seeking help to distinguish the source of the vanilla was money. According to him, many people who sell the extract and claim it to be natural are cheating and actually sell the much cheaper artificial variety at a bumped-up price. Our interest in realizing that we are the instigators of most of the climate change that we are experiencing is to also understand that it is up to us to stop that forward momentum.

The essence of the identification of the origin of vanilla is legal, as Forbes’ Eustacia Huen writes in, “What Manufacturers Really Mean By Natural And Artificial Flavors”:

According to the U.S. Food and Drug Administration’s (FDA) Code of Federal Regulations (Title 21), the term “natural flavor” essentially has an edible source (i.e. animals and vegetables). Artificial flavors, on the other hand, have an inedible source, which means you can be eating anything from petroleum to paper pulp processed to create the chemicals that flavor your food. For example, Japanese researcher Mayu Yamamoto discovered a way to extract vanillin, the compound responsible for the smell and flavor of vanilla, from cow poop in 2006, as reported by Business Insider.

Gary Reineccius’, “What is the difference between artificial and natural flavors?” in Scientific American defines it somewhat differently:

Natural and artificial flavors are defined for the consumer in the Code of Federal Regulations. A key line from this definition is the following: ” a natural flavor is the essential oil, oleoresin, essence or extractive, protein hydrolysate, distillate, or any product of roasting, heating or enzymolysis, which contains the flavoring constituents derived from a spice, fruit or fruit juice, vegetable or vegetable juice, edible yeast, herb, bark, bud, root, leaf or similar plant material, meat, seafood, poultry, eggs, dairy products, or fermentation products thereof, whose significant function in food is flavoring rather than nutritional.” Artificial flavors are those that are made from components that do not meet this definition.

So is there truly a difference between natural and artificial flavorings? Yes. Artificial flavorings are simpler in composition and potentially safer because only safety-tested components are utilized. Another difference between natural and artificial flavorings is cost. The search for “natural” sources of chemicals often requires that a manufacturer go to great lengths to obtain a given chemical. Natural coconut flavorings, for example, depend on a chemical called massoya lactone. Massoya lactone comes from the bark of the Massoya tree, which grows in Malaysia. Collecting this natural chemical kills the tree because harvesters must remove the bark and extract it to obtain the lactone. Furthermore, the process is costly. This pure natural chemical is identical to the version made in an organic chemists laboratory, yet it is much more expensive than the synthetic alternative. Consumers pay a lot for natural flavorings. But these are in fact no better in quality, nor are they safer, than their cost-effective artificial counterparts.

As we can read in the last two paragraphs of the Scientific American piece, in terms of functionality (i.e. flavor) there is not much difference between the “artificial” and the “natural”; if anything, the synthetic variety is considerably purer.

Chemical & Engineering News (CEN) tackles the full complexity of the issue in Melody M. Bomgardner’s, “The problem with vanilla: After vowing to go natural, food brands face a shortage of the favored Flavor.” The essence of this article is easily summed up as follows:

Vanilla is perhaps the world’s most popular flavor, but less than 1% of it comes from a fully natural source, the vanilla orchid. In 2015, a host of big food brands, led by Nestlé, vowed to use only natural flavors in products marketed in the U.S.—just as a shortage of natural vanilla was emerging. In the following pages, C&EN explains how flavor firms are working to supply.

However, we need to delve in farther.

In Réunion, output of vanilla soared thanks to the Albius method, and orchid cultivation expanded to nearby Madagascar. Today, about 80% of the world’s natural vanilla comes from smallholder farms in Madagascar. There, locals continue to pollinate orchids by hand and cure the beans in the traditional fashion.

It didn’t take long for vanilla demand to exceed supply from the farms of Madagascar. In the 1800s and 1900s, chemists took over from botanists to expand supply of the flavor. Vanillin, the main flavor component of cured vanilla beans, was synthesized variously from pine bark, clove oil, rice bran, and lignin.

Rhône-Poulenc, now Solvay, commercialized a pure petrochemical route in the 1970s. In recent years, of the roughly 18,000 metric tons of vanilla flavor produced annually, about 85% is vanillin synthesized from the petrochemical precursor guaiacol. Most of the rest is from lignin.

But the traditional vanilla bean is starting to enjoy a renaissance, thanks to consumer demand for all-natural foods and beverages. Last year, a string of giant food companies, including General Mills, Hershey’s, Kellogg’s, and Nestlé, vowed to eliminate artificial flavors and other additives from many foods sold in the U.S.

Figure 2 – The various ways to Vanillin

There is a problem, however: World production of natural vanilla is tiny and has been falling in recent years. Less than 1% of vanilla flavor comes from actual vanilla orchids. With demand on the upswing, trade in the coveted flavor is out of balance.

Flavor companies are working feverishly to find additional sources of natural vanillin and launch initiatives to boost the quality and quantity of bean-derived vanilla. Suppliers such as Symrise, International Flavors & Fragrances (IFF), Solvay, and Borregaard are using their expertise along the full spectrum of natural to synthetic to help food makers arrive at the best vanilla flavor for each product.

Although consumer disdain for artificial ingredients has been building for years, credit —or blame—for last year’s wave of “all natural” announcements goes to Nestlé, which in February 2015 was the first major brand to announce plans to eliminate artificial additives from chocolate candy sold in the  U.S. The announcement upended the massmarket chocolate industry practice of adding synthetic vanillin to counter the bitterness of cocoa.

For a big food firm, however, switching to natural vanilla is akin to squeezing an elephant into a Volkswagen. While the ink was drying on those all-natural announcements last year, output of Madagascar vanilla beans had plummeted to 1,100 metric tons, about half the normal harvest. That, along with rising demand, caused prices to more than double to roughly $225 per kg by the middle of last year, according to Mintec, a raw material price-tracking firm.

Cured vanilla beans contain only 2% of extractable vanilla flavor, meaning prices for pure vanilla reached an eye-popping $11,000 per kg. The industry is closely watching this year’s harvest, hoping to see vanilla costs eventually return to pre-2012 levels of about $25 per kg for beans or $1,250 for vanilla.

The clear distinction that we can make is between the petroleum-based guaiacol and the other routes that all the others originate from living plants.

The distinction between the “natural” and the “synthetic” vanilla will follow the same rationale that I covered in the October 3, 2017 where I described the human attributions to climate change:

All the routes to the “natural” vanillin in Figure 2, except for the petroleum routes, originate from photosynthetic plants – within the plants’ lifetimes. The plants photosynthesize atmospheric carbon dioxide and have lifetimes considerably shorter than 5730 years (the half-life of carbon-14 that they digested from the atmosphere) so we expect the vanilla extracted through any of the “native” routes to have the same C-14 concentration as the atmosphere.

The petroleum route is based on petroleum that was formed via decay of plants and digestion by anaerobic (no oxygen) bacteria, millions of years ago. That’s a much longer time than the half-life of C-14. So we expect the vanilla that we get from this route to have no C-14. Measuring C-14 in the extract is a quick and easy job for laboratories that are equipped to do so.

A different method for the differentiation is based on additives that are present within “natural” vanilla and are absent in the synthetic vanilla. One of them is described below:

This method is more general and can use a wider variety of analytical instruments compared to the radioactivity measurements, provided that the assumed additives are present.

Next week I will return to the October 3, 2017 blog about attribution to solidify the analogy between vanilla and the anthropogenic origins of climate change.

1 Response to “Natural” or “Anthropogenic”? – Vanilla Extract and Climate Change