The 10 Plagues, Coronavirus, and Passover

Posted on March 17, 2020 by climatechangefork

The world is in a biologically-driven pandemic and trying to adjust to the coronavirus. I am obviously no exception. My university, like many others, has shifted all classes to online until the end of the semester. It’s given students and teachers a transition week to learn the technology. My granddaughter is now flying back home from Israel after spending two weeks in quarantine there.

Passover is approaching (beginning the evening of April 8th and ending on April 16th). I had originally planned to travel to Germany with my wife for the unveiling of a memorial for the liberation of the concentration camp that held my mother and me. We spent the last two years of WWII in Bergen-Belsen and were liberated by the American army 75 years ago. (You can type “Bergen-Belsen” into the search box to find my blogs that relate to the camp’s background or type “liberation” for more on how the American Army saved us). Following that trip, I had a commitment to speak at a yearly teen Holocaust symposium in Scranton, Pennsylvania. My wife and I have attended the symposium regularly over the last eight years. In August, depending on the situation, we are supposed to travel to Poland for the first publication of my mother’s book on our lives in Warsaw during the first half of WWII. While the book was originally written in Polish, it was never published in Poland.

Well, the trip to Germany is obviously off and we are going to spend Passover at home. Passover is a celebration of the Israelites’ (Jews’) journey, “from slavery to freedom” (it sounds more poetic in Hebrew because it consists of two words that rhyme). Essentially, the holiday’s whole theme is liberation. The unveiling of the monument to our liberation and the memorial to the liberation of the camp have been postponed until next year. The monument consists of a large stone, engraved on three of its sides with “Liberation – April 13, 1945,” in three languages: German, English, and Hebrew. In spite of fact that the unveiling was postponed, I will still focus the next series of blogs on the lessons that I planned to emphasize in those events.

Coming back to Passover, I—and likely everyone around me—am now relating more to the point of view of the Egyptians than that of the Israelites. We are all suffering from the plagues.

The book of Exodus in the Bible describes the story of Passover. The Egyptian pharaoh at the time was most likely Ramses II (1318-04 BCE). According to the biblical story, God forced the Egyptians to free the enslaved Israelites with the 10 Plagues, the list of which is shown in Figure 1. Each time the pharaoh refused, He sent another plague.

God’s message with each of the plagues is shown below for the second plague (frogs):

Then the Lord said to Moses, “Go to Pharaoh and say to him, ‘This is what the Lord says: Let my people go, so that they may worship me. 2If you refuse to let them go, I will send a plague of frogs on your whole country. 3The Nile will teem with frogs. They will come up into your palace and your bedroom and onto your bed, into the houses of your officials and on your people, and into your ovens and kneading troughs. 4The frogs will come up on you and your people and all your officials.’” 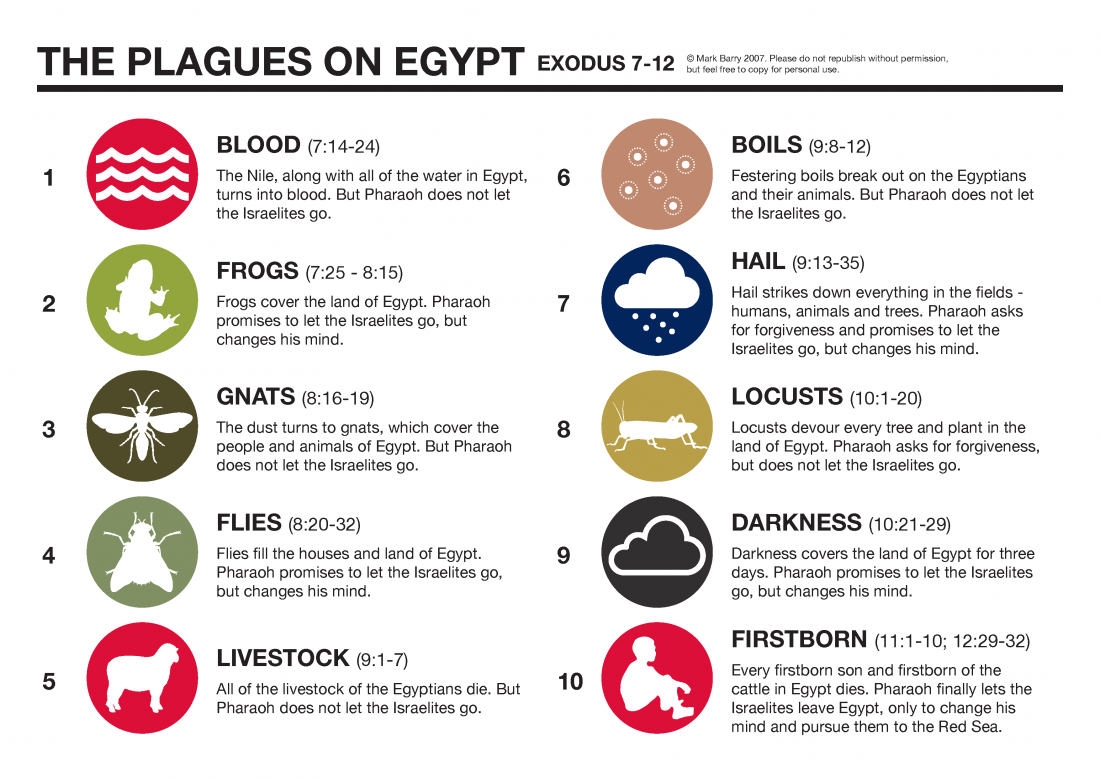 Modern analogies and scientific theories for all ten of the plagues abound. For instance, here’s an example of what some of the plagues might have actually entailed, starting with the river of blood:

Red Algae      This theory — put forth by scientists like John S. Marr, an epidemiologist who wrote a 1996 journal article featured in the New York Times — argues that red algae could have sucked oxygen out of Egypt’s waterways, killed the fish and turned the water red. Just as in the volcano theory, frogs then leapt out looking for food, and died. Without frogs to eat the insects, the pests proliferated and feasted on corpses, a feeding frenzy for flies and locusts. The paper argued that the lice could have been a type of insect called culicoides, which can carry two diseases that could explain the livestock deaths: African horse sickness and Bluetongue. The boils on humans could have been caused by glanders, an airborne bacterial disease spread by flies or tainted meat. In this theory the darkness is coincidentally caused by a sandstorm. The darkness would have left the crops — well, whatever crops were left after the other problems — moldy, and the mold could have produced airborne toxins that might explain widespread childhood death.

It’s not too far-fetched to imagine the original ten plagues, or even some new ones, in association with climate change. However, two stand out in terms of their resemblance to what we are experiencing now: locusts and death. There is an infestation of locusts in East Africa that is starting to penetrate into the Middle East, and there is the global pandemic of the coronavirus (COVID-19).

Figure 2 shows some of the locusts in East Africa and Figure 3 shows the global spread of the coronavirus. 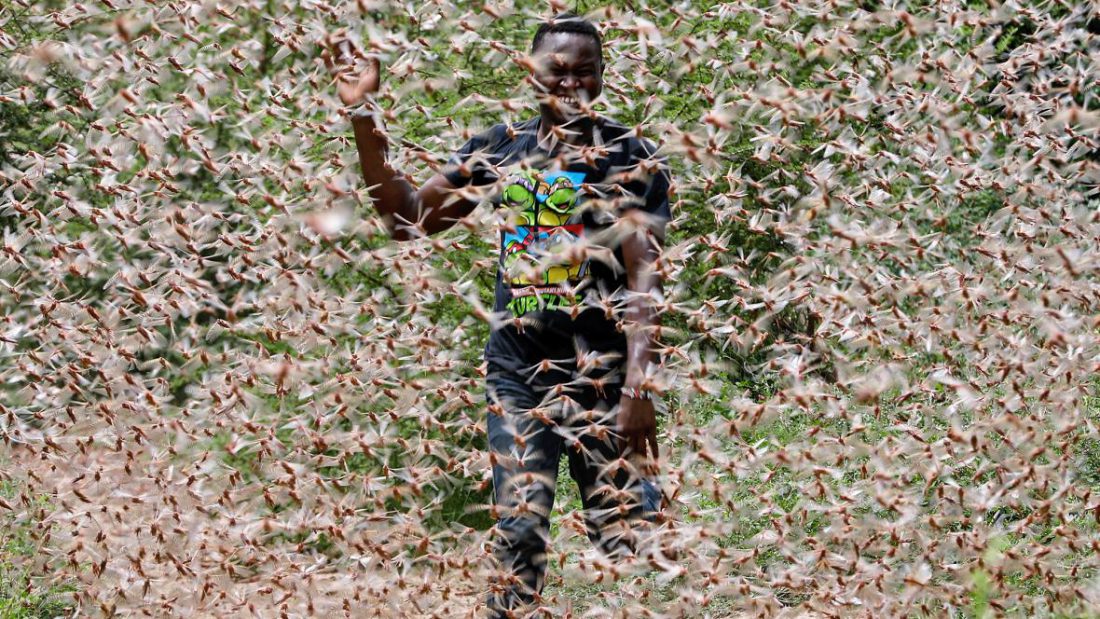 The map in Figure 3 was published on Friday, March 13th in the New York Post. As of today, according to the Johns Hopkins Coronavirus Resource Center, the total confirmed coronavirus cases stands at 190,126, with the death toll standing at 7.517. These numbers are obviously changing on a daily basis.

Unlike the pharaoh, we have modern science and an understanding of what is happening around us. However, many local governments are failing to produce or implement coherent global strategies to fight these plagues.

Meanwhile, wash your hands and keep safe, everyone!!

Micha Tomkiewicz, Ph.D., is a professor of physics in the Department of Physics, Brooklyn College, the City University of New York. He is also a professor of physics and chemistry in the School for Graduate Studies of the City University of New York. In addition, he is the founding-director of the Environmental Studies Program at Brooklyn College as well as director of the Electrochemistry Institute at that same institution.
View all posts by climatechangefork →
This entry was posted in Climate Change and tagged blood, coronavirus, COVID 19, Egypt, frogs, Germany, Health, History, Israelite, Jew, liberation, locusts, nile, pandemic, Passover, plague, Poland, quarantine, Science, social distancing. Bookmark the permalink.

3 Responses to The 10 Plagues, Coronavirus, and Passover