We Stand Together (Separately)

Posted on March 24, 2020 by climatechangefork

January 27th, the first day of classes at Brooklyn College, also happened to be International Holocaust Remembrance Day. It was also near the start of the COVID-19 epidemic in the United States—a few days after the first positive diagnosis outside of China and three days before the WHO (World Health Organization) declared a global health emergency (shortly followed by the organization reclassifying it as a global pandemic).

Below, I am trying to answer a question from Michelle Anderson, the president of Brooklyn College, during my talk that day: “When the Past Writes the Present: From Holocaust Survival to Climate Change.” It was part of President Anderson’s “We Stand Against Hate” series at Brooklyn College. 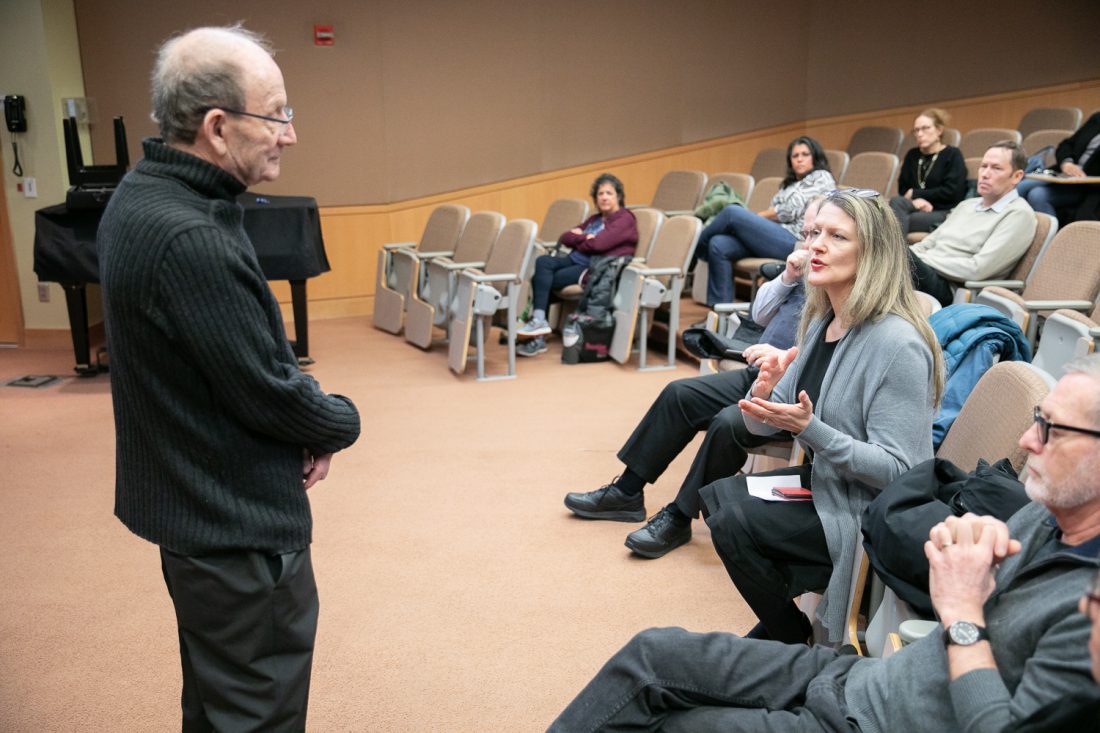 Q&A with Michelle Anderson after my talk

Two of my blogs following the event (February 4 and 11, 2020) addressed issues that we discussed during the Q&A segment of the talk and some of the ensuing correspondence.

By now, I have a pretty standard talk for such occasions. I speak about my family’s experiences during WWII and the connection that I draw between the Holocaust and the present threat of climate change (i.e. the general theme of this blog). While I have taught at BC for more than 40 years, most of the audience was not aware of my history.

At the time, I was scheduled to travel and speak at three other related events. April 15th in Farsleben, Germany, was to be the unveiling of the monument to the 75th anniversary of the British army’s liberation of Bergen-Belsen. My mother and I were imprisoned in that concentration camp for two years and were rescued by the American army near Farsleben. Shortly afterwards I was due in Scranton, Pennsylvania to take part in an annual Teen Symposium on the Holocaust that I have attended for the last eight years. In August, I was supposed to go to Poland for the publication of my mother’s book, Of Bombs and Mice. My mother wrote the book in Polish but for a variety of reasons it was never published there.

This itinerary called for a lot of traveling and a lot of Holocaust. Then the pandemic came.

Like most of the world, I am currently stuck in my apartment, trying to convert all of my teaching to online platforms. I’m also having to move the rest of my activities online or cancel them altogether. It is not surprising that the unveiling of the monument and the Bergen-Belsen commemoration have been postponed until next year. The Scranton symposium is still scheduled but I am doubtful that it will take place. The Warsaw event is five months away but nobody has a reliable prediction as to when the threat will disappear. This certainly requires some changes in thinking.

It took me until 1990 (the unification of Germany) to break my personal boycott of Germany. I had avoided traveling there. I sidestepped the country in large part to avoid the many apologies from younger generations who wanted to speak on behalf of the German people as a whole in denouncing the atrocities. After the unification of Germany, however, I realized that my attitude was not productive; that it stemmed from hate. I gave it a second thought, started to travel to Germany more often, and made good friends there. Only very recently have I started to realize that even just talking about my family’s Holocaust history brings out hate. There are obvious good guys and bad guys in such stories but the remedy is not to ignore this history. Instead, we must try to contrast the past with the present and stand against hate. While many of those in government are descendants of those who hatefully killed much of my family, most of them are now trying to prevent recurrence of an atmosphere that encourages such crimes. The Christian religion’s command, “Bless those who persecute you” (Romans 12:14) likely plays a part here.

I am Jewish and our current (and continuing) refrain is, “Never again.” But here my sentiment is a bit different. I am not looking to bless those who murdered my family. Rather, I want to bless anyone trying to prevent a future genocide in whatever form it takes.

The photos below show the construction of the monument in Germany – a large granite stone that will be engraved on three sides with “Liberation April 13, 1945” in three languages: German, English, and Hebrew. The fourth side will show the emblem of the American army’s 30th Infantry Division, which saved us in Farsleben on April 13, 1945. 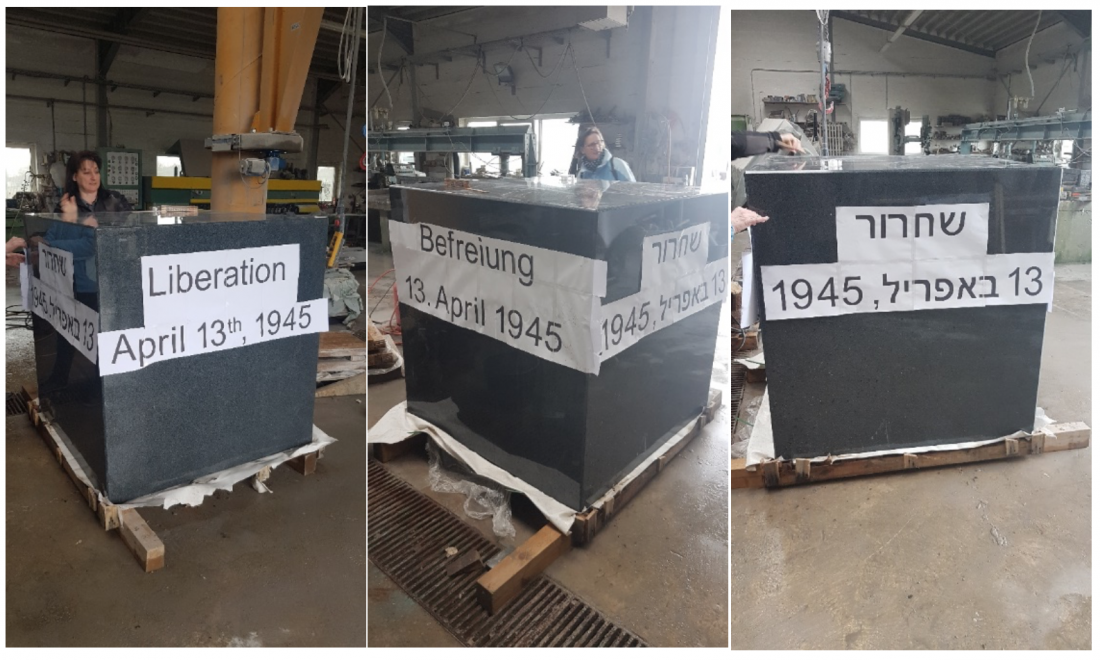 Construction of the monument in Farsleben, Germany 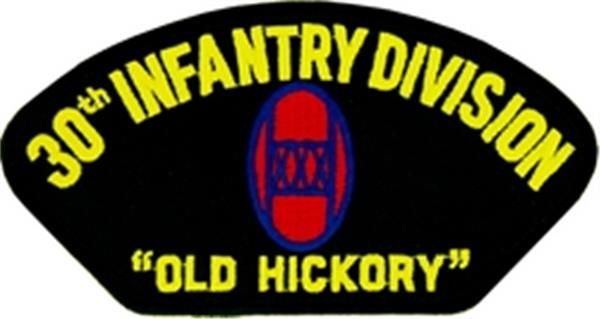 The emblem of the American 30th Infantry Division

My German friends that live and work near Farlsleben, the site of our liberation, are the ones who constructed the monument. Most of them live in small suburbs of the city of Magdeburg. They include the teachers, students, and staff of the Krfurst-Joachim-Friedrich-Gymnasium in Wolmitstedt and my dear friend Anette Pilz, the Director of the Museum Wolmirstedt. I described my most recent visit to the area in my September 2019 blogs.

Almost every decision during the construction and preparation involved consultation with  myself (first generation, now living in the US), Michal Elbaum (second generation, now in Israel), and Ron Chaulet, an amateur historian from the Netherlands who came up with the original idea for the monument. The event’s postponement was a great disappointment to us all. We hope to be able to participate in the 2021 unveiling. I also hope to be able to visit the place earlier.

Back to the pandemic: many people who are required to isolate themselves from others and cannot move their work to online forums find themselves bored. This includes the Israeli actress Gal Gadot. She tried to follow in the footsteps of self-quarantined Italians who stood on their balconies and sang to their neighbors. Gadot tapped some of her famous friends to join in (from home) with her in singing John Lennon’s “Imagine.”

I found it appropriate to finish this blog with the full lyrics to the song. We’re all in this together, even if we’re separate. Stay safe, everyone!

Imagine there’s no countries
It isn’t hard to do
Nothing to kill or die for
And no religion, too
Imagine all the people
Living life in peace… You…

Micha Tomkiewicz, Ph.D., is a professor of physics in the Department of Physics, Brooklyn College, the City University of New York. He is also a professor of physics and chemistry in the School for Graduate Studies of the City University of New York. In addition, he is the founding-director of the Environmental Studies Program at Brooklyn College as well as director of the Electrochemistry Institute at that same institution.
View all posts by climatechangefork →
This entry was posted in Holocaust and tagged 30th division, Brooklyn College, China, coronavirus, COVID 19, CUNY, epidemic, Farsleben, Gal Gadot, Germany, History, Holocaust, imagine, Jew, Jewish, John Lennon, liberation, Magdeburg, pandemic, Poland, Scranton, teen symposium, US, WHO, WWII. Bookmark the permalink.