Posted on November 17, 2020 by climatechangefork

I addressed some of these issues around the time that the newly-elected President Trump took us out of the Paris Accord in 2017. President Trump justified the withdrawal with his “America First” argument.

Aside from that small discrepancy from reality, the speech was an astronomical declaration that the US is an isolated planet unaffected by anything that happens around it. Strangely, there was not a word in the speech about the future. Last week’s blog focused on the conflict between globalism and nationalism. I wrote there that “me” and “them” are very well defined. “We” includes me but needs an additional description of the collective that is being referring to. I am especially interested in where we position our family members and friends on this spectrum. In my book (Climate Change: The Fork at the End of Now), I defined “Now” in terms of the expected life span of my grandchildren, which approximately brings me to the end of the century.

On Tuesday, November 3, 2020, the American people voted President Trump out and elected VP Biden as our next president. Nevertheless, the following day, our withdrawal from the Paris accord became final.

I was reminded of the us vs. them issue when I read an Op-Ed in The New York Times that tried to explain why—in spite of his many policies blocking immigration—Latino voters didn’t overwhelmingly vote against President Trump:

“Some Latinos Voted for Trump. Get Over It: I’m Latina. I still don’t know what that means.
By Isvett Verde”

Many people were surprised, but they shouldn’t be. In 1984, 37 percent of Latinos voted for Ronald Reagan; 40 percent voted for George W. Bush in 2004. It would be easy to dismiss these voters as self hating, or racists. But that’s a simplistic way of viewing this wildly diverse and complex demographic.

The reason the “Latino vote” befuddles is because it doesn’t exist, nor do “Latino issues.” If we want to understand how Latinos vote, we should start by retiring the word “Latino” entirely — and maybe “Hispanic,” too, a term first used by the United States government in the 1970 census that is based solely on the language native to the European settlers who conquered the Americas. These labels have served only to reduce us to a two-dimensional caricature: poor brown immigrants who always vote Democrat.

Latinos, like all Americans, are motivated by the issues that affect them directly. Those can vary depending on factors like our religion, where we grew up, whether we are first generation or our ancestors lived in North America long before the United States existed. Many Democrats act as if Latinos care only about immigration policy. In fact, a recent survey by UnidosUS, an advocacy group, and Latino Decisions, a polling and research firm, found that Latinos are more concerned about jobs and the economy.

Her main argument was that Latinos are not a monolith. They don’t all vote in one bloc or have the same priorities. In other words, as with non-Latinos, “us” can mean a lot of different things.

Last year, in its “Learning Network” section, The New York Times, reprinted 24 figures from earlier articles in order to illustrate some of the many aspects of climate change. I find the following figure especially relevant here as it demonstrates another separation of “me vs. them.” It compares the distribution of people who think that climate change will directly harm Americans with those who think it will affect them personally: 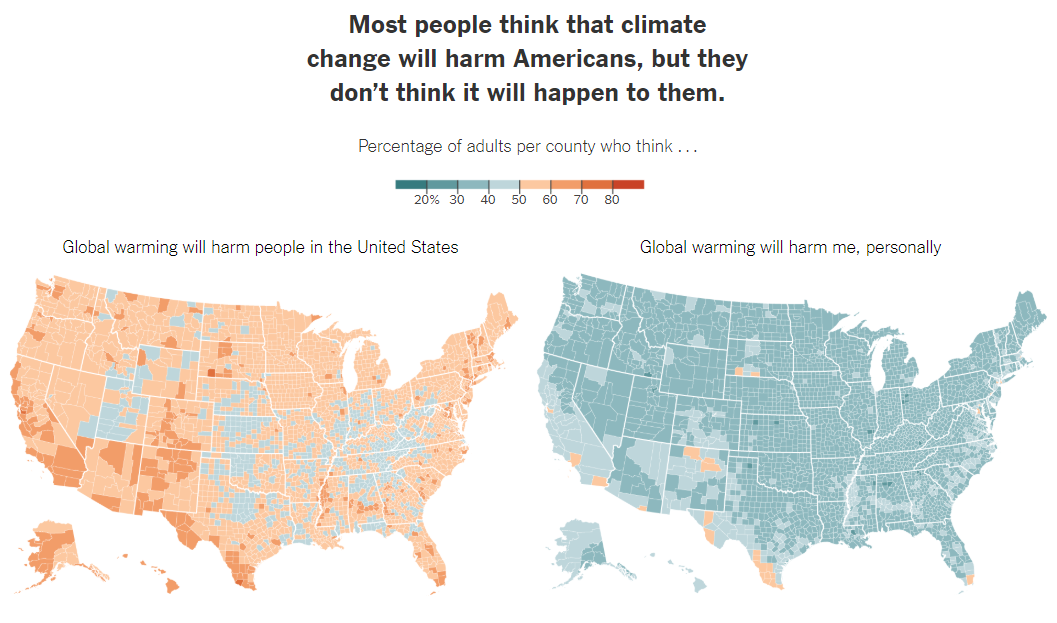 This figure is based on an older article that cites a 2016 Yale survey. Here is the data on risk perception:

Almost 60% of Americans think that climate change will harm people within the US (them) but that number drops significantly when participants are asked if they would personally be affected (me). 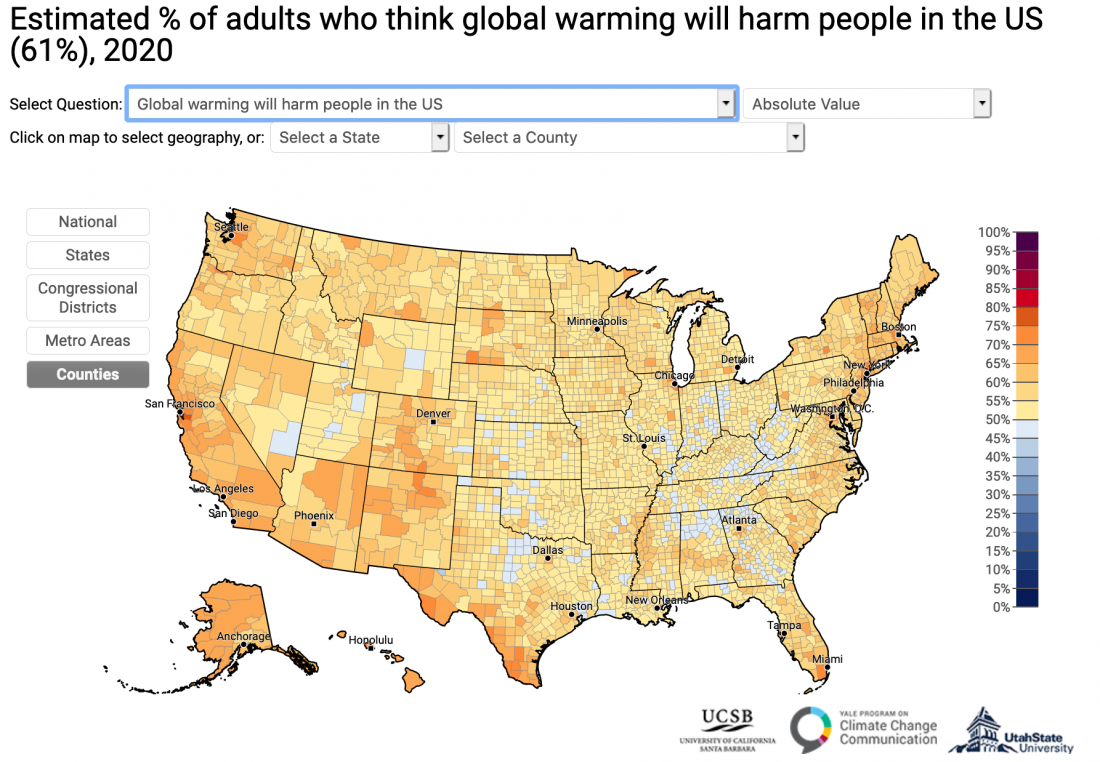 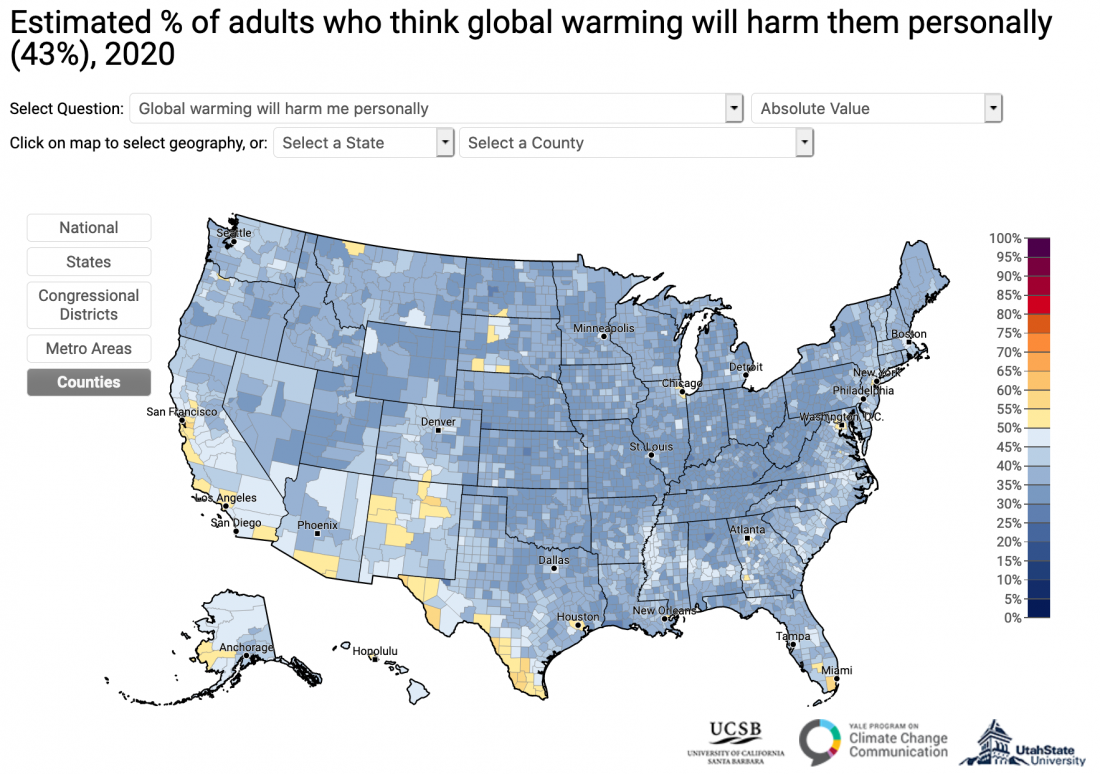 What can we do about the imbalance between the “me,” “they,” and “us”? This is an issue that I have grappled with for most of my academic career. I am giving my students an end-of-semester assignment to compile similar data that reflects their own perspectives on the balance between “me vs. them.”

Next week I will finish my set of “Teaching Moments” blogs by going back to the drafting of the American Constitution. I’ll look at how the Founding Fathers attempted to balance power between the territories (e.g. states) and individuals in selecting the US government.

Micha Tomkiewicz, Ph.D., is a professor of physics in the Department of Physics, Brooklyn College, the City University of New York. He is also a professor of physics and chemistry in the School for Graduate Studies of the City University of New York. In addition, he is the founding-director of the Environmental Studies Program at Brooklyn College as well as director of the Electrochemistry Institute at that same institution.
View all posts by climatechangefork →
This entry was posted in administration, Climate Change, Education, Election, politics, Trump, US and tagged America, Biden, Climate Change, climate change denier, Climate Change Deniers, Democrat, Donald Trump, Future, Global Warming, harm, hispanic, Joe Biden, latina, latino, map, me, president trump, Republican, survey, them, Trump, US, vote, voter. Bookmark the permalink.

1 Response to Teaching Moment 2: How Do we Vote?