Teaching Moment 3: The Electoral College & Whose Vote Counts Most?

Posted on November 24, 2020 by climatechangefork

As of last Friday (November 20th) the election results were as follows:

The turnout for this election is estimated at 66% of registered voters (compared to 60% in 2016), for a total near 160 million votes. Of the five closest battleground states (Arizona, Georgia, North Carolina, Pennsylvania, and Wisconsin), President Trump won only the North Carolina vote. If he had been able to carry Pennsylvania and Georgia, the electoral college votes would have tied at 270 for each candidate. The decision might then have moved to Congress, with a good chance that the body would have granted President Trump a second term. If he had won all five of the states (a 50,000-vote difference from his final outcome) he would have been elected with an easy majority in the electoral college. And yet, such a small shift of 50,000 out of 6 million (0.8%) would hardly have made a dent in Biden’s lead in the popular vote. That’s not far from what happened in 2016.

President Trump has yet to concede and is trying every trick in the book to stay in office. Between 50-80% of his 70 million supporters (depending on the source) believe that the only fair election result would be one in which he won. Several key states are supposed to submit their official counts today, so hopefully the situation will look a bit clearer soon.

It is hardly a surprise that the significant difference between popular and electoral vote distribution gave rise to an outcry that US elections are undemocratic. The electoral college gives significantly more power to certain states, overshadowing the will of the people as a whole. Similar outcries arose after both the 2000 and 2016 elections. While the Democratic candidate won the popular vote by a wide margin in all three cases, in the first two elections they lost in the electoral college by a very small margin. Many have called for the abolition of the electoral college and advocated for a direct popular presidential election. The New York Times ran an Op-Ed piece, “2020 Shows why the Electoral College Is Stupid and Immoral”

This is a great opportunity to dive into the intricacies of the American voting system to try to understand what can go wrong.

The US Constitution established the separation of power between the three branches of government: the executive, the legislative, and the judicial. It likewise aimed to balance between stability and freedom by weighing the federal government against the power of the states. The Senate and the House of Representatives mirror that juxtaposition. Each state has its own constitution, which lays out a similar balance.

“Each State shall appoint, in such Manner as the Legislature thereof may direct, a Number of Electors, equal to the whole Number of Senators and Representatives to which the State may be entitled in the Congress; but no Senator or Representative, or person holding an Office of Trust or Profit under the United States shall be appointed an Elector.

The Congress may determine the Time of chusing the Electors, and the Day on which they shall give their Votes; which Day shall be the same throughout the United States.”

Yes, it is spelled, “chusing” in the American Constitution. What else could they have gotten wrong? 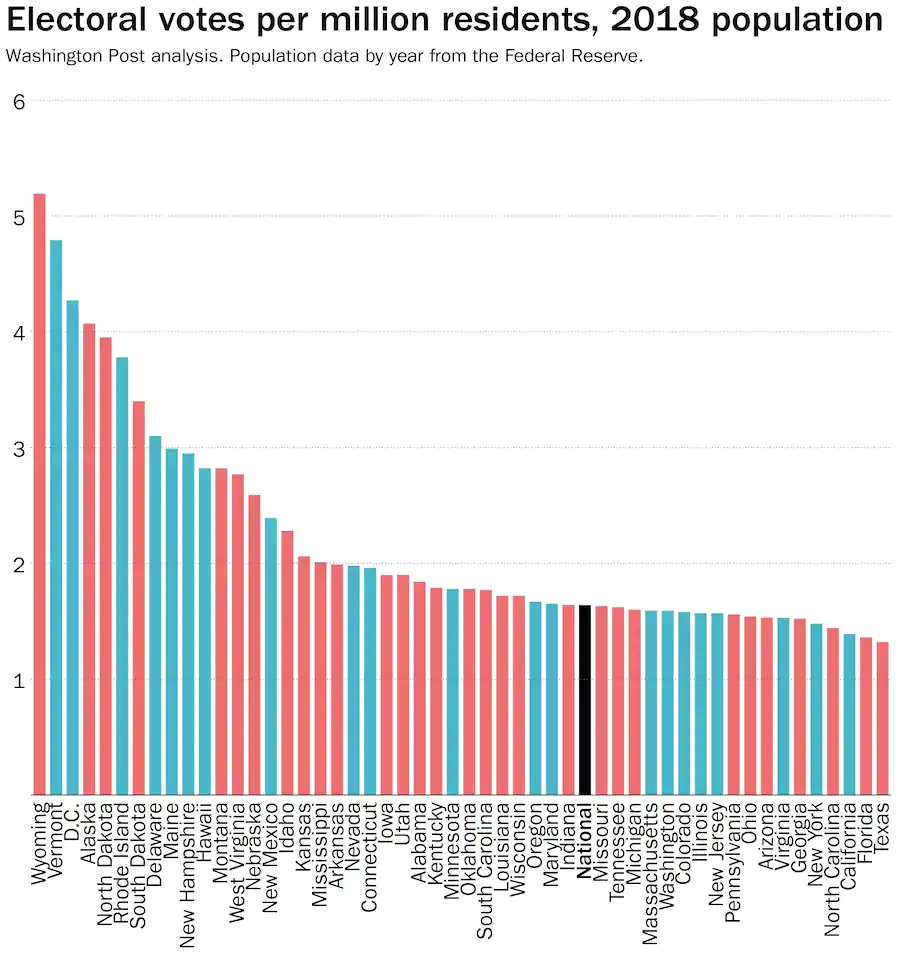 The Op-Ed that called the electoral college “stupid and immoral” didn’t object to the existence of the electoral college itself. Instead, it took issue with the Constitutional mandate of how to employ it, as stated in the start of the first sentence of the 2nd clause, “Each State shall appoint, in such Manner as the Legislature thereof may direct…” President Trump is trying to mobilize Republican legislators in states where VP-Biden won the election to appoint electors who will support him, regardless of the popular vote. The American Constitution doesn’t go into what are called “faithless electors” but the act seems neither likely nor particularly effective:

There is no Constitutional provision or Federal law that requires electors to vote according to the results of the popular vote in their States. Some States, however, require electors to cast their votes according to the popular vote. These pledges fall into two categories—electors bound by State law and those bound by pledges to political parties.

The U.S. Supreme Court has held that the Constitution does not require that electors be completely free to act as they choose and therefore, political parties may extract pledges from electors to vote for the parties’ nominees. Some State laws provide that so-called “faithless electors” may be subject to fines or may be disqualified for casting an invalid vote and be replaced by a substitute elector. The Supreme Court decided (in 2020) that States can enact requirements on how electors vote. No elector has ever been prosecuted for failing to vote as pledged. However, several electors were disqualified and replaced, and others fined, in 2016 for failing to vote as pledged.

It is rare for electors to disregard the popular vote by casting their electoral vote for someone other than their party’s candidate. Electors generally hold a leadership position in their party or were chosen to recognize years of loyal service to the party. Throughout our history as a nation, more than 99 percent of electors have voted as pledged.

Another often-heard objection to the present implementation of the electoral college has to do with the “winner take all” mandate. With the exception of Main and Nebraska, all of the states require that the entirety of their electoral votes go to the winner of the popular vote, irrespective of the size of the win. This is not a Constitutional mandate so it could be changed relatively easily (compared to creating an amendment), thus addressing one of the root causes of the imbalances between the electoral college and popular votes.

The heart of American political polarization is in the urban-rural distribution. I have discussed this in earlier blogs (see December 6 and 13, 2016). Nor is this opposition peculiar to the United States; it’s common among many countries with free and fair elections. However, it is hard to determine the exact data because we do not have specific enough information on the different demographics. For instance, not only is there no category for suburbs in the census but the composition of said suburbs varies as a function of their distance from cities. And yet, this polarization can determine the results of election. Cities are political more than physical constructs. That’s one of the reasons that demographic records often refer to metropolitan areas which can be defined differently by different sources. An alternative way to map this polarization is through population density. Figure 2 shows such an example from the 2012 elections and both Harvard’s Joint Center for Housing Studies and Bloomberg have explored the concept of population density as it relates to the popular definitions of rural, urban, and suburban. 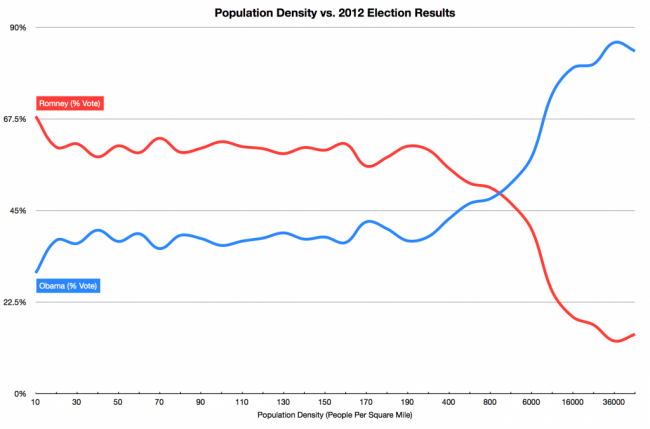 Figure 2 – Vote vs population density in the 2012 election

Looking back at Figure 1, let’s take Texas as an example: Between 2000 and 2019 the population of Texas grew from 20 to 29 million, a growth of 45%. At the same time, the population of the United States grew 19% from 280 to 332 million. So relative to the US, the Texas population grew by more than a factor of 2 (2.4). Figure 1 tells us that Texas has one elector for every 1.4 million people. Alaska, meanwhile, has 4 electors per million people. This means that someone who moves from Alaska to Texas—because of better job opportunities, better climate or any other reason–gives up considerable leverage in structuring the federal government.

The Framers of the Constitution had the foresight, at the end of the 18th Century, to understand the necessity of balancing the regional (state) and popular interests to preserve the federal nature of the government. We have some kinks in how we have realized its implementation. The Founding Fathers had no way to foresee the rise of President Trump. It’s up to all of us to take care of the issues that have cropped up since the Constitution was first signed.

Micha Tomkiewicz, Ph.D., is a professor of physics in the Department of Physics, Brooklyn College, the City University of New York. He is also a professor of physics and chemistry in the School for Graduate Studies of the City University of New York. In addition, he is the founding-director of the Environmental Studies Program at Brooklyn College as well as director of the Electrochemistry Institute at that same institution.
View all posts by climatechangefork →
This entry was posted in Election, law, US and tagged Arizona, Biden, city, constitution, Democrat, Donald Trump, Election, elector, electoral college, faithless elector, Georgia, Government, Joe Biden, legislature, mandate, mpopulation density, North Carolina, Obama, Pennsylvania, polarization, popular vote, Population Density, president trump, Republican, Romney, rural, suburban, Trump, urban, US, vote, voter, Wisconsin. Bookmark the permalink.

3 Responses to Teaching Moment 3: The Electoral College & Whose Vote Counts Most?