Posted on December 1, 2020 by climatechangefork

Welcome readers! This week’s guest blog is from Jacob Kinnaman and Frank Huang. Together, we hope to spread awareness about the correlation between climate change-induced migrations and the national security threats that they create. Although many people may view national security threats solely in terms of invasion or interference from a foreign country, other elements play a part. Extreme weather events caused by climate change have an extensive impact, both nationally and internationally.

In this blog we will be going through some statistics about wildfires in California and Mexico specifically. California experiences the most wildfires during the summer seasons. Mexico’s wildfires, while they can occur at any time throughout the year, are most intense from January to May, emitting over 1,000,000 tons CO2/per month. Both California and Mexico suffer greatly from wildfire damages, losing millions of acres of land every year.

2020 has been a year like no other. Among other disasters, massive wildfires swept the west coast of North America, leading us to examine the effects of climate change—not only right now but in the future. 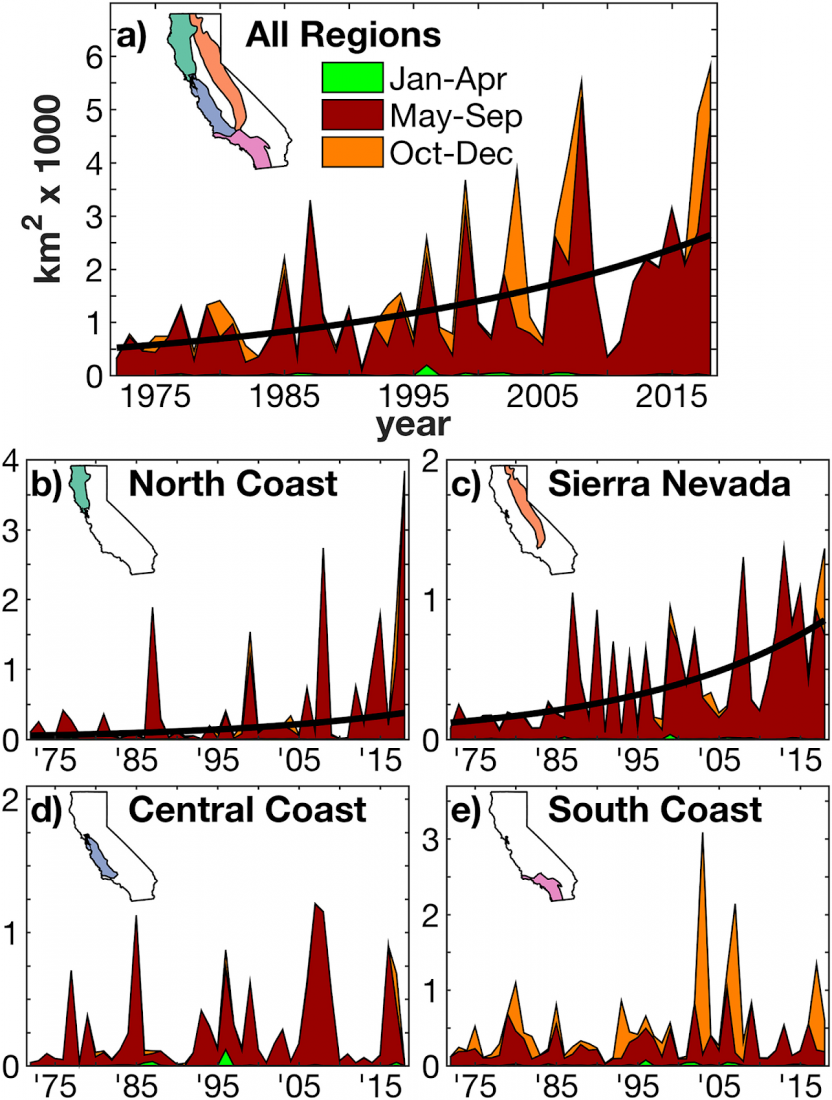 The graphs above show the seasonal and annual burned areas in California from 1972-2018. There have been 39,556 California wildfires recorded during that time. The burn area has increased during the last 50 years.

The cost of fire suppression also leapt substantially in the last decade. 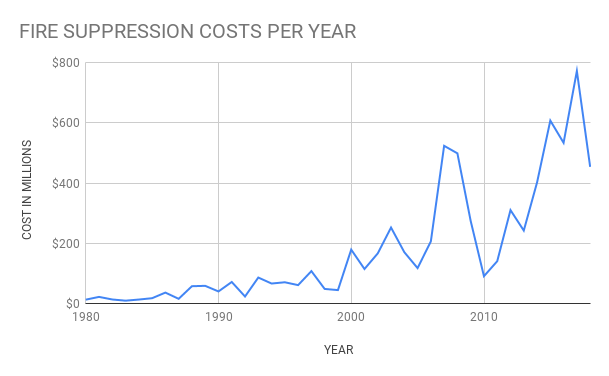 Wildfires are burning more acres of land each year. 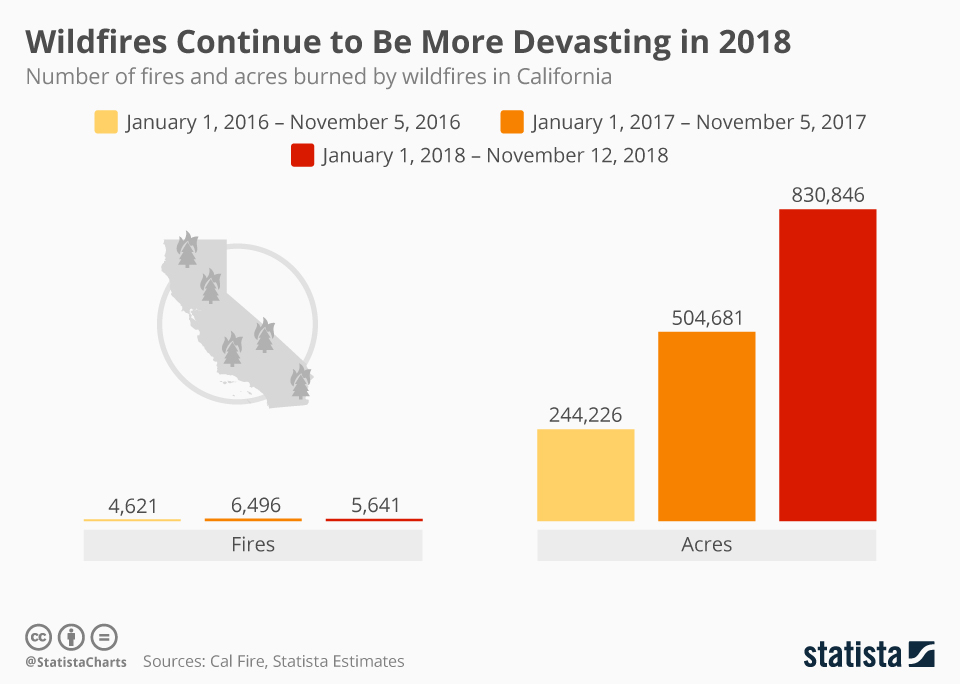 Human-induced warming plays a major role in the growth of wildfires in the last few decades. The increased forest fires are strongly tied to “increased atmospheric aridity caused by warming” (Williams, 2019). The increasing global temperature significantly increased the atmospheric vapor pressure deficit (VPD). Experts believe that the increasing appearance of wildfires is undeniably related to the rising VPD. The temperature is predicted to rise by 1.4 degrees Celsius by 2050.

Like the United States, Mexico deals with wildfire problems. Its wildfires differ in that they can occur any time of the year, though they are most likely from January through May. “The impact of these forest fires is an average emission of 1,000,000 tons CO2/per month during the fire risk period in tropical zones” (Dominguez & Rodríguez Trejo,1998). This table shows the amount of land being burned in hectares (~ 2.47 acres): 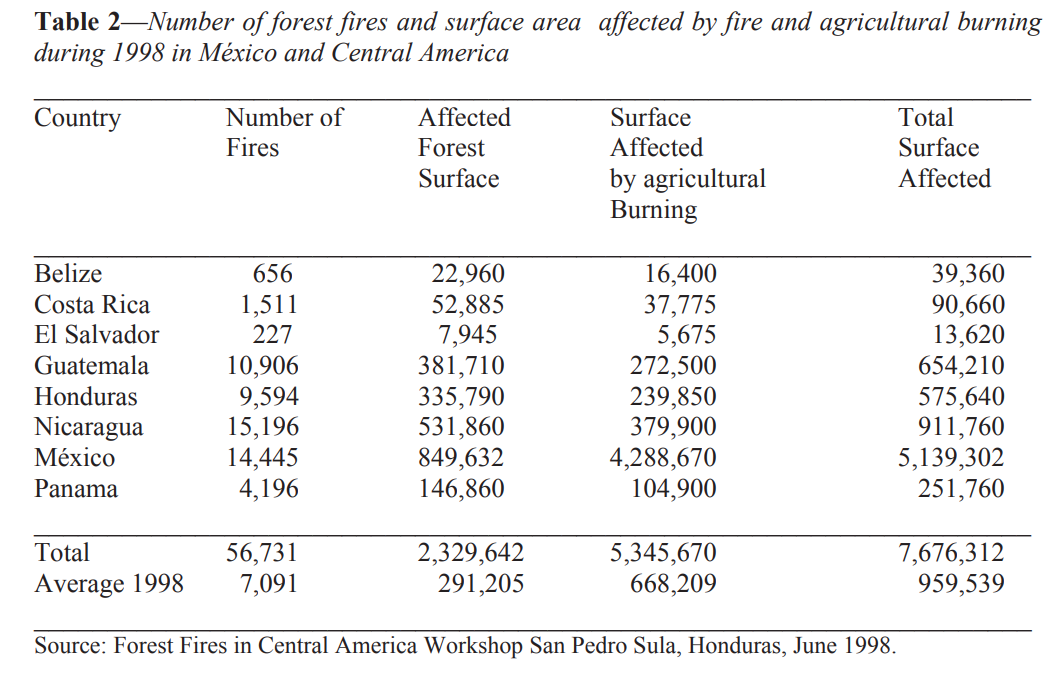 Clearly, within the Central American region, Mexico is the most affected by fires, with the highest total of 5.14 million hectares burned in 1998. Also in 1998, “56,731 fires registered over 2,330,000 ha (41 ha/per fire), that is, the equivalent of 3 percent of forest surface and a surface area 2.25 times greater than the average annual deforestation rate for the zone” (Dominguez & Rodríguez Trejo, 1998).

We can interpret from these data that the numbers continue to grow each year. It doesn’t help that Mexico, specifically northern Mexico, is prone to droughts. Much like California, the region has seen less and less rainfall as the years pass. “The period after 1994 coincides with a historically rare period of drought in much of Mexico that is comparable to the great Mexican drought of the 1950s” (Feng et al., 2010).

Conditions like this are key drivers in Mexico for climatic migration, both internally and externally. Since Mexico has a large rural population that relies on agriculture for a living, these extreme fires and droughts force people from the northern region to find new places to live. Most people migrate to the urban areas where adapting to climate change is easier. A study performed in 2003 demonstrated that rainfall is an important driver of emigration from Mexico to the US. As rain-fed agriculture is the major occupation in communities of Mexican origin, below-average rainfall in Mexico increases out-migration (Berlemann & Steinhardt, 2017). 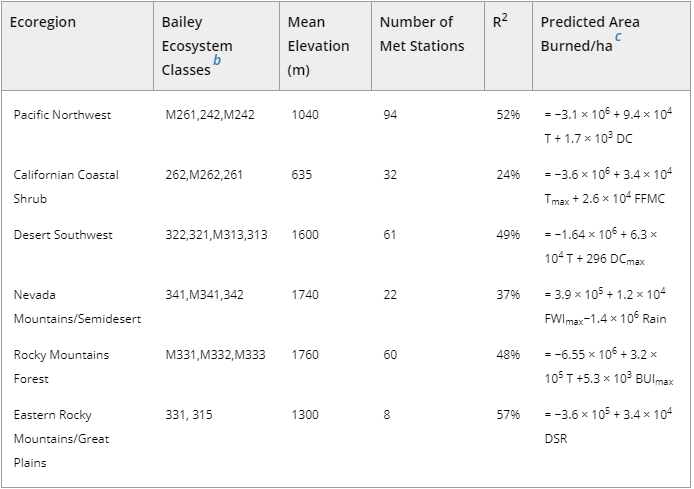 This table shows wildfire area burned regressions for aggregated ecoregions in the western United States according to four meteorological variables:

Scientists then calculated the daily value of each meteorological variable for each ecoregion from 1980-2004. The calculated data was input into the Canadian FWI System to predict future wildfire severity or the rate of fire spread. A schematic of this system is shown below: 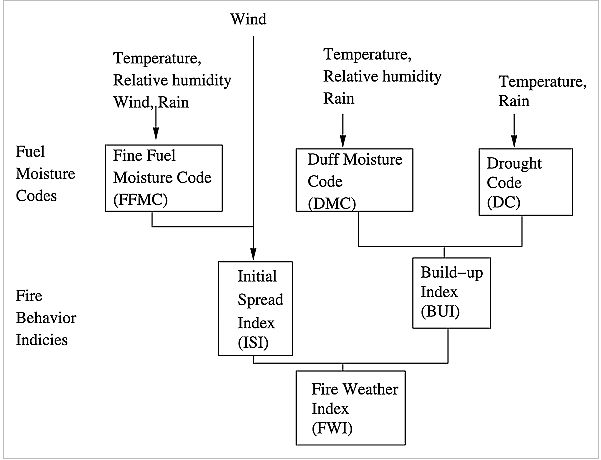 The Build-up Index (BUI): Indicates the availability of fuel for consumption by combining DMC and DC

Fire Weather Index (FWI): Combining ISI and BUI, this index is used as a general index of fire danger

Predicting what will happen in the future is key to understanding what we can expect and how we can prepare for the greater threat that climate change poses to our globe. As desertification, wildfires, and rising sea levels continue to occur throughout Mexico, climate migration will become more apparent. Mexico City, as well as other major cities, will be a hotspot of future climate in-migration; the arid north as well as rain-fed croplands and low-lying southern coastal areas will be large out-migration sources (Rigaud et al., 2018). 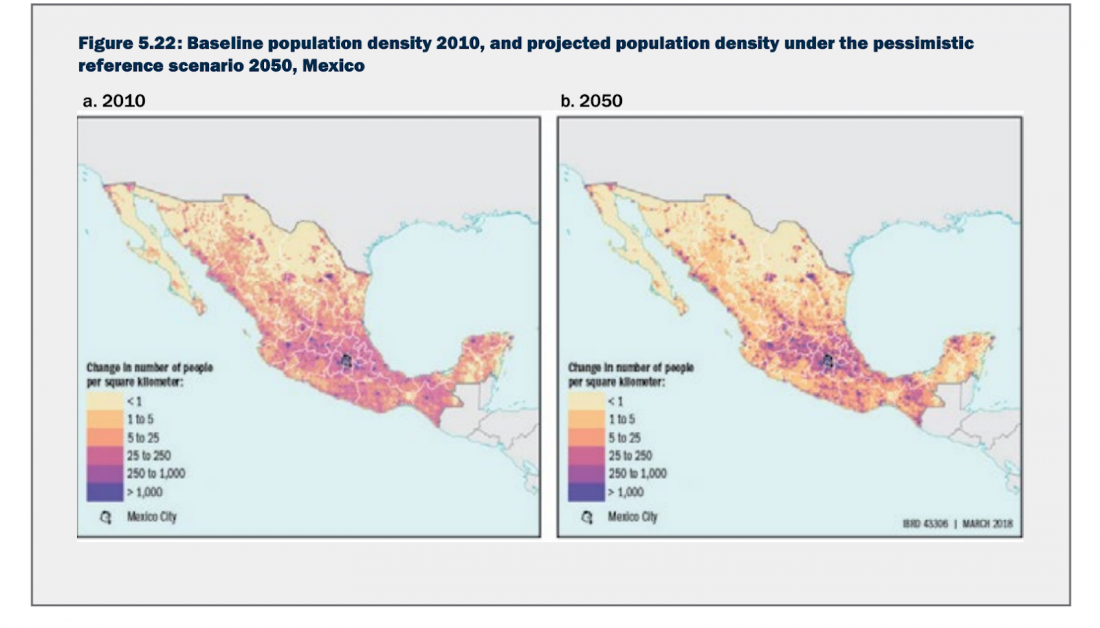 We can see the change in color of the northwestern and coastal parts of Mexico, as population density is set to decrease in these areas by 2050. Notice how much darker the area in and around Mexico City becomes with increased internal migration to this urban area. The spatial extent of urban areas is projected to grow by 2050. Growth in urban areas is projected to rise from 90 million people in 2010 to about 140 million people in 2050.

This table depicts the number of expected migrants in Mexico by 2050 under three different climate change scenarios. It shows at most 2.27% of the total population will become climate migrants by 2050. This number is only for internal migrants, not counting the emigrating population. To combat this massive displacement, we need to focus on preventing and tackling climate change now and not 20 years from now.

Scientists have concluded that wildfire-burned areas will likely increase by 57% in Western United States by 2050 (Williams, 2019). Climate change-induced natural disasters will likely get more severe as time goes on. Frequent storms, hurricanes, heat waves, and wildfires will eventually displace many residents. Climate change was officially deemed a national threat in 2005 when Hurricane Katrina struck New Orleans (Busby, 2007). The hurricane destroyed the majority of the city and caused over $80 billion in damages, killed nearly 2,000 people, and relocated more than 270,000 residents. Over 70,000 US soldiers were mobilized.

Scientists predict that the severe weather events caused by climate change could pose a national security risk by damaging military bases, killing a large population of people, and displacing residents.

Migration patterns will change across ecosystems when facing climate change impacts alongside other stressors such as deforestation, land degradation, and loss of biodiversity. Unmanaged and unexpected climate-related migration could exacerbate a range of problems, including deterioration of ecosystems, slowing of regional economic development, disruption of human and political rights, and increased international conflicts and border fortification” (Feng et al., 2010).

Increased international migration can also cause mass displacement within the US and other countries that must deal with climate refugees. The increase of people can also bring terrorist threats and trigger conflict among the American people and their government. Economic aspects such as housing markets and cost of living will be greatly affected as well.

Through the analysis of this data we can conclude that without further intervention and new protocols to better combat climate change, the threat of wildfires in the US and Mexico will undoubtedly increase as Earth’s global temperature rises. As fires continue with greater abundance and strength with each passing year, they will continue to run rampant, destroying millions of acres of residential and farming property. This only perpetuates a driving force in both external and internal migration in both Mexico and the US. This year we saw uncontrollable fires across the western coast of North America. Without the proper laws and guidelines to mitigate this climate change, similar fires driven by strong winds and fueled by decaying land will continue to blaze our continent.

One of many ways to correct this path from becoming our future starts with government intervention. Lawmakers need to take action and take this matter seriously. They must increase the funding for the local and state fire departments and forest clean-up programs that can prevent the start of these natural disasters. This can combat a large shift in migration populations in our future. Additional changes in farming practices would allow farmers to be more resilient to adverse climatic conditions, making them better able to supply populations dependent on local food supply. The estimated effect of food supply on migration may become smaller as well, as globalization connects our world more than ever before.