The Role of Oil Companies in the Energy Transition

In last week’s blog, I included a citation from Nicholas Kusnetz’s article, “What Does Net Zero Emissions Mean for Big Oil?” which pointed out:

Most glaring is that none of the companies has committed to cut its oil and gas output over the next decade, the simplest and most reliable way—one might say the only way—to cut emissions, and a must if the world is to avoid dangerous warming … They rely instead either partly or largely on capturing or canceling out these emissions with unproven technologies and reforestation at a questionable scale.

Is Mr. Kusnetz right? The underlying question here is a remnant of an ongoing dilemma in environmental movements: can we find less damaging alternatives to our current modes of working or should we just go “back to the cave”? This dilemma is described in the IPAT identity (See June 29, 2016 blog) in the form of

For climate change triggered by fossil fuels, the impact is the yearly emissions of carbon dioxide, the affluence is the GDP/capita, and the technology is equal to the product of three terms: energy intensity of GDP (energy/GDP), fossil intensity of energy (fossil/energy), and carbon intensity of fossil (carbon/fossil).

According to Mr. Kusnetz, the oil companies’ commitments to net-zero carbon emissions resemble the reasoning of putting bioenergy (burning of shrubs and wood) into the sustainable category: they produce carbon dioxide when we burn them, but they sequester carbon dioxide when they grow—usually within a short time (yearly for annuals and roughly the length of a human generation for many of the trees). For plants, this is the only life cycle. In this and subsequent blogs, we will try to explore if this is really the only “net-zero” life cycle available for the oil companies.

When we follow the practice of oil companies selling oil field properties, it is easy to find horror stories that we certainly want to avoid.

Before the signing of the Paris agreement toward the end of 2015, the IPCC issued a report on the scenarios that could allow the world to limit climate change to 1.5oC warming by mid-century. Figure 1, taken from that IPCC report, summarizes the global energy transition that is required by pathways (top figure/panel a) and fuel type (bottom figure/panel b). 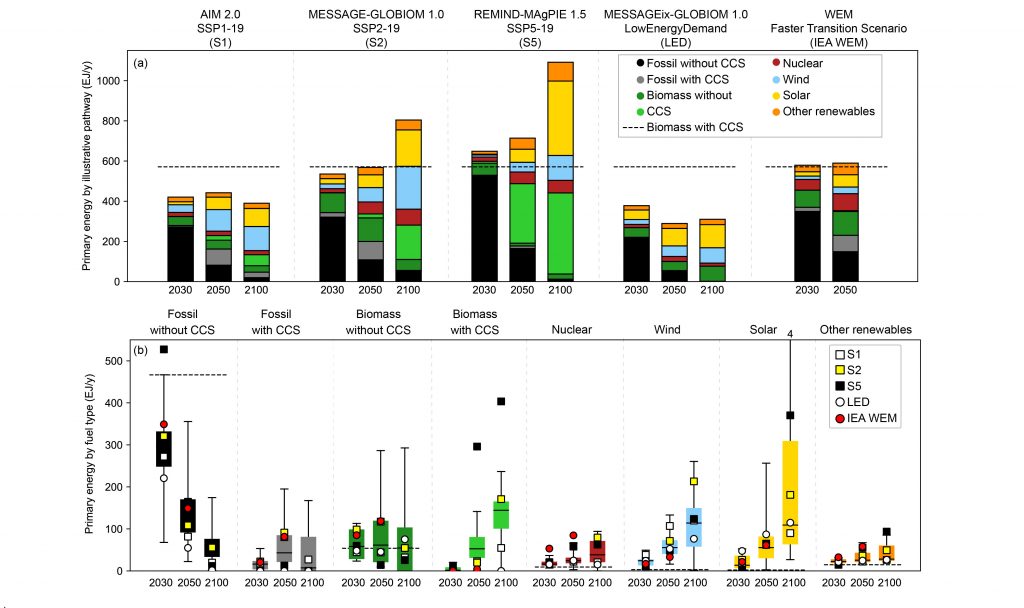 Primary energy supply for the four illustrative pathway archetypes plus the IEA’s Faster Transition Scenario (OECD/IEA and IRENA, 2017) 371 (panel a), and their relative location in the ranges for pathways limiting warming to 1.5°C with no or limited overshoot (panel b).

Figure 1 – Electricity generation by fuel type for a 1.5oC transition.

The IPCC explains that in the bottom box plot, the dots inside the quantities are different scenarios to achieve the 1.5oC. Panel a of Figure 1 demonstrates that, without CCS, there is no room for any fossil fuel usage. With CCS, there is room for fossil fuels, albeit in small amounts compared to sustainable sources.

Even so, the use of fossil fuels will need to continue—to a limited degree—for now. For security considerations, in emergencies such as the one now affecting Europe (a result of the Russian invasion of Ukraine), they offer some of the best flexibility. In regulating the amounts of fossil fuels, their price can be connected to the sequestration of emissions.

The state of the US efforts, both government and oil companies, to develop CCS is summarized on the Oil Price site.

As I mentioned in last week’s blog, there’s a recent 3-part PBS Frontline television series that looks at the history of the federal legislation tracking records of dealing with climate change. According to Frontline, 2008-2010 were the “golden years” of federal attempts to confront climate change. The House passed a Cap-and-Trade policy, and the Senate was ready to follow. Even oil companies started a series of discussions on how to adapt while remaining productive and profitable. This progress lasted until the Koch brothers found a “better” way: they succeeded in converting the discussion by emphasizing the “uncertainty” of the science and changing the political landscape to freeze federal legislative action. This pushback against the needed energy transition was amplified with the election of President Trump and his MAGA shift. We lost an important decade in the fight.

It seems that now, as many countries urgently confront their dependence on Russia for their energy needs, we have an opportunity to revisit the issue on a global scale.

However, the announcement of many of the oil companies to convert themselves to “net-zero” companies is justifiably meeting with serious skepticism. Figure 2 shows the main reason: they may be talking big but their capital investments in the needed technologies for the development of the alternative energy sources shown in Figure 1, are minuscule. According to Wikipedia, capex (capital expenditure) is “the money an organization or corporate entity spends to buy, maintain, or improve its fixed assets, such as buildings, vehicles, equipment, or land.” These companies’ total capital expenditures are in the billions of dollars. In 2018, for instance, BP spent over $25bn for capex; according to Figure 2, within the 3rd quarter, they only put 2.3% of that budget toward low-carbon technology. Interestingly, BP spent the most of all of the companies listed here, even though Chevron, Shell, and ExxonMobil are much larger. 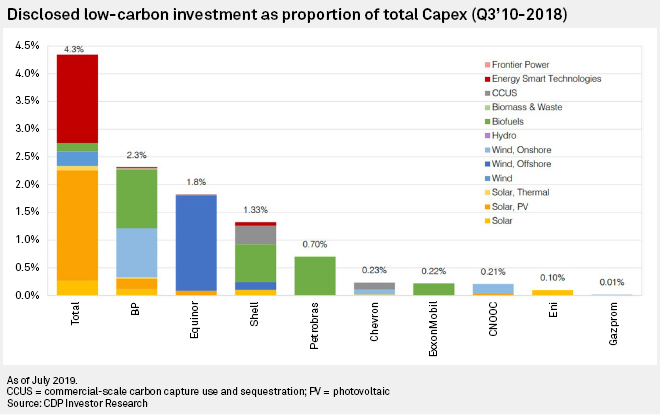 President Trump was a great supporter of one avenue toward capturing carbon dioxide: planting more trees. The “trillion trees” movement gained a serious global following, seemingly an easy way to save the planet, as the following paragraph summarizes:

The idea that trees can help limit global warming is enshrined in the 2015 Paris climate agreement, with most countries including forest expansion as part of their plans to reduce emissions. Reports and studies from the Intergovernmental Panel on Climate Change estimate that nature-based solutions, including healthy forests, could provide up to one-third of the emissions reductions required by 2030 to meet the Paris Agreement targets.

However, trees require land and water, and they are prone to fire, as we observe now on an almost daily basis. They will never be able to compensate for all the carbon dioxide we emit. CCS can be viewed as a useful technological alternative but the technology itself still needs investment and work.

Next week’s blog will continue to explore the IPAT identity for other avenues that oil companies can take to both fulfill their net-zero carbon commitments and remain viable businesses.