Posted on February 18, 2013 by climatechangefork

The perspective of sustainability that I have advocated in the last three blogs was aimed toward the horizon and focused on maintaining equilibrium with the physical environment. I proposed reaching this equilibrium through a combination of recycling our resources, a shift to sustainable energy sources, and internal growth to globally equalize individual opportunities for a better future. Quoting President Obama, the horizon was defined not in terms of fixed time span but as an aspiration to be balanced by present needs. The need to satisfy present needs while at the same time trying to ensure the needs of future generations will be met, often constitutes conflicts that require great societal skills.

Such conflicts are not new. Many economists tend to discount the future (John Maynard Keynes – “In the future we are all dead…” February 4 blog) yet most environmental regulation requires an aspect of economic impact analysis. On a related note, one of the main topics occupying decision makers today is how to rein in the federal deficit without slowing growth. If we truly discount the future, however, both of these become unnecessary exercises – after all, in such a case all environmental regulations are unnecessary, not to mention – why worry about the deficit? When most of us invest, whether in the stock market, real estate or in any other form, our main objective is to secure a future return on our investment, while at the same time minimizing the risk that should things turn sour, we will find ourselves without our much-needed resources. Here, it is the same principle, only with much larger stakes.

On January 16 – 2013, the New York Times conducted an online debate on its forum “Room for Debate.” The subject of the debate was “When Growth is not a Good Goal.” Four opinions were presented with short descriptions given below: 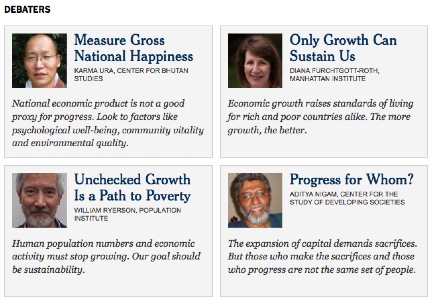 What was completely missing in the debate was the notion of reaching and maintaining all four objectives simultaneously.

I have discussed the NIMBY (Not In My Backyard) phenomenon in previous blogs (June 18, July 2, August 27, December 3) – it’s one of the main obstacles that we encounter in trying to put any framework for a sustainable future into practice. It revolves around the conflict between perceived adverse impacts on the individual or a community versus the agreed upon benefit to the larger community. This affects international agreements – if the impact is global, why should we mitigate while others are doing nothing? Or, to once again quote Governor Romney’s excuse for advocating inaction, (December 24 blog) “Climate Change is called Global Warming not American Warming.” In other words, it embodies the oft-used sentence, “why me?” To resolve the NIMBY phenomenon in this instance, we need to be able to navigate seemingly conflicting interests and gain the ability to look at the horizon, as difficult as we may find this task.

I have been trying to address some of these conflicts through games. Recently, I have been collaborating with Prof. Lori Scarlatos from Stony Brook University to develop games that are designed to compare the real world with a simulated world whose conditions change based on the players’ decisions. The players must balance immediate local interests with long-term societal interests. They then have the ability to “check” how they are doing against real data. We have named such efforts “Reality Based STEM Instructions with Participatory Learning Systems.” Not surprisingly, our first example focuses on energy choices and is titled “Intelligent Energy Choices” (IEC) (See for example, Micha Tomkiewicz and Lori Scarlatos, “Bottom-up Mitigation of Global Climate Change”; The International Journal of Climate Change: Impact and Responses; Volume 4, pages 37 – 48, 2013). The game is designed to engage the general public (and possibly educators at high school and college levels) with an interactive, interesting, tool that allows users to “control” their countries and by doing so, control the fate of the world. The conclusion from playing and observing IEC is that Millennium Development Goals can be satisfied while both the countries that they rule and the world at large prosper. IEC is an agent-based simulation/game in which the world’s twenty-five most populous countries are represented either by autonomous agents (simulation) or players. IEC is focused on energy use and climate change and their global and national impact on climate and prosperity. The algorithm corresponds to a choice between purchasing the lowest cost energy sources or a Cap and Trade mechanism in which global emissions are regulated to constantly decline and the price of a “unit” of carbon dioxide is collectively adjustable. The reference year is taken as 2003 so data are available for comparing the bottom-up results of the world controlled by the players and the top-down recent data.

The players face a conflict between generating sufficient wealth in the country they control, while at the same time ensuring the world’s long-term survival. Players are graded on both ends. We know how to evaluate the game in instructional settings. The usual tool to gauge its effectiveness with the general public is to measure its popularity, however this is often a misleading criterion for an educational tool. Popular does not always relate to effectiveness or instructional value. The effectiveness as an educational tool for the general public should be tested in the ballot box. This issue is starting to receive some attention and will be discussed in the next blog.

Micha Tomkiewicz, Ph.D., is a professor of physics in the Department of Physics, Brooklyn College, the City University of New York. He is also a professor of physics and chemistry in the School for Graduate Studies of the City University of New York. In addition, he is the founding-director of the Environmental Studies Program at Brooklyn College as well as director of the Electrochemistry Institute at that same institution.
View all posts by climatechangefork →
This entry was posted in Climate Change and tagged Cap and Trade, Climate Change, Economics, Environment, Game, Global Warming, Horizon, IEC, Investment, Keynes, Lori Scarlatos, NIMBY, Obama, Romney, Science, Sustainability. Bookmark the permalink.

4 Responses to Conflicts and Navigation