Posted on February 11, 2014 by climatechangefork

Half of the countries worldwide now have sub-replacement fertility. The downside to this trend is shrinking labor forces – a factor which has led some governments to try to reverse the course and increase fertility. Romania banned abortion, and fertility briefly increased – until illegal sources of abortion appeared to meet demand.  Other countries like France and Germany in the 1930s provided families with generous incentives ranging from free childcare to cash payments for additional children, but these actions did not produce substantially higher fertility. The relaxation of China’s one-child policy may result in higher fertility, but the effects will not be known for several years.

There have been several attempts to reverse these negative impacts, specifically with regards to the shrinking labor forces.

Abortion: As the figure below shows, there is no correlation between the legal grounds on which abortions are permitted globally and the demographic concern about crossing the replacement fertility rates. While abortions on request are permitted in most developed countries, this is not the case in most developing countries. Public debates and demonstrations about abortion are almost always front page news. These often correlate with individual religious beliefs, arguments about the sanctity of life, and women’s safety and autonomy over their own bodies. Spain is going through such a debate right now, and fertility rates and population growth play no part in the argument. 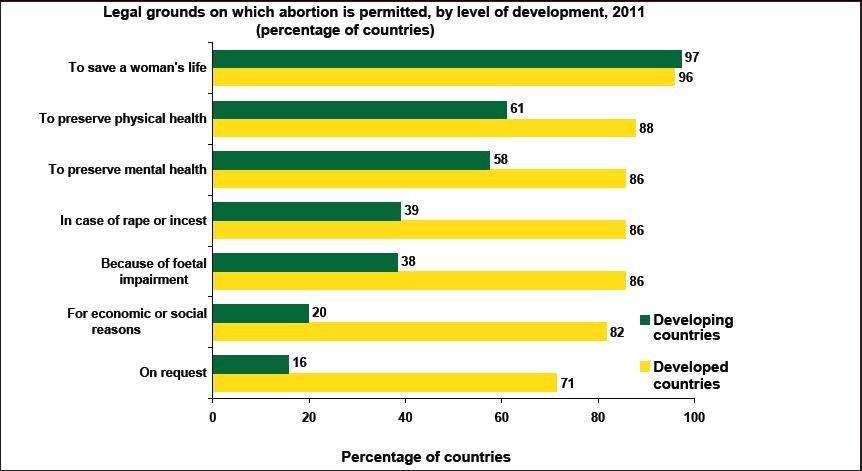 Money: About eight years ago I visited Russia, one of the countries with the most serious fertility declines below replacement. Vladimir Putin was a new president at the time and he had promised Russian women $5,000 for every new baby that they gave birth to. I asked my young Russian guides if they planned to go along with this and “produce” some babies – apparently it was the patriotic thing to do. Without exception, they laughed and said that if Putin were to promise them an apartment, then they would think about it.

Incentives to attract and keep women in the work force: As we saw in the previous blog, this is clearly working and is a major factor to account for the lack of clear correlation between the decline in fertility rates and changes in the size of the work force. The relative number of women does not increase beyond their demographic ratio. The recent effort on this score can be found in South Korea:

With an aging population threatening to undermine South Korea’s economic growth, Park, the nation’s first woman president, has pledged to lift the female employment rate to 61.9 percent, from 53.5 percent, before her term ends in 2018. Cho Yoon Sun, the minister for gender equality, is working with the family-run industrial groups called chaebol to try to end male-dominated employment practices.

Incentives to keep older people in the workforce: I am nine years past the upper limit of the age of the “working population.” I keep working because I have the choice. I like my work, I am in reasonably good health, and by any available standard I do as a good job now as I did when I was younger. For most positions in the US, an employer could not fire me for being old, without facing a lawsuit for age discrimination. Many older workers don’t have this choice. They would love to retire, but they cannot do so because of economic concerns. The pension obligations of many public employers and some private employers are deteriorating to such a degree that they are incapable of paying those already owed, much less those who have yet to retire. Perhaps in part due to that, the age definition of “working population” is drifting upward. This drift, similar to the limits on female participation in the work force, is self-limiting by biology. Life expectancies are not increasing at the same rate as our ability to be healthier and stay longer in the workforce.

In the long term (again, I will use 1000 years as my yardstick) these trend will not stabilize the negative impacts of a steadily declining population.

There is one “remedy” that might do the trick by changing the equation for stabilization: replacing humans with robots, where applicable.

Let’s look at deaths first: Death rates have been declining for more than a century, even taking into account the overall aging of the population and the ongoing HIV epidemic. Purposefully containing population growth by increasing deaths would require us to resort to the apocalyptic factors of war, pestilence and starvation; strategies which few would advocate.

These two paragraphs are indeed as true as they seem. The times in which we purposefully “adjusted” global populations on a massive scale through deaths using wars and epidemics as tools, are hopefully long past, not to return. I am obviously excluding possibilities of collective insanities such nuclear Armageddon. But technology and innovation offer other options that work to achieve the same objective. Our moral code objects to the use of death to control population, but it doesn’t object to the destruction of machines to control the workforce.

As I have mentioned repeatedly, at the time that I was born the world population was around 2 billion, a number which has increased to 7 billion during my lifetime (as of October 2011). I have also mentioned that if we allow the population to shrink back to around two billion, the population pyramids (January 21, 2014 blog) will drastically change, reducing the number of working age adults that are available to support the rest of us. Can we – instead of stabilizing the population – stabilize the “working hands,” while letting the overall population shrink? It seems that not only is such a solution feasible, but we are already (inadvertently) making great “progress” with such a scenario.

The figure below shows the estimated worldwide shipment in industrial robots (in thousands). In 2011 sales of industrial robots reached 166,000 units, an increase of 38% compared to 2010. The shipments are estimated to exceed 200,000 by 2015. Presently, the largest purchaser is the automotive industry. 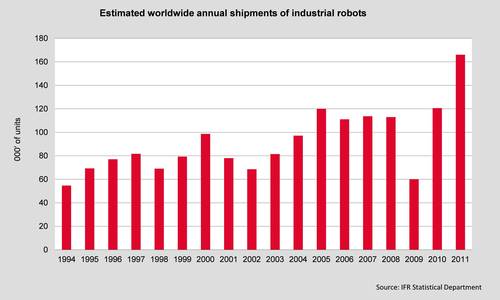 This number doesn’t include domestic robots or those that are being used in the service industry, but it reflects a clear trend toward their increased participation in the workforce.

The increasing participation of robots in the workforce, along with their growing ability to replace humans in many tasks, has often been labeled as the Second Industrial Revolution. Once or twice in some academic meetings, I have also heard the term “Third Industrial Revolution,” which limits the second one to the introduction of computerized gadgets. Whatever your preference, once we use the trend in the same context as the original Industrial Revolution, we have to include Luddites in the discussion. “The Luddites,” according to Wikipedia, “were 19th-century English textile artisans who protested against newly developed labour-saving machinery from 1811 to 1817.” In each case, the advents of these technological breakthroughs have been met by some with strong disapproval. Since this happened following the use of machines to replace workers – both in the 21st century and the 19th century predecessor, it seems fair to use the same term to describe the like-minded groups. In any case, our economy will require a new paradigm in order to assuage any current or future Luddites. It is key to emphasize that what we need robots for now is not so much to replace human workers as supplement them. We have a large job ahead of us: using a shrinking percentage of working age people to care for the growing percentage of older generations, and some of it might be easier if we can delegate certain tasks to machines.

Micha Tomkiewicz, Ph.D., is a professor of physics in the Department of Physics, Brooklyn College, the City University of New York. He is also a professor of physics and chemistry in the School for Graduate Studies of the City University of New York. In addition, he is the founding-director of the Environmental Studies Program at Brooklyn College as well as director of the Electrochemistry Institute at that same institution.
View all posts by climatechangefork →
This entry was posted in Climate Change and tagged Abortion, Adaptation, Climate Change, Environment, Fertility, Fertility Replacement Rate, Global Population, Incentives, Industrial Revolution, Jim Foreit, Korea, Labor Forces, Luddites, Population, Replacement Rate, Robots, Spain, Sustainability, Women, Working Population, World Population. Bookmark the permalink.