Educating for the Anthropocene: Learning Science in an Informal Environment

Posted on June 14, 2016 by climatechangefork

Political decisions in the Anthropocene require an understanding of the interactions between humans and the physical environment, as well as how to make them sustainable for future generations. These decisions cannot be limited to a small group of scientist advisors; there needs to be a common language between the scientists and the decision makers. We can only make that sort of common language prevalent amongst the general public if we extend our education beyond our short school careers to encompass the rest of our lives.

Such efforts must be global but I will focus on progress within the United States.

In a previous blog in this series (May 17) I outlined Pew Research survey data about the disconnect between the beliefs of the general public and scientists (chosen from AAAS membership). I looked at the different views on human evolution, climate change, and the Big Bang mechanism.

I am including another chart from the same Pew Research site regarding public perception of human evolution: 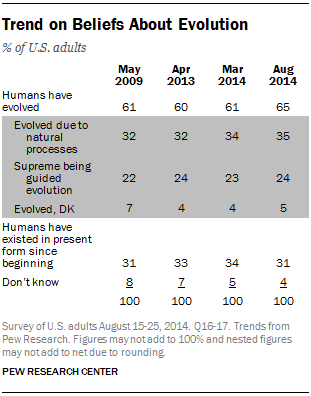 The 55% (August 2014) of US adults who actively stated they don’t believe humans evolved due to natural processes (supreme being guided evolution + existed in present form) are probably eligible voters in any upcoming election – including the presidential race.

National Academies held a committee regarding how people learn science and published a book summarizing its conclusions:

Do people learn science in non-school settings? This is a critical question for policy makers, practitioners, and researchers alike—and the answer is yes. The committee found abundant evidence that across all venues—everyday experiences, designed settings, and programs—individuals of all ages learn science. The committee concludes that: Everyday experiences can support science learning for virtually all people. Informal learning practices of all cultures can be conducive to learning systematic and reliable knowledge about the natural world. Across the life span, from infancy to late adulthood, individuals learn about the natural world and develop important skills for science learning.

Strand 1: Experience excitement, interest, and motivation to learn about phenomena in the natural and physical world.

Strand 4: Reflect on science as a way of knowing; on processes, concepts, and institutions of science; and on their own process of learning about phenomena.

Strand 5: Participate in scientific activities and learning practices with others, using scientific language and tools.

Strand 6: Think about themselves as science learners and develop an identity as someone who knows about, uses, and sometimes contributes to science.

There is a clear and strong commitment among researchers and practitioners to broadening participation in science learning. Efforts to improve inclusion of individuals from diverse groups are under way at all levels and include educators and designers, as well as learners themselves. However, it is also clear that laudable efforts for inclusion often fall short. Research has turned up several valuable insights into how to organize and compel broad, inclusive participation in science learning. The committee concludes:

Recommendation 2: From their inception, informal environments for science learning should be developed through community-educator partnerships and whenever possible should be rooted in scientific problems and ideas that are consequential for community members.

Recommendation 3: Educational tools and materials should be developed through iterative processes involving learners, educators, designers, and experts in science, including the sciences of human learning and development.

They may also serve as the interface between informal institutions and programs and schools, communities, and groups of professional educators. Given the diversity of community members who do (or could) participate in informal environments, front-line educators should embrace diversity and work thoughtfully with diverse groups.

Recommendation 4: Front-line staff should actively integrate questions, everyday language, ideas, concerns, worldviews, and histories, both their own and those of diverse learners. To do so they will need support opportunities to develop cultural competence, and to learn with and about the groups they want to serve.

I have been aware of the urgent need to expand science education for some time. Many years ago I attended a contractors meeting about researching new solar cells. The Department of Energy (DOE) was funding this research. Its representatives organized the meeting and took part in the discussions. One of the representatives’ comments is now permanently lodged in my brain. He told us never to use logarithmic functions in our reports. The DOE representative was a scientist and personally had no problem with logarithmic functions. His argument was that it is congressmen and their staffs who must read the reports and then approve the DOE budgets that support our work. These are the people who struggle with logarithmic functions; these are the members of the public that we must equip with the knowledge necessary to govern the Anthropocene. I have often discussed logarithmic functions in this blog (August 6, 2012) and have emphasized how essential it is to convey quantitative information. It is imperative that instead of “dumbing down” material we focus on educating its readers.

The National Academies committee on learning science in informal settings was comprised of scientists from various disciplines. Their report extends teaching science to other settings besides traditional school environments and provides assessment tools for the effectiveness of learning in such alternative environments. The audience of learners that they address is not much different from the audience that schools target when trying to increase their science enrollment. It does not extend to the “general public” and does not address the most basic element of the scientific method that should be kindled within every one of us. (June 18, 2012):

The Popperian scientific method is based on refutability. We develop a hypothesis and/or theory based on everything that we know, and we should be able to test the theory based on predictions for observations that we haven’t yet made. If the tests fail, we change the theory. This amounts to prediction of future results. Since we are part of the system, failure might mean closing the window that allows us to survive. The science we’re talking about here is more like medicine – we have to make a rational diagnosis about the changes that take place in the physical world, but if our predictions might result in a harmful impact, we will need to act. On this scale, actions to restore equilibrium must become part of the science that we practice.

We cannot understand, vote or govern in the Anthropocene without believing in this fundamental basis of science.