Posted on June 18, 2012 by climatechangefork

In the following set of blogs, I will try to outline four major challenges to the democratization of the decision making process that, in my view, are needed to address the challenges that anthropogenic changes in the chemistry of the atmosphere will pose (see the previous two blogs).  These challenges are: climate change and the nature of science; science “hatred”; we are not prophets; and NIMBYism.  I’ll outline each briefly:

Climate Change, the Nature of Science and What Impacts and Constitutes the     “Physical World”

I can argue with both definitions but especially with the Britannica statement that science involves a  “pursuit of knowledge covering general truths…”  I subscribe to the Popperian definition of the scientific method that is based on refutability and denies the existence of “general truths.”  A theory is “true” until it is refuted by observations; if it cannot be refuted – it is not science.  I will get back to the refutability issue shortly. Right now, I want to focus on the part common to both definitions – science is a “system of knowledge that is concerned with the physical world and its phenomena”.

As was mentioned in previous blogs, I was born in 1939.  The approximate world population at that time was 2.3 billion people.  In October 2011, we reached the 7 billion population milestone.  During my lifetime, almost 5 billion friends were added to my earth family – and I am still kicking.  My expanded family is not only considerably bigger, but also considerably richer in the aggregate.  These developments are changing the nature of the part of the physical world that we live in.  We are now an important part of the physical world on planet earth.  I will quantify this further in future blogs, but when we try to investigate global phenomena such as climate change, we have to include “us” in the system that we investigate.  In medical or legal terms, this process is called self-diagnosis or self-defense.  A common saying is that a lawyer that serves as his own legal adviser has a fool for a client.  The same holds true for a doctor that tries to treat himself when a serious medical issue is involved.  Doctors and lawyers have the option to hire somebody else.  The global human population doesn’t have these options.  We haven’t yet identified an exoplanet that can help.

Many of us say we “hate” science and students that take my courses, which are identified as science courses, tell me with great pride that they “despise” math.  Most of us either don’t want to or can not afford to study science.  Yet now, we have only two choices: we must either learn science in order to  knowledgeably participate in decisions that will revolve around climate change or quietly suffer the consequences of governmental and other decision making that is centered on scientific issues that affect our daily life.

The Popperian scientific method is based on refutability.  We develop a hypothesis and/or theory based on everything that we know, and we should be able to test the theory based on predictions for observations that we haven’t yet made.  If the tests fail, we change the theory.  This amounts to prediction of future results.  Since we are part of the system, failure might mean closing the window that allows us to survive.  The science we’re talking about here is more like medicine – we have to make a rational diagnosis about the changes that take place in the physical world, but if our predictions might result in a harmful impact, we will need to act. On this scale, actions to restore equilibrium must become part of the science that we practice.

NIMBYism  (Not In My Backyard)

Climate Change is a global, collective phenomenon that all of us contribute to and that, sooner or later, will affect us all.  There’s no “backyard” that we can try to protect or hide in.  The required remedies are global.  Non-participants tend to freeze the global response and potentially put everybody in danger.

All of these challenges have a single common denominator; all of them can be – and must be – addressed through the educational system.  This is an enormous task and it is global and not simply confined to schools.  In later blogs, I will elaborate on possible networks that can be used and the available time to do that.  It will take a few generations (my definition of the “End of Now” in my book is within the lifetime of my grandchildren). 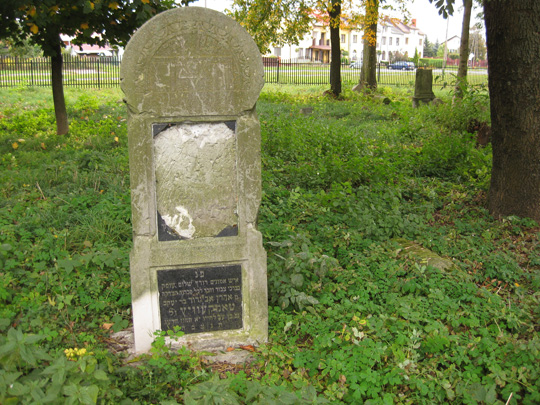 The Tombstone of Aharon Avigdor Tomkiewicz in Wysokie Mazowieckie, Poland

I had a recent, very personal, “End of Now” experience.  I have just returned from a trip to Poland where I visited the village of Wysokie Mazowieckie, situated between Warsaw and Bialystok.  Before WWII, about 70% of the population was Jewish.  The village was burned by the Nazis and most of the people were murdered, yet, about six years ago, a young local history teacher uncovered one of the two Jewish cemeteries.  He had his students clear the place and find whatever tombstones they could.  The most prominent tombstone found, that now stands erect in the middle of the cemetery and is shown here, is that of Aharon-Avigdor Tomkiewicz, my great-grandfather, who was a shop keeper in the town and died in 1913 – about 100 years ago.  This was my historic “End of Now.”  A great deal has happened since then and a great deal can happen going forward – but we will have to work on it.

Micha Tomkiewicz, Ph.D., is a professor of physics in the Department of Physics, Brooklyn College, the City University of New York. He is also a professor of physics and chemistry in the School for Graduate Studies of the City University of New York. In addition, he is the founding-director of the Environmental Studies Program at Brooklyn College as well as director of the Electrochemistry Institute at that same institution.
View all posts by climatechangefork →
This entry was posted in Climate Change and tagged Clean Energy, Climate Change, Climate Change Deniers, Climate Skeptics, Democratization, Environment, Global Warming, Karl Popper, NIMBY, Science. Bookmark the permalink.