Declaration of Victory and Exit Strategy

Posted on September 24, 2012 by climatechangefork

The title of my previous blog was “Declaration of War.” I wrote:

In the next few blogs I will try to expand this notion to include non-military action, with a specific focus on climate change. My objective is to look into how we can define a victory, as well as be able to outline an exit strategy.

I didn’t elaborate whom the war and victory were directed against, so I will try to do so now.

Anthropogenic (human-caused) climate change is a global phenomenon to which all of us contribute, and whose consequences all of us, particularly future generations, will suffer. In this sense, it is a global civil war of man against man and man against his physical environment. My use here of the term global is not restricted to humans but includes the physical environment, since the issue will affect our entire ecosystem. This complements my expanded definition of Science (June 25) that now includes human behavior. As in any other war, victory will be declared when we can stop fighting the physical environment by making our lifestyle compatible, thus ending the struggle.

I obviously have to be much more specific. The four figures below illustrate two possible scenarios out of the more than 40 on which the IPCC is reporting. We can declare “victory” and exit the battlefield if by toward the end of the century we can derive more than half of our global energy from non-fossil sources, a development that would approximately follow the dynamics of B1 in Figure 4. 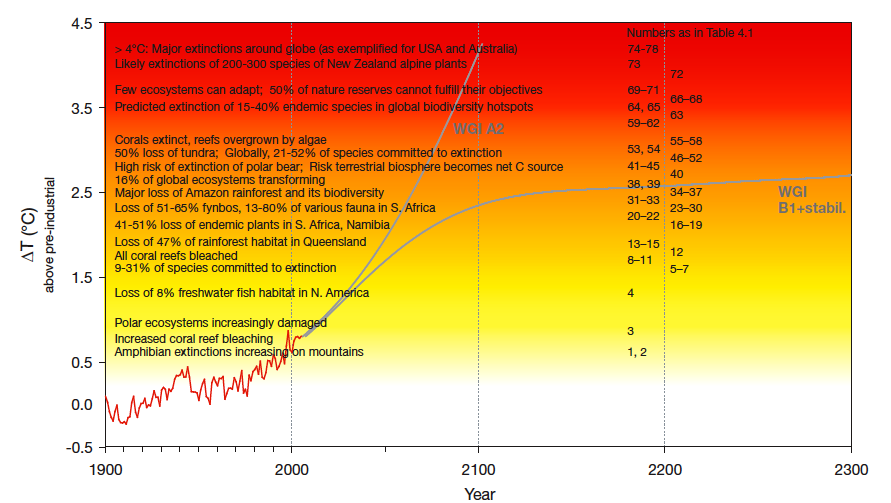 Projections of Population and primary energy use based on the IPCC AIM B1 and A2 scenarios (Micha Tomkiewicz, Sustainability, 2, 204-214 (2010)). 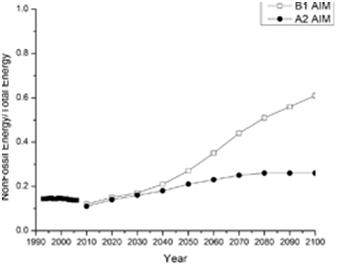 Figure 1 shows the projected temperature increase and the environmental consequences of two future scenarios marked as A2 and B1. These are just two of the more than 40 scenarios that IPCC is reporting on, with the explicit statement that none of them is any more likely than the others. Our outcome depends on our choices. All 40 of these scenarios lead to a higher standard of living. The present (2000) average global GDP per capita is about $5,000. Toward the end of the century, the A2 scenario projects a GDP per capita of $16,000 while the B1 reaches an astonishing number of $47,000 (SRES. 2002. “The SRES Emissions Scenarios.” http://sedac.ciesin.org/ddc/sres ). Both numbers reflect dollar values that have been adjusted for inflation. Thus, the B1 scenario implies an average global standard of living equal to that presently found in the US.

From Figure 1, the A2 scenario reflects the projected outcome of a “business as usual” scenario: a boundless increase in temperature. The figure goes on to note some of the expected consequences of such circumstances. In the B1 scenario, the impact stabilizes to a global temperature increase of roughly 2.5oC (4.5oF). An increase that leads to saturation at this level can be handled through adaptation policy (particularly with the available wealth in this scenario). There are two major differences between the two scenarios: population and the fraction of energy derived from non-fossil sources. Figure 2 addresses population: in A2, the projected global population toward the end of the century reaches around 15 billion, while B1 peaks around 8 billion mid-century, then declines back to the present population of 7 billion by 2100. Figure 4 describes the fraction of energy derived from non-fossil sources: A2 increases slightly to 25% toward the end of the century while B1 increases to close to 60%. Amazingly, the two scenarios project the same energy use per person (Figure 3), a factor that continues to increase, driven by the projected global increase in the standard of living. The total energy use in A2 is obviously much larger compared to B1 because of the larger projected population. The difference in projected populations between the two scenarios looks to be very large; however, it amounts to less than 1% global population growth. Such is the power of exponential growth.

As has been proven time and again, population growth is impossible to control politically from top down. Repeatedly it is being proven that the most effective mechanisms for birth control are educational opportunities and health care availability, especially for women. Both usually accompany the projected increase in the standard of living.

Based on such scenarios, the remedy is available through collective decision making, i.e. – the political system, the extent to which we use non-fossil fuels to generate our energy, etc.

Achievement on the line described in Figure 4 amounts to a global energy transition. For a global impact, such a shift implies a considerably enhanced shift in developed countries. Aiming for something close to such a shift amounts to an exit strategy; achieving it would count as a tremendous victory. The next blogs will discuss various aspects of the policy changes and technical issues that such a shift involves.

Micha Tomkiewicz, Ph.D., is a professor of physics in the Department of Physics, Brooklyn College, the City University of New York. He is also a professor of physics and chemistry in the School for Graduate Studies of the City University of New York. In addition, he is the founding-director of the Environmental Studies Program at Brooklyn College as well as director of the Electrochemistry Institute at that same institution.
View all posts by climatechangefork →
This entry was posted in Climate Change and tagged Climate Change, Climate Change Deniers, Climate Skeptics, DNNer, Emissions, Environment, Exit Strategy, Fossil Fuels, GDP, Global Warming, IPCC, Science, ScienceDebate, Victory. Bookmark the permalink.

11 Responses to Declaration of Victory and Exit Strategy