Posted on September 10, 2013 by climatechangefork

As I have discussed previously, the Earth does not lack for water in general; instead, it is the serious shortage of fresh water that inflicts stresses all around the world. This trend is projected to get even worse as a result of both the increasing global population and climate change (see the September 3 blog). Can we do something useful to address these stresses?

Water is crucial for the survival of living organisms on this planet (including us humans). The uniqueness of Earth’s abundance of liquid water coincides with the uniqueness (so far as we know) of our planet’s ability (among the billions of billions of other star systems) to sustain life. There is an ongoing search for other star systems that are suitable for sustaining life (see the January 28 blog on the Physics of Sustainability). The list of potentially habitable planets changes often, and is critically dependent upon our ability to identify conditions on planets outside our own solar system (exoplanets). A partial list can be found on Wikipedia. The existence of liquid water on the surface or close to the surface constitutes the main criteria for possible suitability to sustain life in any form.

Water is essential to life. Life can flourish in the oceans but many living species (including humans) need fresh water for survival. How can we manage the availability of fresh water to satisfy the ever growing needs driven by increasing demand?

The figure below outlines our current global use of fresh water. The data is rather enlightening: 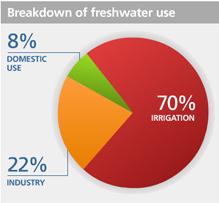 Humankind’s long-term fresh water needs can be satisfied with a combination of three different strategies:

I will start here with recycling and elaborate on the two other aspects in future blogs.

In order to assure long-term sustainability (February 4 blog) we must, one way or another, recycle all of the commodities that we extract from Earth. The one commodity that physics limits our ability to recycle is energy. I will elaborate on the reasons for that later on; for now (please) take my word for this. Almost all other commodities can be either recycled/ reused, or can be replaced by alternatives that are more easily recyclable. Water is the exception here – we need fresh water for both direct and indirect use – for everything from the food that we eat to our sanitation needs. Other uses of water, such as for the cooling of power stations, can be modified to be able to use ocean water directly. In my previous blog (September 3) I described in some detail the global water cycle, which details how all water that we use has been (and will perpetually be) recycled water (see the previous blog for the qualifiers to this statement). The real question is: can we then convey this concept to a more human scale for local use?

In this case, the aim is to create a closed cycle to recycle and regenerate fresh water; mirroring the natural global system in a smaller, human-controlled setting. A perfect cycle implies complete conservation of the recycled quantity, in this case – fresh water. Since the two are inextricably linked, as the demand for fresh water increases, so too does the amount of resulting waste water. The waste water, if not treated, will rejoin the water cycle contaminated from its use. This contaminated water will ultimately end up back in the ocean. Throughout history, people have accepted this practice under the assumption that since the oceans are so large, “dilution is an acceptable solution.” This is no longer a sustainable argument – with 7 billion water users and advanced scientific understanding of the chemistry of the ocean, there is a growing understanding that this practice cannot continue. Additionally, while this practice acknowledges the issue of dumping waste water, it doesn’t address the correspondingly increasing need to supplement the depleting fresh water reservoirs.

In developed countries, the technology to treat waste water has not yet reached the stage where families reuse theirs, but in many developing countries, where family plots serve as a main source of food, family waste water is used as source of irrigation. This is especially relevant since, as we saw earlier, irrigation is presently the main consumer of fresh water.

Certain forms of water recycling are being practiced around the world (“The Global Water Recycling Situation” by B. Van der Bruggen in “Sustainable Water for the Future: Water Recycling Versus Desalination;” Isabel Escobar and Andrea Scafer Editors;  Elsevier – 201, p. 41).  This is specifically true in stressed regions with severe fresh water shortages. It was reported that in China (1989 data), the average fraction of fresh water reused in 82 large cities was 56%. The maximum fresh water use in these cities has reached 93%.

Recycled water has been utilized in multiple capacities, including agricultural irrigation, process water in industry and the production – either direct or indirect –of potable (drinking water). Every application requires its own specifications in terms treatment and the technology can be optimized to fit the need.

Each of these uses has received (at least majority) approval –all of them except the application as drinking water (potable water).

The two cartoons below demonstrate the problem with the concept: 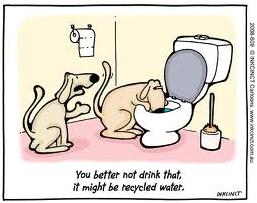 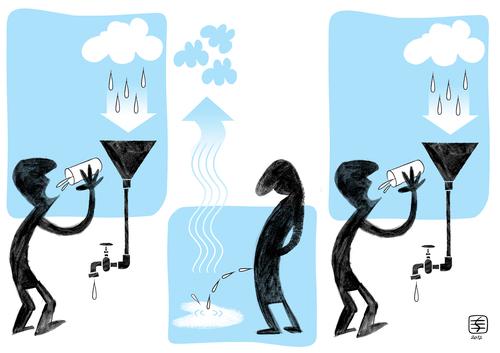 Human psychology plays an important role in the setbacks to the success of this system. In an article titled “From toilet to tap,” Sadie F. Dingfelder ( American Psychological Association publication) describes the dilemma this way:

The method makes water that is “abundant and safe,” says Brent Haddad, PhD, associate professor of environmental studies at the University of California, Santa Cruz. “The technology is remarkable and can treat water to an often higher quality than the water that originally entered the system.”

However, attempts to reintroduce purified wastewater into the aquifers and rivers from which cities draw their supplies has met vehement opposition from citizens’ groups, stalling water recycling projects in cities from San Diego to Tampa, Fla. According to Haddad, who studies the success of water reuse initiatives, and University of Pennsylvania psychologist Paul Rozin, PhD, who studies disgust and contamination, this opposition comes more from a knee-jerk response to wastewater–the “yuck” factor–than from concerns about the water’s chemical composition.

In people’s minds it’s “once in contact, always in contact,” explains Rozin. “Even if you convince people you did every conceivable thing to [purify] the water they would still be reluctant to drink it.”

The effect is known (in some circles) as the “yuck factor” or the “wisdom of repugnance.”  While psychologists (especially Prof. Rozin from the University of Pennsylvania) are trying their best to find remedies to this mental stumbling block, it is up to all of us to help. We must overcome our squeamishness, even as we take other steps to mitigate and adapt to the root causes of these problems.

Micha Tomkiewicz, Ph.D., is a professor of physics in the Department of Physics, Brooklyn College, the City University of New York. He is also a professor of physics and chemistry in the School for Graduate Studies of the City University of New York. In addition, he is the founding-director of the Environmental Studies Program at Brooklyn College as well as director of the Electrochemistry Institute at that same institution.
View all posts by climatechangefork →
This entry was posted in Climate Change and tagged Clean Energy, Climate Change, Desalination, Environment, Exoplanets, Fresh Water, Recycling, Waste Water, Water, Water Cycle, Water Shortage, Water Stress. Bookmark the permalink.