The World and Me

Posted on September 30, 2014 by climatechangefork

The new report on climate change focused on the idea that by converting some “externalities” into “internalities,” one can show that a carbon tax in some form or another could effectively mitigate climate change. The report also concluded that such efforts could both save money overall and accelerate economic growth, provided that the money from the tax were used to balance and reduce other taxes (see Eduardo Porter’s, “The Benefits of Easing Climate Change,” NYT September 23, 2014).

All of this has happened in the middle of what has seemed like the world catching fire. President Obama reflected on these situations in his address to the United Nations, a speech that was well summarized by the New York Times’ Mark Landler:

Even so, Mr. Obama said, the threat from the Islamic State was only the most urgent of an onslaught of global challenges that have given the United States no choice but to take the lead: from resisting Russia’s aggression against Ukraine to coordinating a response to the Ebola outbreak in West Africa; from brokering a new unity government in Afghanistan to organizing a new campaign to confront climate change.

The United Nations special session ended with a slew of commitments, which the UN Secretary General, Ban Ki-moon, later summarized. These included halving the loss of natural forests globally by 2030, palm oil producers aiming for zero net deforestation by 2020, a commitment by institutional investors to decarbonize 100 billion worth of investment by 2015 (see also Justin Gillis’s piece in the same September 23rd NYT publication), and the Insurance Industry’s commitment to double its “green” investments by the end of 2015.

All of these are in addition to commitments from large emitters like China and the US to work towards specific (lower) targets for emission of greenhouse gases.

As always on these issues, we will have to wait and see to what extent actions match intent. Toward the end of next year, there is a meeting scheduled in Paris, which is supposed to come out with a draft treaty to replace the Kyoto Protocol.

A day after the UN meeting I was invited to teach a class at a different school. The course was focused on global challenges and my talk was titled “Personalizing Global Challenges,” with a focus on climate change. Two of the faculty members and one of the students had participated in the march in New York City. During the class, my memory drifted back to the march; I have started to realize that perhaps the only way to democratize the future global changes we need – such as those needed to mitigate climate change – is to find a way for each of us to be able to personalize the issue.

Indeed, the march was incredibly successful in personalizing the issues. The march included meticulous organization, well-rehearsed chanted slogans and quite a few multi-use signs, but at the end, none of those were the real takeaway. Instead, there was a sense of recognition that this was a historic march that might really have an effect. Much of the focus seemed to be on having a good time, taking photographs of everything around you, and coming up with slogans and signs that highlighted significant and personal elements that need to change in order to modify our global behavior and prevent the dismantling of the planet that we all depend on.

I am including some of my own photos here for your enjoyment and you can find more in the links to the albums that I included in last week’s blog. 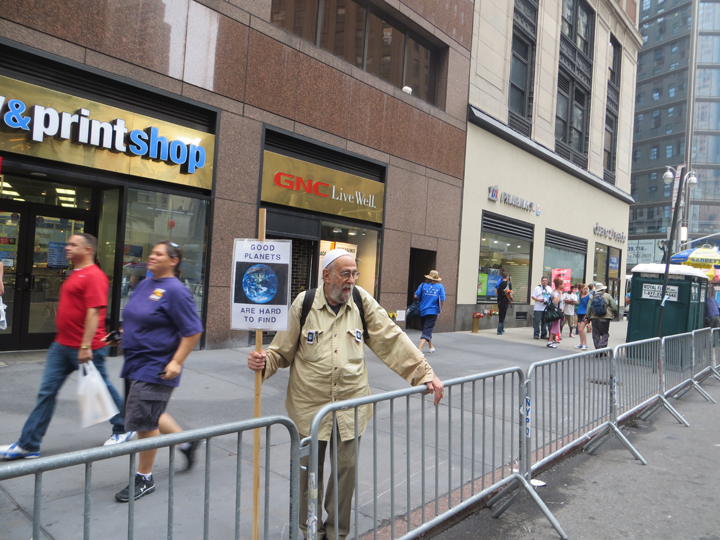 On his own, with a big message: “Good Planets Are Hard to Find” 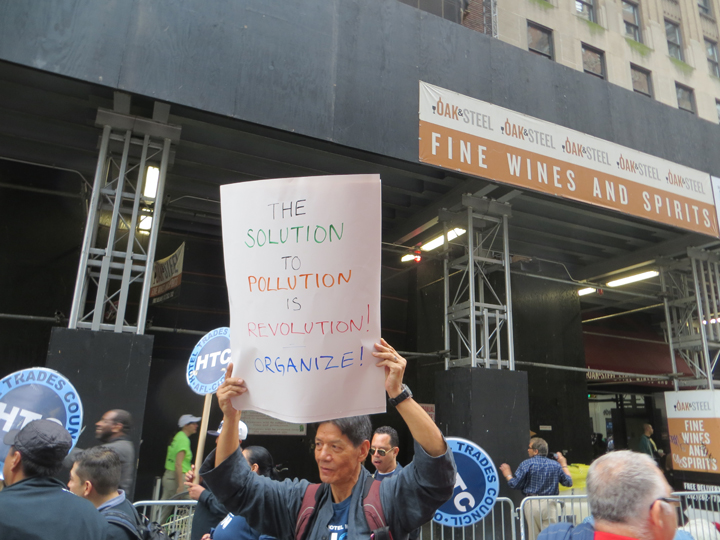 “The Solution to Pollution is Revolution – Organize” was a bit on the fringe but it rhymes. 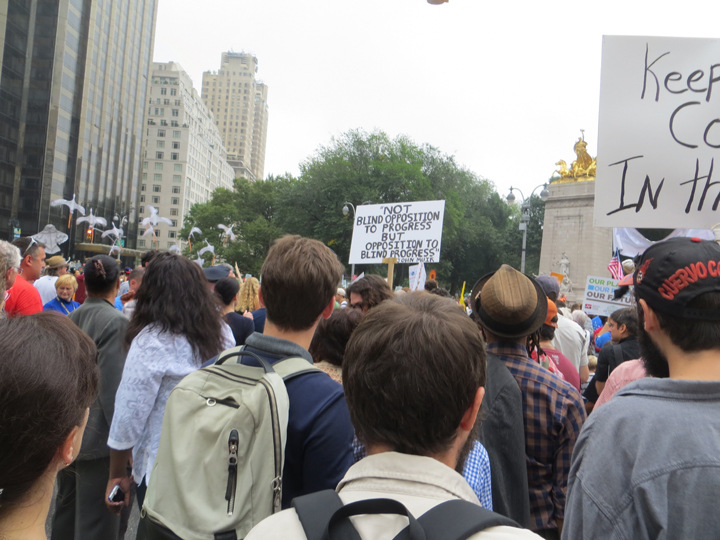 “Not Blind Opposition to Progress but Opposition to Blind Progress” Couldn’t have said it better, especially since it marched with the trade unions. 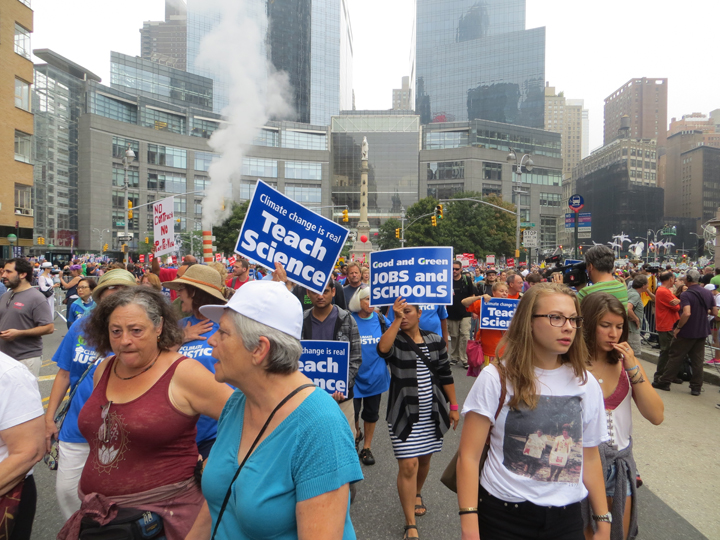 Science was at the center of the effort, and the emphasis on the need to “Teach Science” was everywhere. 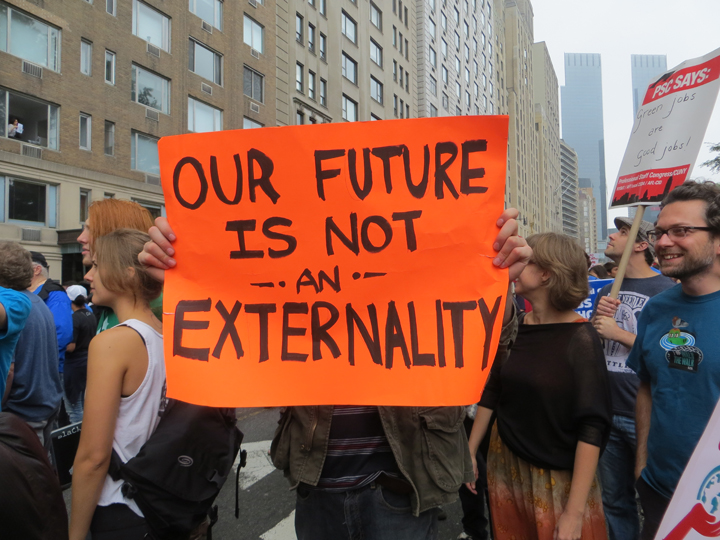 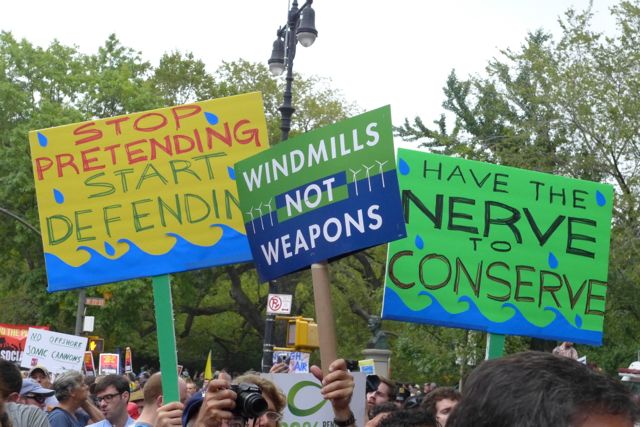 “Stop Pretending, Start defending,” “Windmills Not Weapons,” “Have the Nerve to Conserve.” (This photo, courtesy of my editor, Sonya Landau of LCG Communications)

Micha Tomkiewicz, Ph.D., is a professor of physics in the Department of Physics, Brooklyn College, the City University of New York. He is also a professor of physics and chemistry in the School for Graduate Studies of the City University of New York. In addition, he is the founding-director of the Environmental Studies Program at Brooklyn College as well as director of the Electrochemistry Institute at that same institution.
View all posts by climatechangefork →
This entry was posted in Climate Change and tagged Ban-Ki Moon, Climate Change, climatechange, decarbonize, deforestation, Democratization, Economics, Education, externality, Global, internality, Investment, NYC, Obama, People's Climate March, peoplesclimate, peoplesclimatemarch, personalize, Science, signs, UN, United Nations. Bookmark the permalink.

8 Responses to The World and Me