Posted on March 3, 2015 by climatechangefork

Last week, I looked at the IPAT identity and the conflict between striving for affluence and aiming to keep greenhouse gas emissions from energy use low. One of the graphs showed that of the 25 major countries presented, India has both the lowest GDP and energy use per person. The graph showed that the affluence (measured by GDP/person) is approximately proportional to the energy use. I also mentioned the filming of the short movie “Quest for Energy,” which described India’s efforts to provide electricity to an area in India that was not connected to the electrical grid. During the filming we asked some of the people that were directly affected (those in the Sundarbans region) whether or not they minded paying slightly higher prices for electricity compared to people on the “mainland” – the area around Kolkata (Calcutta). The people in the “mainland” get most of their electricity from coal. The hope in providing the electricity in the Sundarbans was to try to “skip” the coal stage. It turns out that this was a bit more expensive. The answer that we got was that actually, they would be delighted to get their energy from coal and pay less, provided that it would be a “clean” coal that doesn’t contribute to climate change. We basically had to end the chat at that point. It became useless to try to explain that there is no such thing as “clean” coal unless the carbon dioxide generated is being sequestered, a process that would make the coal considerably more expensive.

My last blog also described one “shade” of climate deniers – the “fatalists,” that don’t believe anything can be done to seriously reduce anthropogenic climate change because countries like India will never agree to sacrifice their quest for economic development for the sake of global sustainability. Admittedly, my “shading” of deniers mostly focuses on the US landscape. A valid question to ask is whether India shares this attitude.

There is no question that there are climate change deniers in India. However, India recently had major elections that resulted in a big change of government. The Bharatiya Janata Party under Narendra Modi was the big winner. It is especially notable that all the big contenders within the election have recognized that anthropogenic climate change is a major threat that India has to face together with the rest of the world. Here is how Worldwatch Institute summarized the political landscape:

Perhaps for the first time in India’s election history, both Congress and the BJP-the two leading contenders-give fairly significant mention to climate change and the environment in their manifestos.

The Congress party states that “climate change has now emerged as a serious challenge for the world community” and has committed to implementing its National Action Plan on Climate Change, released last June, “in letter and spirit.” Shyam Saran, India’s Special Envoy on Climate Change, noted in a recent statement in Washington, D.C., that “climate change has now been fully integrated into the development process” and that detailed national strategies will be released soon. The party has also indicated plans to better conserve the Ganges River Basin and to safeguard India’s biodiversity.

With regard to India’s energy security needs, Congress has announced plans to add at least 12,000-15,000 megawatts of capacity each year through a mix of sources, including coal, hydroelectricity, nuclear power, and renewable energy-although the pace of oil and gas exploration will also be intensified.

The BJP has outlined a fairly robust set of measures as well, stating that it will “pursue national growth objectives through an ecologically sustainable pathway that leads to mitigation of greenhouse gas emissions, recognising that containing global warming is essential to protecting [the] life and security of people and [the] environment.” The party also notes that “mitigating this threat by building a low carbon economy is the biggest economic opportunity of the 21st century.”

In terms of energy infrastructure, the BJP proposes investing heavily in non-fossil fuel clean energy sources, with a goal of adding at least 120,000 megawatts of power over the next five years, 20 percent of this from renewable sources. This amounts to a near-doubling of India’s currently installed energy capacity. The BJP manifesto also includes measures to create incentives for environmental education, energy efficiency, afforestation, wildlife conservation, and low-water, low-chemical, and high-diversity agriculture.

Rajendra Kumar Pachauri, a famous Indian scientist and administrator has served until very recently as head of the IPCC and was its main spokesman. He was the face of the organization when in 2007 the organization shared the Nobel Peace Prize with Al Gore.

The people in the Sundarbans region fully realize, as most Indian citizens do, that India is very vulnerable to the impacts of climate change. The monsoons are getting more intense on both the Indian and Bangladeshi sides of the Sundarbans. With these intense monsoons come more intense and more frequent flooding. With the sea level rise, shallow wells quickly become too salty for use and extraction of fresh water becomes much more difficult.

Figure 1 shows a climate vulnerability map; India, China and West Africa are noted as some of the most vulnerable regions. They are also among the world’s poorest and most populated regions. Most of these regions cannot afford adaptation through expensive construction. In many cases, the best solution that they can offer is to let affected people to try to move from the most vulnerable coastal region to the interior as climate refugees. 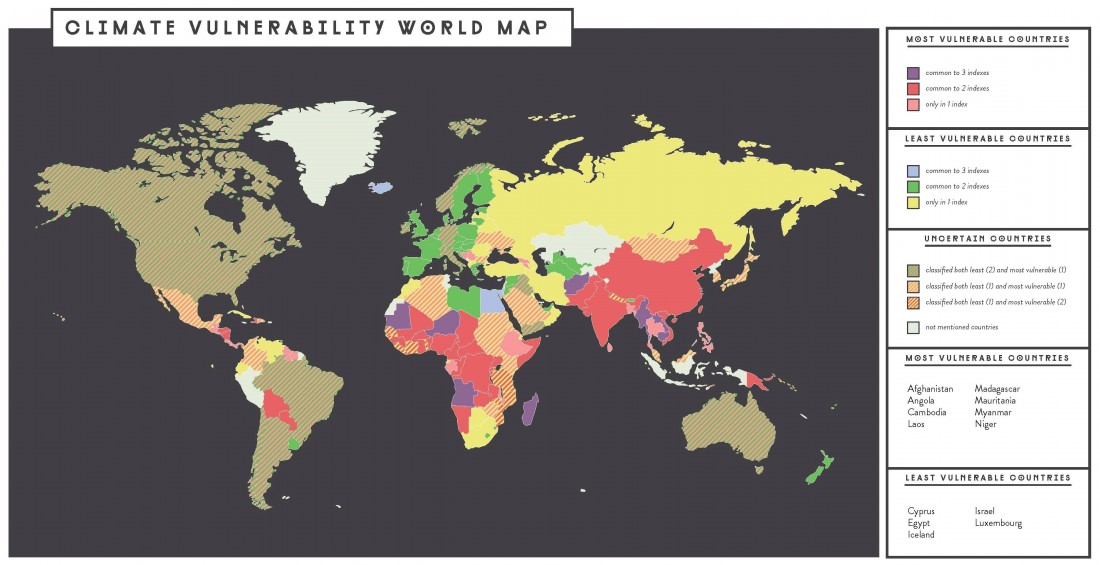 In spite of all this, Figure 2, a global map of countries’ actions and commitments on climate change, clearly shows that India and China are among the most committed.

In the next two weeks I will focus on the specific challenges that India faces in its energy use and the actions that the country is taking to mitigate its contributions to greenhouse gas emissions.

Micha Tomkiewicz, Ph.D., is a professor of physics in the Department of Physics, Brooklyn College, the City University of New York. He is also a professor of physics and chemistry in the School for Graduate Studies of the City University of New York. In addition, he is the founding-director of the Environmental Studies Program at Brooklyn College as well as director of the Electrochemistry Institute at that same institution.
View all posts by climatechangefork →
This entry was posted in Climate Change and tagged 3 shades, action, Bangladesh, China, Clean Energy, Climate Change, Climate Change Denial, Climate Change Deniers, Climate Skeptics, climate vulnerability, Coal, commitment, Democratization, DNNer, Economics, Electricity, Emissions, Energy, Environment, Fatalists, Fossil Fuels, Global Warming, greenhouse gas, India, IPAT, IPCC, Mitigation, Pachauri, Population, Power, Quest For, Science, Solar Energy, Sundarbans, Sustainability, Technology, US. Bookmark the permalink.