Posted on March 10, 2015 by climatechangefork

Today I will focus on India’s current energy use and the policy decisions that are associated with its energy needs. Next week I will focus on future plans with an emphasis on mitigation and adaptation to climate change. This should provide all of us with a decent background to try to anticipate India’s “vote” in the coming 2015 Paris global meeting where nations around the world will try to draft a worldwide plan to achieve these objectives.

I will start with data about India’s present (2012) energy use and its self-sufficiency in providing enough energy to fuel its development aspirations. Figure 1 shows the 2012 energy mix and Figure 2 shows the trend in energy production and energy consumption over the last 20 years. Production is constant over this period, but consumption tripled to fuel economic growth. Such a trend is an obvious recipe for instability. 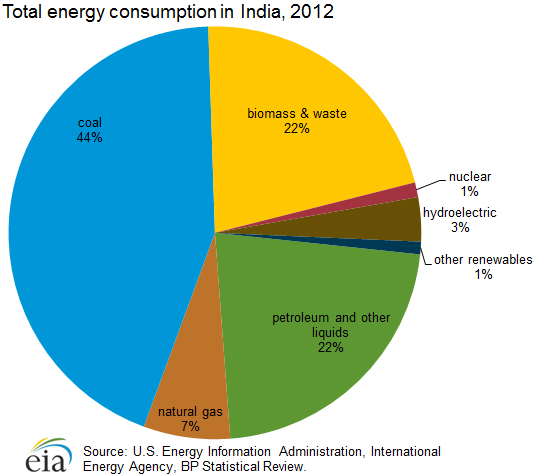 The key realities that India is trying to address are summarized below:

Of the 1.4 billion people of the world who have no access to electricity in the world, India accounts for over 300 million. The International Energy Agency estimates India will add between 600 GW to 1,200 GW of additional new power generation capacity before 2050.[15] This added new capacity is equivalent to the 740 GW of total power generation capacity of European Union (EU-27) in 2005. The technologies and fuel sources India adopts, as it adds this electricity generation capacity, may make significant impact to global resource usage and environmental issues.[16]

Some 800 million Indians use traditional fuels – fuelwood, agricultural waste and biomass cakes – for cooking and general heating needs. These traditional fuels are burnt in cook stoves, known as chulah or chulha in some parts of India.[17][18] Traditional fuel is inefficient source of energy, its burning releases high levels of smoke, PM10 particulate matter, NOX, SOX, PAHs, polyaromatics, formaldehyde, carbon monoxide and other air pollutants.[19][20][21] Some reports, including one by the World Health Organisation, claim 300,000 to 400,000 people in India die of indoor air pollution and carbon monoxide poisoning every year because of biomass burning and use of chullahs.[22] Traditional fuel burning in conventional cook stoves releases unnecessarily large amounts of pollutants, between 5 to 15 times higher than industrial combustion of coal, thereby affecting outdoor air quality, haze and smog, chronic health problems, damage to forests, ecosystems and global climate. Burning of biomass and firewood will not stop, these reports claim, unless electricity or clean burning fuel and combustion technologies become reliably available and widely adopted in rural and urban India. The growth of electricity sector in India may help find a sustainable alternative to traditional fuel burning.

The International Energy Agency (IEA) mentioned has written an assessment of India’s present energy policy with the following pessimistic conclusion:

“India’s energy sector is increasingly unable to deliver a secure supply of energy amid growing demand and fuel imports.”

From there it proceeds to describe the policy objectives:

First, access to energy is the foremost goal in India’s energy policy making, as nearly one-quarter of the population lacks access to electricity. This implies ensuring the supply of adequate and reliable energy to the Indian population amid growing energy demand, bolstered by economic growth.

Finally, India is dedicated to the mitigation of climate change, although overcoming energy poverty and ensuring economic and social development remains a top priority.

As the IEA notes, there are often conflicts between the objectives. Here is what they write about energy access and energy security:

Nearly one-quarter of the population of India lacks access to electricity. It is important to understand this peculiarity of India’s energy situation where the majority of potential energy demand still remains unmet, unlike most developed countries where energy demand has reached or is close to saturation stage. The Indian government recognized that economic development is being hindered as a consequence of energy poverty. Thus, providing energy access to its entire population has been a top priority of Indian policy makers for a long time, making it equally or even more important than energy security. India’s major rural electrification scheme is an example of the government’s determination to expand access to electricity in India’s rural villages.

Energy security takes a central position in government policy making. The emphasis of energy policy until the 1990s was on electricity shortage and unsatisfied energy needs. However, increasing dependence on imported energy sources, mainly oil, but also natural gas and coal, resulted in greater government attention to the subject. Energy security is defined comprehensively in India, as “we are energy secure when we can supply lifeline energy to all our citizens irrespective of their ability to pay for it as well as meet their effective demand for safe and convenient energy to satisfy their various needs at competitive prices, at all times and with a prescribed confidence level considering shocks and disruptions that can be reasonably expected” (PC, 2006).

From this definition, India’s concern for energy security is threefold: First, India asserts that energy is a lifeline to all citizens, which should be factored into its energy security strategy. Second, India is anxious about sudden increases in global energy prices as they undermine the availability of energy to its people and exacerbate the national financial burden. Finally, there is a concern about possible abrupt supply disruption, which has led to efforts to diversify supply and fuel and acquire overseas assets.

It should be interesting to figure out how this reality maps into concern and action to meet the global demand to mitigate against climate change. We will have to wait until next week to address this matter.

Micha Tomkiewicz, Ph.D., is a professor of physics in the Department of Physics, Brooklyn College, the City University of New York. He is also a professor of physics and chemistry in the School for Graduate Studies of the City University of New York. In addition, he is the founding-director of the Environmental Studies Program at Brooklyn College as well as director of the Electrochemistry Institute at that same institution.
View all posts by climatechangefork →
This entry was posted in Climate Change and tagged Adaptation, Clean Energy, Climate Change, Economics, Electricity, Emissions, Energy, energy security, Environment, fuel, IEA, India, Mitigation, Oil, Policy, Pollution, Power, Sustainability. Bookmark the permalink.