India – Lighthouse for the IPAT

Posted on February 24, 2015 by climatechangefork

India is “hot” now. I just got the recent issue of The Economist (February 21st), whose cover features a personification of India, riding high on a very attractive elephant that has a jet engine strapped to its side. With most of the world in some sort of stagnation, India, with its newly elected Prime Minister (Narendra Modi), is leading the way in economic growth among the large developing countries. The US, meanwhile, is in a very strong position among the large developed countries. President Obama visited India last month and met with Modi and other Indian officials. They have agreed to cooperate on the development and implementation of sustainable energy sources but – unlike with China – did not make any specific commitments. The main reason for this is that climate change is only one of the major concerns that India has in terms of its energy policy; until India can find satisfying solutions that balance these concerns, it cannot securely commit itself to any global agreements on energy use.

Given the pending December 2015 meeting in Paris, where many hope to finally get global commitments to take efforts to mitigate climate change, these meetings go a long way toward giving the world confidence that these commitments will not only be made, but also followed.

A few years ago (September 3, 2012), I described what I called, “Three Shades of Deniers.” Of these, the following is the one that concerns me most, especially because it includes some very good scientists:

The fatalists. This group fully agrees with both the science and its predicted impact, but believes that since the task of preventing it is so enormous as to be practically undoable, they might as well enjoy life for as long as it lasts. Unfortunately, many in this group are good scientists.

The first example that most of these “fatalists” bring up is India. I was focused on India’s efforts to balance between the pressing needs to alleviate poverty and mitigate anthropogenic contributions to climate change for many years. Many of these efforts can be quantified through the IPAT identity (November 26, 2012 blog): 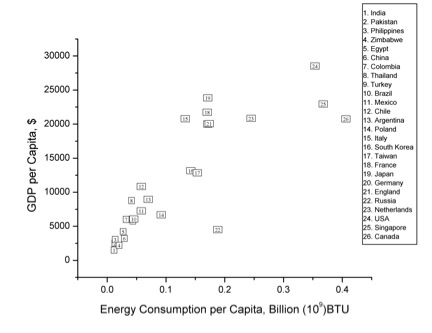 Since my paper with Ostrovskiy and Cheng is now published in a refereed professional journal, my focus has shifted to India, which, as I showed in the previous blog, is a somewhat more difficult, example. India is poorer than China. It’s also a democratic country, meaning that the issue shifts from trying to convince governments to take a certain action to trying to convince voters in a fast growing population that already numbers over a billion people.

The IPAT is not just a “formula.” It actually describes the driving forces for the anthropogenic contributions to climate change. 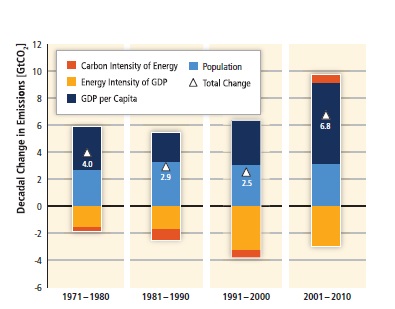 A few years ago I went to India to try to see the balancing act for myself. Here is what I wrote about this effort (April 29, 2014):

The film illustrates the initial delivery of electricity in the small town of Gosaba. This delivery comes by way of a microgrid that runs through some of the main streets in town. Here, the microgrid doesn’t function as an additional, supplemental aspect of the main grid. In fact, since in this case, the microgrid is the only grid, in a sense, it resembles the main grid in the US more than 100 years ago. The proliferation of microgrids in rich countries is a boon to developing countries like India because it promotes further exploration and improvement of such technology. Hopefully these innovations will continue to be applicable not only in rich countries, where the microgrids function mostly as a form of adaptation, but also in poor countries where in many regions they are the only game in town.

Figure 3, taken from a 2002 seminar on energy and poverty reduction at the World Summit for Sustainable Development, shows the global access to electricity and reliance on biomass for energy use.

The same seminar documents describe how India’s inhabitants fit in to the world’s access to and use of electricity as follows:

The next few blogs will continue my discussion of India, as I describe the country’s present energy situation and its efforts toward energy transition. I also plan to address the difficult balance it strives for between reducing its energy needs overall while also recognizing that some energy expenditure is necessary in its attempts to alleviate poverty.

Micha Tomkiewicz, Ph.D., is a professor of physics in the Department of Physics, Brooklyn College, the City University of New York. He is also a professor of physics and chemistry in the School for Graduate Studies of the City University of New York. In addition, he is the founding-director of the Environmental Studies Program at Brooklyn College as well as director of the Electrochemistry Institute at that same institution.
View all posts by climatechangefork →
This entry was posted in Climate Change and tagged Adaptation, Chen, China, Clean Energy, Climate Change, Climate Change Denial, Climate Change Deniers, Climate Skeptics, DNNer, Economics, Electricity, Energy, Global Warming, India, IPAT, IPCC, Microgrids, Mitigation, Ostrovskiy, Population, Quest for Energy, Sustainability, Technology. Bookmark the permalink.

9 Responses to India – Lighthouse for the IPAT