Let There be Light!

Posted on March 28, 2017 by climatechangefork

*Special note: I will stress that this blog pertains to my own reading/interpretation of the book described, but after hearing feedback from my friend, the author, I have made a few minor edits and added explanations.

In last week’s blog I wrote:

Clearly, for the foreseeable future, top-down problem solving will not provide much support for many of our national and global woes, and will need to be strongly supplemented by massive bottom-up endeavors. My focus here will shift to reflect that change.

What I meant to say was that we must not only shift our emphasis from top-down to bottom-up efforts but, even more importantly, look for specks of light amidst our dark perspectives, with the hope that light will overtake darkness.

The darkness will not end soon but the hope is that in a democratic society, necessities often win changes in the right direction.

As it happened I was reading a new book along these lines that plays out in a completely different setting. My Israeli high school friend, Relli Robinson, wrote it in Hebrew. I read the original version and just finished reading the recently published English translation, titled Raking Light from Ashes. 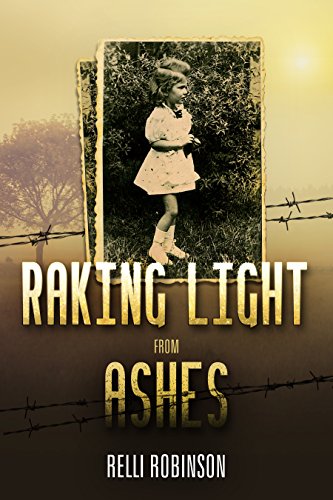 Here’s Amazon’s description of the book:

Lala, a young Jewish girl, loses her entire family during the dark days of the Holocaust in the Warsaw Ghetto. Thanks to the kindness of a Polish family, Lala manages to survive the war, taking on an assumed identity. By a twist of good fortune and unbelievable coincidence, she is found after the war and eventually immigrates to Israel in 1950 to live with her Israeli relatives.

Lala is Relli and the book is a semi-autobiography based on a combination of her own dredged up memories and stories told by adults from a previous generation, who actively participated in the events. It also allludes to the detailed diary of an Israeli woman who worked at the Israeli embassy in Poland and was instrumental in getting Lala back to her original family and restoring her Jewish identity as Relli (According to the author, while Tzipora Neshem was a real person, she did not write a journal; instead, Relli Robinson used this as a literary device to effectively convey her changing identity). The ashes in the title refer to the victims of the Holocaust, including Relli’s parents; the light represents almost everybody else connected with this adventure. She especially highlights the childless Polish couple that agreed to raise her after she was smuggled out of the Warsaw Ghetto in 1943. They kept her as their Polish daughter for the rest of the war and – in spite of great ambivalence – assisted in repatriating her to Israel, reuniting her with a branch of her family fortunate enough to have emigrated there before the war, thus surviving the Holocaust.

My own life was saved in a similar set of circumstances by a Polish family that I love and maintain a close family relation with. The main difference compared to Relli’s experience, as I highlighted in my first blog (April 22, 2012), was that my mother and uncle survived with me and were able to take care of me throughout the process.

Relli’s experience, my experience and those of many others signified pinpoints of light in the depth of one of the darkest periods of history. For much of history, the stories of the ashes have dominated those of the specks of light but both are inescapable parts of our collective past.

Presently, the light is trying to minimize the future mountains of ash that will result from what I am calling self-inflicted genocide (May 14, 2012). We are not trying to rake light from the ashes but rather attempting to win the battle, forestalling their formation.

This is a fight for survival in a world that is now defined by what we do to our environment and its resulting response, until – in the not so distance future – we make the planet unsuited for human life and have no other place to go.

The US is playing a key role in this fight, but it seems that we have been backsliding since the inauguration of the new administration. I have detailed some of these early steps backward. But those changes pale in comparison to some that are still to come:

The moves are intended to send an unmistakable signal to the nation and the world that Mr. Trump intends to follow through on his campaign vows to rip apart every element of what the president has called Mr. Obama’s “stupid” policies to address climate change. The timing and exact form of the announcement remain unsettled, however.

The executive actions will follow the White House’s release last week of a proposed budget that would eliminate climate change research and prevention programs across the federal government and slash the Environmental Protection Agency’s budget by 31 percent, more than any other agency. Mr. Trump also announced last week that he had ordered Scott Pruitt, the E.P.A. administrator, to revise the agency’s stringent standards on planet-warming tailpipe pollution from vehicles, another of Mr. Obama’s key climate change policies.

While the White House is not expected to explicitly say the United States is withdrawing from the 2015 Paris Agreement on climate change, and people familiar with the White House deliberations say Mr. Trump has not decided whether to do so, the policy reversals would make it virtually impossible to meet the emissions reduction goals set by the Obama administration under the international agreement.

What makes the situation a bit frightening is that we are also closing most of the research venues that are focused on the development of new technologies that would help make the transition without sacrificing many of the comforts that we enjoy today.

Here is the scientific journal Nature’s take on the anticipated moves:

When it comes to science, there are few winners in US President Donald Trump’s first budget proposal. The plan, released on 16 March, calls for double-digit cuts for the Environmental Protection Agency (EPA) and the National Institutes of Health (NIH). It also lays the foundation for a broad shift in the United States’ research priorities, including a retreat from environmental and climate programmes.

“Cutting [research and development] funding from our budget is the same as cutting the engines off an airplane that’s too heavy for take-off,” says Jason Rao, director of international affairs at the American Society for Microbiology in Washington DC. The greatest threats to the United States, he says, are those presented by infectious diseases, climate change and energy production — none of which can be addressed effectively without scientific research.

The White House proposal is also notable for what it does not mention. The barebones document omits detail about many programmes and even entire agencies, including the National Science Foundation (NSF). The president is expected to release a fuller budget request in May.

The biggest swing of the budget axe — across the entire budget plan — is aimed at the EPA. The White House hopes to slash the agency’s US$8.2-billion budget by 31%, and lay off about 3,200 of the agency’s 15,000 staff. The EPA’s Office of Research and Development would have its funding reduced by half, from $483 million to $250 million.

The proposed cuts, combined with the Trump administration’s hostility toward climate and environmental regulations, have sparked fear throughout the agency. “President Trump is always talking about creating jobs, but he is talking about cutting 3,000 people at the EPA,” says one EPA biologist who is not authorized to talk to the press. “He doesn’t even blink an eye.”

The White House wants to cut 5.6%, or $1.7 billion, from the Department of Energy (DOE). The plan would eliminate the Advanced Research Projects Agency-Energy, which funds ‘high-risk, high-reward’ research. And it would slash $900 million, or about 20%, from the department’s Office of Science, which supports research on topics such as high-energy physics, energy, climate change and biology.

“Cutting the NIH and the DOE this dramatically is surprising,” says Matthew Hourihan, director of research-and-development budget and policy programme at the American Association for the Advancement of Science in Washington DC. “These are basic science agencies, and there tends to be bipartisan agreement on their value.”

The Trump plan does not include an overall funding target for the National Oceanic and Atmospheric Administration (NOAA). But it would eliminate the agency’s long-running, $73-million Sea Grant programme, which supports 33 US colleges and universities that conduct research, education and training about ocean and coastal topics.

In the next few blogs I will try to follow Relli’s example and rake the ashes in search of light. Wish me well.