Posted on June 6, 2017 by climatechangefork

Aside from that small discrepancy from reality, the speech was an astronomical declaration that the US is an isolated planet unaffected by anything that happens around it. Strangely, there was not a word in the speech about the future. Last week’s blog focused on the conflict between globalism and nationalism. I wrote there that “Me” and “Them” are very well defined. “We” includes me but needs an additional description of the collective that is being referring to. I am especially interested in where we position our family members and friends on this spectrum. In my book (Climate Change: The Fork at the End of Now), I defined “Now” in terms of the expected life span of my grandchildren, which approximately brings me to the end of the century.

Well, President Trump is thinking about his youngest son Barron. He reacted swiftly to the comedian Kathy Griffin’s awful exhibition of holding what appeared to be the president’s decapitated bloody head. The act immediately raised strong objections from everybody, irrespective of political affiliation. Ms. Griffin apologized and lost her job with CNN and had to cancel other performances. President Trump responded with the following tweet: 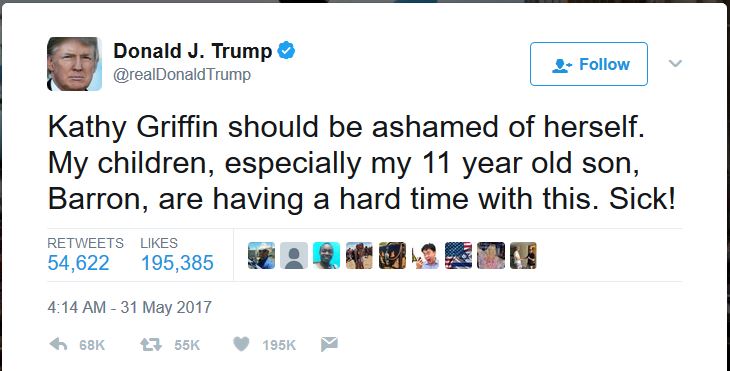 He was right. Except that he forgot to mention his eight grandchildren (not yet including Eric and Lara’s expected new baby). In his speech on Thursday, in which he removed the US from the Paris Agreement, there was plenty of “America First” rhetoric, implying that the rest of the world can go to hell. He said nothing at all, however, about the future that his youngest son and eight grandchildren can expect – especially if they reside in coastal cities as America and the world drown.

The American people do not share Trump’s cavalier neglect of the future – especially one that might directly affect their families. Recent Gallup polls show the numbers:

President Trump didn’t try to debunk the science of climate change in his speech. So in a sense he didn’t try to deny the future that “business as usual” scenarios will bring to us all. He was basically saying, as I understand him, that 60 or so million out of a US population of 330 million voted him in on his promise to extract the US from the Paris Agreement, so he is delivering on that promise. Barron and his eight grandchildren, and the hundreds of millions that will join them toward the end of the century, didn’t have the option to vote – too bad – they will be the ones to bear the consequences. His daughter, Ivanka, mother of three of his grandchildren, tried in vain to persuade Mr. Trump to remain in the Paris Agreement.

Well, if we cannot do anything to mitigate climate change, who can? A few of President Trump’s supporters have an answer:

The 66-year-old Republican, who is a climate change skeptic, made the remark at a town hall in Coldwater, Michigan, on Friday.

“Why do I believe that?” he went on. “Well, as a Christian, I believe that there is a creator in God who is much bigger than us. And I’m confident that, if there’s a real problem, he can take care of it.” 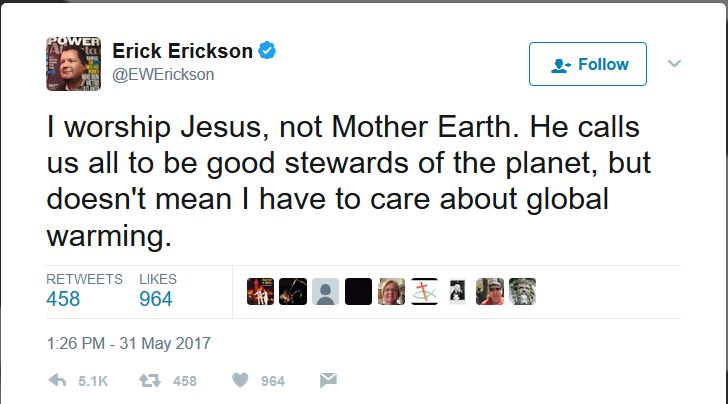 On the other side of the world, the dynamics in Australia are a bit different. Apparently, the disparity in attitude toward climate change is generational:

SPRING RIDGE, Australia — Mark Coulton and his daughter, Claire, both believe there is a future in rural living. They are both active members of Australia’s National Party, which traditionally represents farmers and voters outside the main cities who lean conservative, and they agree on most things — but not on how to deal with climate change.

Mr. Coulton, 59, thinks measures like carbon trading are “symbolic things that really won’t have any impact.” Claire Coulton, 33, supports carbon trading as a means of reducing greenhouse gas emissions and worries that Australia’s economic dependence on coal could undermine her future.

“I think it’s something all young people should be looking at with real interest,” she said, “because if there are negative effects of opening up that coal mine, our generation will be the one to bear the brunt of it.”

The elder Coulton is a lawmaker in the Australian Parliament, representing the electoral division of Parkes in New South Wales, and his daughter belongs to the party’s youth wing, but their disagreement is not limited to family debate. Last month, the regional youth wing, the NSW Young Nationals, including Ms. Coulton, went against party leaders at an annual meeting and voted to endorse a plan that would place a cost on emissions, known as an emissions intensity plan.

President Trump’s withdrawal speech last Thursday is a good focal point for the choices that we all must make in prioritizing the benefits for Me vs. Them vs. We, so I will do away with this awkward title for the next few blogs and instead look into the ramifications of the president’s departure from the Paris Agreement. I will address his emphasis on the Green Climate Fund, which he depicted negatively as a program for massive wealth redistribution. I will also speak to his emphasis on ramping back up our use of coal-powered energy as a means of bringing back coal mining jobs and his depiction of the Paris Agreement as a detriment to that goal. I will go on to enumerate the probable impacts of our withdrawal from the accord. Probably the most important aspect will be revisiting the issue of global wealth distribution as it ties in to any attempt to mitigate human contributions to climate change.

All of these are predicated on what might be a faulty belief that he now “suspects” that humans are important contributors to climate change. This might be a stretch given that he made no such mention in his speech.