Posted on June 20, 2017 by climatechangefork 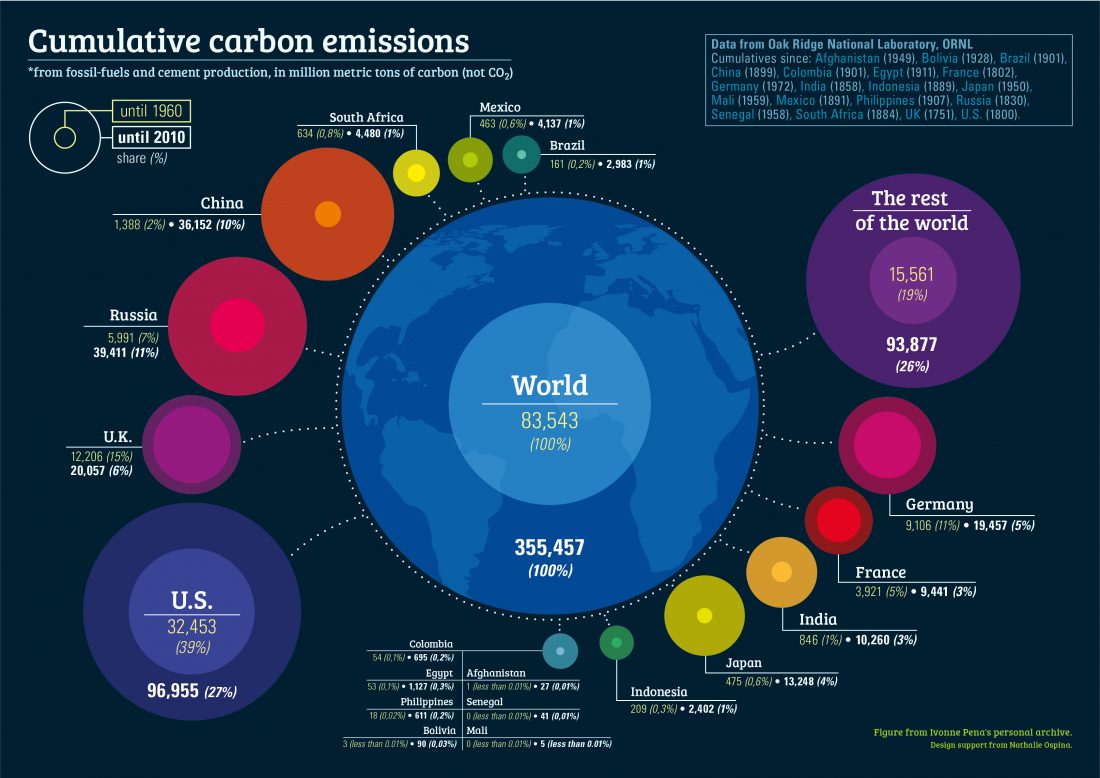 In his exit speech from the Paris Agreement on Thursday, June 1st (see the previous two blogs), President Trump characterized the parts of the agreement that call for developed countries to help pay for climate change mitigation and adaptation efforts in developing countries as ridiculous. He said that our participation makes the United States a laughingstock. He also referred to the transition toward sustainable energy sources as an excuse for allowing more American coal miners to lose their jobs while their Indian and Chinese counterparts benefit. The next three blogs will focus on these claims as well as his repeated motto of “America First” and his assertion that he was elected by Pittsburg and not by Paris (the inaccuracy of which I have already pointed out). I will quote the relevant parts of the speech in order to avoid the common pitfall of cherry picking factual information that fits with my argument.

I will start here with the aspect of monetary distribution:

This agreement is less about the climate and more about other countries gaining a financial advantage over the United States. The rest of the world applauded when we signed the Paris Agreement — they went wild; they were so happy — for the simple reason that it put our country, the United States of America, which we all love, at a very, very big economic disadvantage. A cynic would say the obvious reason for economic competitors and their wish to see us remain in the agreement is so that we continue to suffer this self-inflicted major economic wound. We would find it very hard to compete with other countries from other parts of the world.

The agreement is a massive redistribution of United States wealth to other countries. At 1 percent growth, renewable sources of energy can meet some of our domestic demand, but at 3 or 4 percent growth, which I expect, we need all forms of available American energy, or our country (Applause) will be at grave risk of brownouts and blackouts, our businesses will come to a halt in many cases, and the American family will suffer the consequences in the form of lost jobs and a very diminished quality of life.

The Paris Agreement handicaps the United States economy in order to win praise from the very foreign capitals and global activists that have long sought to gain wealth at our country’s expense. They don’t put America first. I do, and I always will.  (Applause)

Beyond the severe energy restrictions inflicted by the Paris accord, it includes yet another scheme to redistribute wealth out of the United States through the so-called Green Climate Fund — nice name — which calls for developed countries to send $100 billion to developing countries all on top of America’s existing and massive foreign aid payments. So we’re going to be paying billions and billions and billions of dollars, and we’re already way ahead of anybody else. Many of the other countries haven’t spent anything, and many of them will never pay one dime.

The Green Fund would likely obligate the United States to commit potentially tens of billions of dollars of which the United States has already handed over $1 billion — nobody else is even close; most of them haven’t even paid anything — including funds raided out of America’s budget for the war against terrorism. That’s where they came. Believe me, they didn’t come from me.  They came just before I came into office.  Not good.  And not good the way they took the money.

In 2015, the United Nation’s departing top climate officials reportedly described the $100 billion per year as “peanuts,” and stated that “the $100 billion is the tail that wags the dog.”  In 2015, the Green Climate Fund’s executive director reportedly stated that estimated funding needed would increase to $450 billion per year after 2020.  And nobody even knows where the money is going to.  Nobody has been able to say, where is it going to?

Of course, the world’s top polluters have no affirmative obligations under the Green Fund, which we terminated. America is $20 trillion in debt. Cash-strapped cities cannot hire enough police officers or fix vital infrastructure. Millions of our citizens are out of work. And yet, under the Paris accord, billions of dollars that ought to be invested right here in America will be sent to the very countries that have taken our factories and our jobs away from us. So think of that.

In his speech, president Trump treats all countries as equal parties to deals, regardless of their size – Vatican City is tiny, the island of Nauru has 9,488 inhabitants and China has close to 1.4 billion people (close to 20% of the world population).

Well, the United States under Trump administration cannot be “the most environmentally friendly country on Earth with the cleanest air and water. You cannot build a wall around our air or water. Pollutants don’t recognize national boundaries; they spread around and spread fast. Climate change is a global issue.

Figure 1 at the top of this blog depicts the global accumulation of carbon emissions since 1960. The Unites States’ share of those emissions is close to 40% even though our population makes up only about 4.5% of the worldwide total. But, some might say, this is history – who cares? What about the future? Figure 2 illustrates the future, taking into account the commitments of the Paris Agreement. These projections were made by the US Energy Information Administration (EIA). In 2040, one generation from now, countries that do not belong to the Organisation for Economic Co-operation and Development (OECD), what President Trump calls the “poor countries” are projected to put out close to 70% of the emissions. 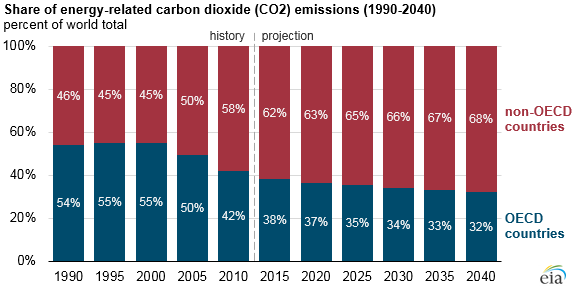 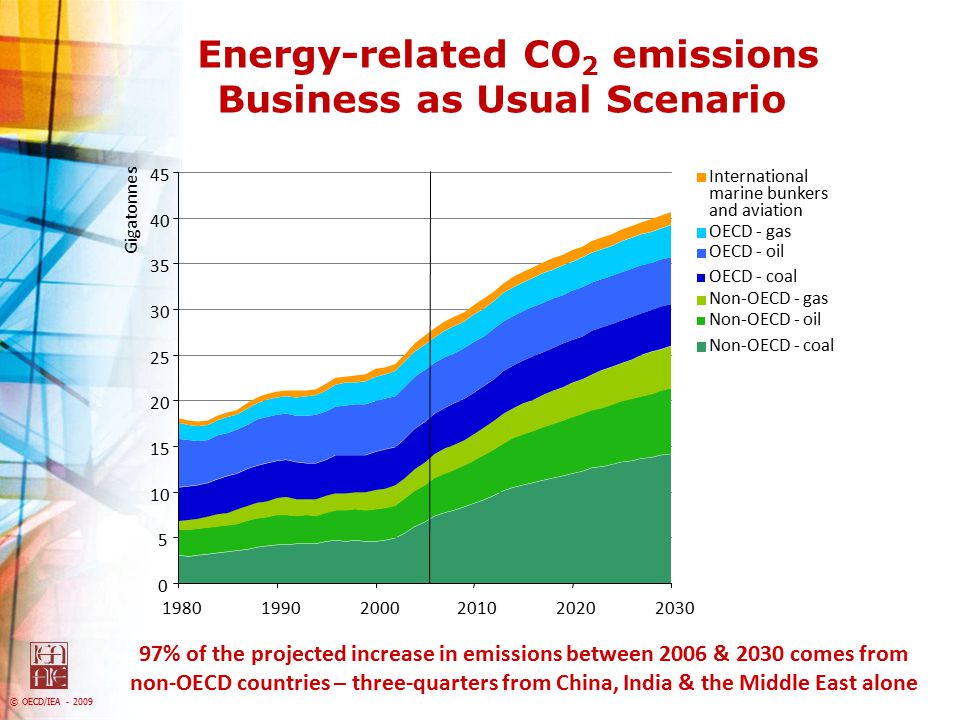 Short of war, how could a country like India – with a GDP/capita 30 times smaller than the United States’ and about quarter of its 1.4 billion people not connected to the electrical grid – be persuaded not to use its cheapest, most abundant energy source – coal? The financial help that President Trump so strenuously objects to is designed to provide India and other developing countries with the fiscal incentives to do just that. Without these incentives, developing countries will continue to use dirty fuel as needed as they attempt to bring their people out of poverty. President Trump’s efforts will not be able to prevent Americans, along with the rest of the word, from bearing the full brunt of unchecked climate change.

The organization that was put in charge of this effort is the Green Climate Fund:

The Green Climate Fund (GCF) is a fund established within the framework of the UNFCCC to assist developing countries in adaptation and mitigation practices to counter climate change. The GCF is based in the new Songdo district of Incheon, South Korea. It is governed by a Board of 24 members and initially supported by a Secretariat.

The objective of the Green Climate Fund is to “support projects, programmes, policies and other activities in developing country Parties using thematic funding windows”.[1] It is intended that the Green Climate Fund be the centre piece of efforts to raise Climate Finance under the UNFCCC, and raise $100 billion a year by 2020.

U.S. President Donald Trump in his announcement of U.S. withdrawal from the Paris Agreement on June 1, 2017, also criticized the Green Climate Fund, calling it a scheme to redistribute wealth from rich to poor countries.[4]

U.S. President Obama committed the US to contributing US$3 billion to the fund. In January 2017, in his final 3 days in office, Obama initiated the transfer of a second $500m installment to the fund, leaving $2 billion owing. Incoming President Trump was not expected to make further contributions.[14]

As of June 2017, the Green Climate Fund has raised USD 10.3 billion in pledges from 43 state governments. The objective is for all pledges to be converted into contribution agreements within one year from the time at which they are made. I hope that happens.