Posted on April 10, 2018 by climatechangefork

Last week’s blog looked at one of the biggest vulnerabilities that anthropogenic climate change has already produced: the dislocation of people from land that is no longer inhabitable. The dislocated people either try to move to safer locations within their countries of origin and become internally displaced persons or cross national borders and become refugees:

An internally displaced person (IDP) is someone who is forced to flee his or her home but who remains within his or her country’s borders. [2] They are often referred to as refugees, although they do not fall within the legal definitions of a refugee.[3]

A refugee, generally speaking, is a displaced person who has been forced to cross national boundaries and who cannot return home safely (for more detail see legal definition). Such a person may be called an asylum seeker until granted refugee status by the contracting state or the UNHCR[2] if they formally make a claim for asylum.[3]

I also provided some key global data indicating that natural disasters are the dominant driving forces for such displacements – far exceeding escape from violence. This is true in spite of the increasing coverage of/attention to those fleeing from the horrific situations in Syria, Yemen, and countries in Africa, as well as the plight of the Rohingya in Myanmar. Most of the natural disasters driving people from their homes are amplified by climate change and are expected to worsen in terms of geographic scope and the number of people directly impacted. US intelligence has shown interest in this growing trend of displacement and considers it a major security risk.

One of the countries at the forefront of this exodus – both with regard to climate and violence – is Syria. Credible accounts and data indicate that the civil war that has been raging for the last seven years originated with the government’s inability to handle the severe impacts of an ongoing drought. Climate change-driven environmental disasters have major political fallout.

Figure 1 shows a global account of the refugee population. The number, which reached its lowest point of roughly 13 million in 2005, has almost doubled since then. 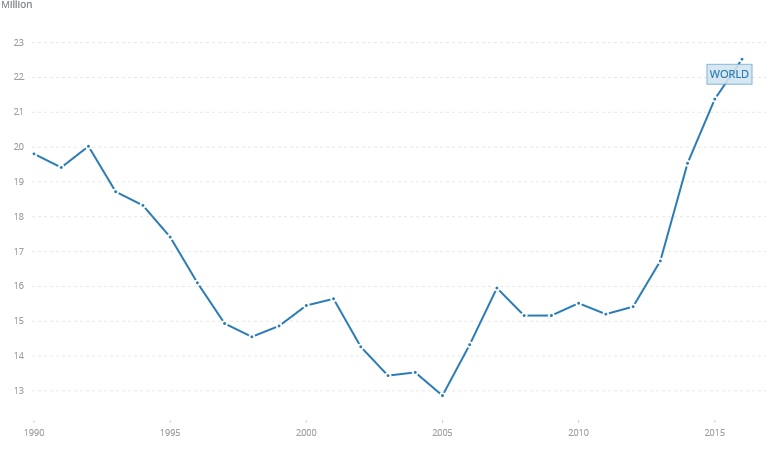 Tables 1 and 2 catalog the countries with the most refugees and internally displaced persons. Most of the refugees in Table 1 are fleeing violence. Table 2 includes more people escaping natural disasters.

You can see the full data about the original conflicts and disasters that people were escaping in the CIA World Factbook.

I will follow with the most detailed account I have found of the environmental origins of the raging Syrian conflict. It was published in one of the most prestigious scientific journals, the “Proceedings of the Natural Academy of Sciences” (PNAS March 17, 2015. 112 (11) 3241-3246):

Connection between environmental causality and violence causality: The Syrian example:

There is evidence that the 2007−2010 drought contributed to the conflict in Syria. It was the worst drought in the instrumental record, causing widespread crop failure and a mass migration of farming families to urban centers. Century-long observed trends in precipitation, temperature, and sea-level pressure, supported by climate model results, strongly suggest that anthropogenic forcing has increased the probability of severe and persistent droughts in this region, and made the occurrence of a 3-year drought as severe as that of 2007−2010 2 to 3 times more likely than by natural variability alone. We conclude that human influences on the climate system are implicated in the current Syrian conflict.

Before the Syrian uprising that began in 2011, the greater Fertile Crescent experienced the most severe drought in the instrumental record. For Syria, a country marked by poor governance and unsustainable agricultural and environmental policies, the drought had a catalytic effect, contributing to political unrest. We show that the recent decrease in Syrian precipitation is a combination of natural variability and a long-term drying trend, and the unusual severity of the observed drought is here shown to be highly unlikely without this trend. Precipitation changes in Syria are linked to rising mean sea-level pressure in the Eastern Mediterranean, which also shows a long-term trend. There has been also a long-term warming trend in the Eastern Mediterranean, adding to the drawdown of soil moisture. No natural cause is apparent for these trends, whereas the observed drying and warming are consistent with model studies of the response to increases in greenhouse gases. Furthermore, model studies show an increasingly drier and hotter future mean climate for the Eastern Mediterranean. Analyses of observations and model simulations indicate that a drought of the severity and duration of the recent Syrian drought, which is implicated in the current conflict, has become more than twice as likely as a consequence of human interference in the climate system.

An abundance of history books on the subject tell us that civil unrest can never be said to have a simple or unique cause. The Syrian conflict, now civil war, is no exception. Still, in a recent interview (45), a displaced Syrian farmer was asked if this was about the drought, and she replied, “Of course. The drought and unemployment were important in pushing people toward revolution. When the drought happened, we could handle it for two years, and then we said, ‘It’s enough.’” This recent drought was likely made worse by human-induced climate change, and such persistent, deep droughts are projected to become more commonplace in a warming world.

The next few blogs will deal with some specific, climate change-connected, vulnerabilities such as water stress and desertification.