If You Don’t Believe In Climate Change – Try It!

Posted on April 17, 2018 by climatechangefork

This blog is coming out three days after the March for Science and five days before Earth Day and my wife’s birthday. It’s a busy week.

Climate change is an abstract issue. Its main impact is projected to take place in the future and its extent is global. To have any chance at mitigation we needed to start yesterday. Barring that, today will do. Efforts at mitigation include changing energy sources and compromising in many areas that involve our quality of life. In most places, these changes and compromises require political decisions; in democratic societies these decisions need broad public acceptance.

It is not surprising that significant numbers of people worldwide have decided that they do not want to make such compromises. They maintain that the prospects of existential climate change, driven largely by man-made activities, are nonexistent. Well, science suggests that if you don’t believe in someone else’s scientific conclusions, you try to prove your own theory with observations.

Here is a simple experiment for those of you disbelievers:

During a nice summer day (a good spring day will do) get into your car, lock the doors and roll up all your windows and sit there. See what happens.

It turn out that hundreds of people are doing this, most of them inadvertently, with their small children or their pets. Figure 1 records the number of fatalities that result from this neglect in the US. Figure 2 shows the reason – a quick temperature rise that causes cruel death from hyperthermia. Both figures are taken from San Jose State University’s Department of Meteorology & Climate Science. When you are capable of taking care of yourself, you open the car doors and/or all the windows or you start the car and turn on the air conditioning. If you are a baby or a pet that cannot do such things, or the doors and windows are jammed and the car won’t turn on, you die. 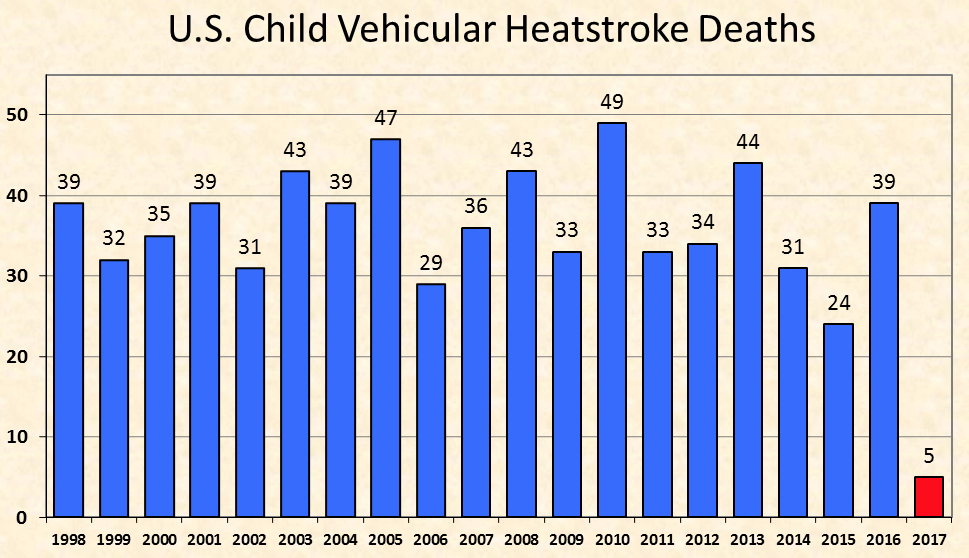 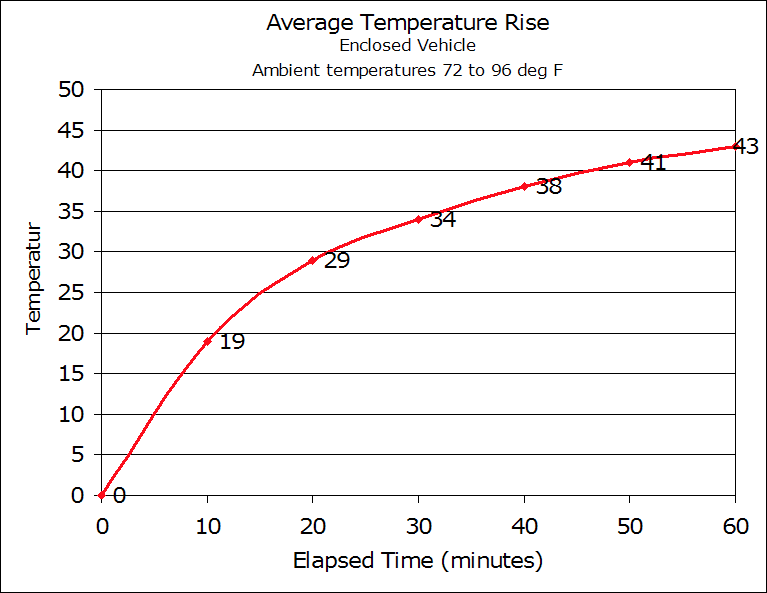 This mirrors climate change and its consequences on a small scale. Let us try to analyze the similarities.

Figure 3 shows the thermal radiation of a black object such as an iron poker that we put into a furnace to increase its temperature. I discussed this radiation in a previous blog (January 7, 2013):

It turns out that every “visible” object in the universe emits radiation that depends only on the temperature of the object and the surface area of the object. This kind of radiation is called blackbody radiation. “Visible” objects are the regular objects that are all around us and are constituted of atoms and molecules. There are other kinds of objects that don’t emit any radiation – this is dark matter and we can locate it only through its gravitational force. We don’t see this matter around us, but, in the universe, we find five times more dark matter as compared with visible matter and we still have no idea about the structure of dark matter.

The temperatures in the figure are given in degrees Kelvin, where:

The Kelvin temperature scale is about absolutes (the 0 on this scale is an absolute zero, below which you cannot go). Both axes are given in logarithmic terms (December 6, 2016) to best demonstrate the large differences in scale. The wavelengths express colors. The visible part of this radiation is shown in Figure 3 as a narrow band. Blue and violet have low wavelengths so they are on the left side of that small spectrum while red, with a higher wavelength is on the right side of it. Any light on this figure with a lower wavelength than violet is known as ultraviolet and any with a longer wavelength is known as infrared, which we often refer to as heat. The two temperatures that will attract our attention in Figure 3 are 5777oK (the surface temperature of the sun) and 300oK, which is the temperature of ambient light on Earth. We can see that as our object’s temperature drops the radiation peak moves to a longer wavelength with a lower peak value. The wavelength scale in Figure 3 is given in micrometers (μm) – millionths of a meter. 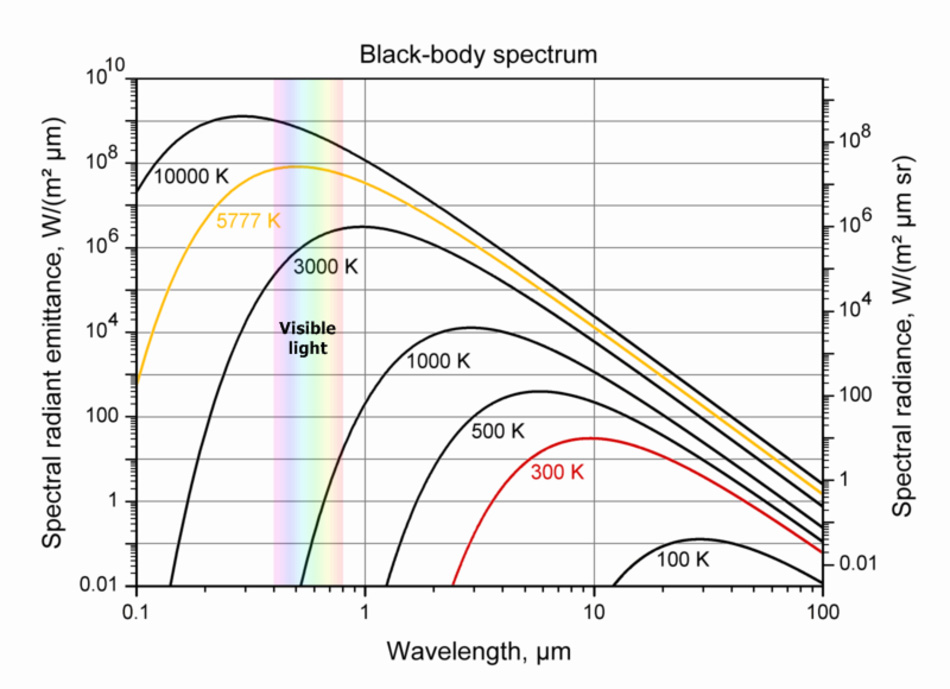 Figures 4 and 5 give the transmission spectrum of a 2mm thick piece of glass (Figure 4) and the absorption spectra of water and carbon dioxide in Earth’s atmosphere (Figure 5). The scale in Figure 4 is given in nanometers (nm), such that 1000nm = 1μm. In both figures most of the light from the surface of the sun (5777oK in Fig 3) is transmitted but significant portions of the light at 300oK (ambient) between 1 and 10 μm are blocked, thus raising the temperature of the interior. On Earth, much of this selective radiation blocking is done by the carbon dioxide released when we burn fossil fuels (see discussion of the carbon cycle, June 25, 2012). Additionally, as the temperature warms, a significant amount of additional water evaporates, playing a major role in blocking the infrared radiation from leaving Earth and raising the overall temperature further. This positive feedback amplifies the carbon dioxide impact.

Figure 4 – Transmission spectrum of a 2mm thick piece of glass 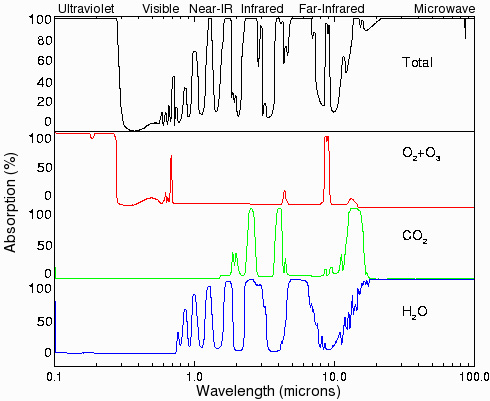 Figure 5 – Absorption of oxygen and ozone, carbon dioxide, and water into Earth’s atmosphere

The mechanism of the car heating is obviously much simpler than that of the planet heating. In the car the optical properties of the windows remain approximately constant. The chemical composition involved in transmitting the visible light while other elements block the infrared radiation doesn’t change as it gets hotter. On Earth the atmosphere plays the role of the windows. Human output of carbon dioxide leads to increased amounts of evaporated water, which in turn amplifies the blocking of infrared radiation. In the car, unless we are babies or animals we can get out through the doors and/or open the windows to control the temperature. On Earth, we cannot “open the door”; we cannot go anywhere. The equivalent of opening the windows would be to suck out the atmosphere. We cannot do that and survive. Nor do we have an air conditioner. In principle, we can clear the chemistry of the atmosphere of the infrared blocking elements or at least halt the practices that accumulate them. That’s what we are trying to do. By denying the necessity to actively mitigate our contributions to climate change, we are essentially locking entire future generations inside an increasingly hot car.

2 Responses to If You Don’t Believe In Climate Change – Try It!