The Green New Deal Resolution: Is it Viable?

Posted on February 19, 2019 by climatechangefork 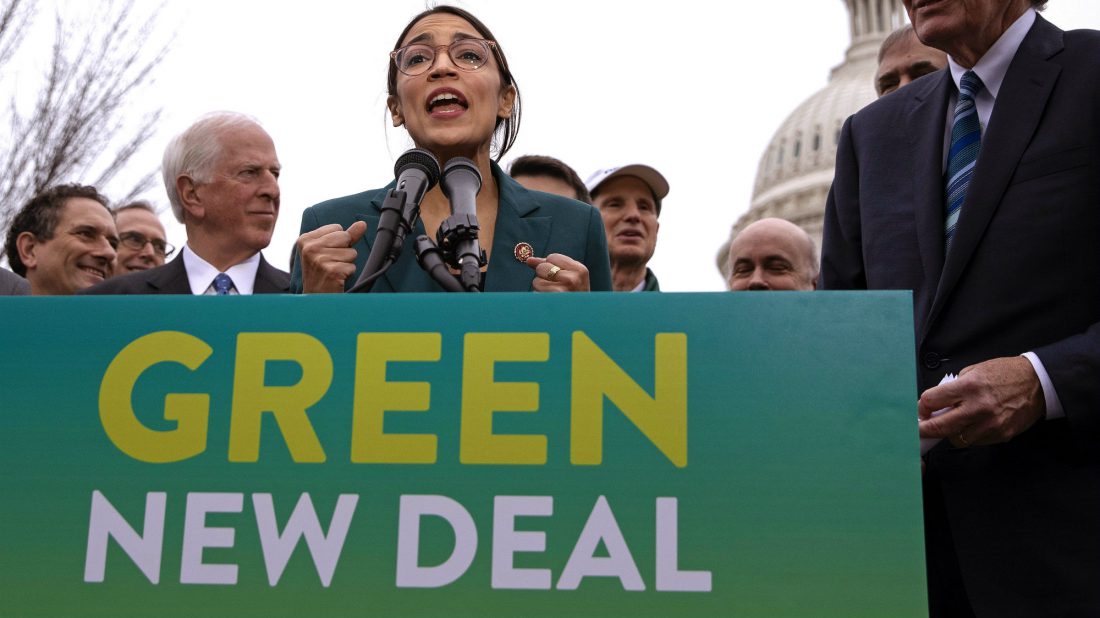 The “Green New Deal” that Rep. Alexandria Ocasio-Cortez, D-NY, and Sen. Ed Markey, D-Mass, have proposed has became the talk of the town. People are alternately warning it could spell disaster and praising it as our potential saving grace. To start the discussion from a factual place, and leaving aside political considerations, I am including key excerpts from the actual resolution that Representative Ocasio-Cortez submitted to the House of Representatives. The full resolution comprises 14 pages and consists of the requisite two main sections: “Whereas” describes the background problems, and “resolved” proposes solutions. I am posting the beginnings of both sections, along with summaries of the rest:

IN THE HOUSE OF REPRESENTATIVES

Ms. OCASIO-CORTEZ submitted the following resolution; which was referred to the Committee on —————

Whereas the October 2018 report entitled ‘‘Special Report on Global Warming of 1.5 oC’’ by the Intergovernmental Panel on Climate Change and the November 2018 Fourth National Climate Assessment report found that—

(1) human activity is the dominant cause of observed climate change over the past century;
(2) a changing climate is causing sea levels to rise and an increase in wildfires,
(3) global warming at or above 2 degrees Celsius beyond preindustrialized levels will cause—

(4) global temperatures must be kept below 1.5 degrees Celsius above preindustrialized levels to avoid the most severe impacts of a changing climate, which will require—

The two reports referenced are recent and fully credible, and were approved by the current US government; I have discussed both on this blog. The Fourth National Climate Assessment was officially and directly approved by the federal administration. Separately, the American representatives to the IPCC gave their approval to the IPCC 1.5oC report.

Since the resolution also directly addresses climate refugees in this ‘Whereas” and security threats to the US in subsequent ones, the authors could have also included the recent report by the US intelligence agencies (see May 23, 2017 blog). Let me just quote the heading of the second “Whereas”:

This paragraph also focuses on the responsibilities that the US bears for climate change. From here the resolution shifts gears to address the economy, income inequality, stagnation, general injustices, etc. within the country. It looks at our history, from the New Deal to WWII, and moving forward.

After listing the many conditions that make the resolution necessary, the document enumerates its suggestions for remedying the problems:

(i) clean air and water;
(ii) climate and community resiliency;
(iii) healthy food;
(iv) access to nature; and
(v) a sustainable environment; and

The first resolution covers a great deal of territory, spanning well beyond the environment. The second one, that I am not showing, specifies over 10 years’-worth of steps in national mobilization necessary to accomplish all of these goals.

The submission is a congressional resolution:

I assume that this is submitted as simple resolution for official congressional business, not as a bill or joint resolution intended to become the law of the land. I also imagine that Ms. Ocasio-Cortez can count probable supporting votes and thus doesn’t presume that even if approved by the House of Representatives, Senate approval will follow.

However, the resolution is now clearly entering the political dogfight:

Omitting some of the specificity in terms of timing, the resolution resembles the UN’s “Sustainable Development Goals” (SDG) that I described in the October 6, 2015 blog. The resolution could be much more effective if it separated the “green” part from the “New Deal” part. Next week I will look at possible alternative strategies that might achieve similar results while possibly attracting more bilateral support.

8 Responses to The Green New Deal Resolution: Is it Viable?