Posted on February 26, 2019 by climatechangefork

I interpret standing tall as holding your head up and meeting oncoming challenges rather than burying it in a pile of sand to avoid reality (see the October 16, 2018 post on ostrich myths and the American government’s deliberate obtuseness on certain matters).

Last week’s blog focused on the “Green New Deal” and whether or not it’s viable. The proposed resolution for the new House of Representatives enumerates strategies for dealing with climate change. One of the matters Rep. Alexandria Ocasio-Cortez, D-N.Y, included in her proposed resolution was the stress that environmental refugees will impose on the United States. I added in another relevant source:

Since the resolution also directly addresses climate refugees in this ‘Whereas” and security threats to the US in subsequent ones, the authors could have also included the recent report by the US intelligence agencies (see May 23, 2017 blog)

Recently, Chuck Todd made the following pronouncement on his program, Meet the Press:

A few days later, The New York Times reported that the White House has taken the opposite view:

White House Climate Panel to Include a Climate Denialist

The Pentagon and federal intelligence agencies have said that climate change is a threat. Now, the White House is planning a panel to study whether that is true.

WASHINGTON — President Trump is preparing to establish a panel to examine whether climate change affects national security, despite existing reports from his own government showing that global warming is a growing threat.

The article informs us that one of the last remaining climate change deniers resides in the White House, and is about to impact official reports—ones that fortunately, up to now, had remained disconnected from politics. In related news, on the same day, the media cited sources who claimed that Dan Coats, the Director of National Intelligence, is about to be fired. The reasons given did not include the recent intelligence report that I mentioned above but rather his public statements about US interactions with North Korea. That said, nobody that I know has any doubts about what this will mean for future reports on the topic. The intelligence reports are published every four years (see May 23, 2017 blog) so the next one will come out after the coming presidential election. We will see how that will play out.

To stand tall, we have to believe our own data and act on them—not give deniers the opportunity to “objectively” refute scientific evidence. Nor is this trend of denying data restricted to the federal level. The October 16, 2018 blog, which I mentioned above in connection to ostriches, lists a few cases on the state level—including Arizona, North Carolina and Florida—that actively oppose the use of scientific findings about climate change and its impacts to create legislation that would affect essential economic activities.

It is within Congress’s power to ban such practices. A legislation directed at mitigation or adaptation to climate change has a chance to pass both houses of Congress – provided that it maintains a narrow purview. Republicans who already believe in climate change would have the chance to jump on the bandwagon—and possibly reap political rewards. Many Republican senators are facing tough elections in 2020 and public opinion now favors standing tall with regards to both acceptance of and action against climate change. As you can see in Figure 1, about 60% of Americans are either alarmed or concerned; any politician that runs against this trend might face electoral consequences. 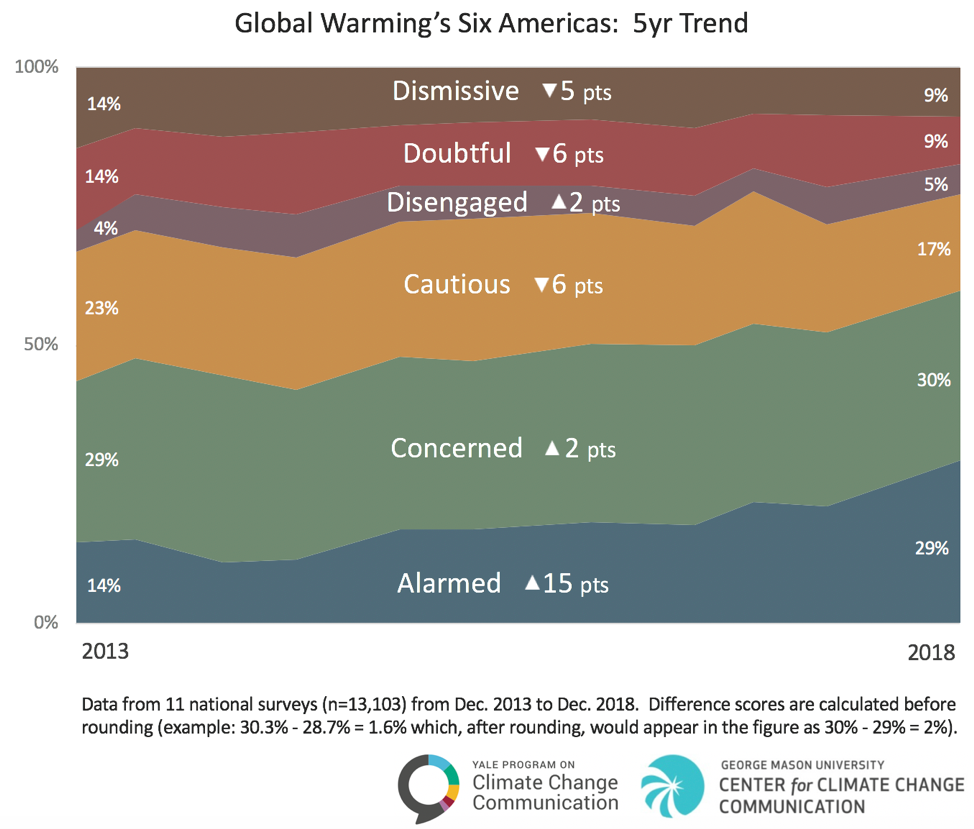 These attitudes are starting to extend to awareness of local and personal impacts in addition to the wider acceptance of those on a national and global scale. Based on a recent Pew survey, this trend should have major electoral consequences: 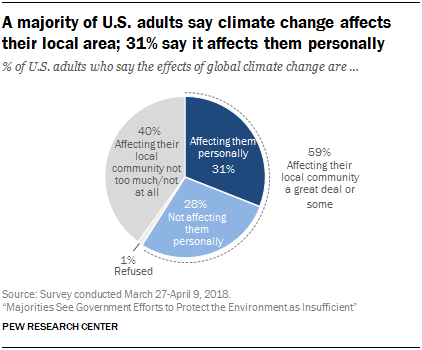 Effective legislative action doesn’t have to be revolutionary. In next week’s blog, I will try to show that expanding and enforcing requirements for Environmental Impact Statements (EIS) to specifically incorporate climate change impacts could do the trick.