Posted on March 5, 2019 by climatechangefork 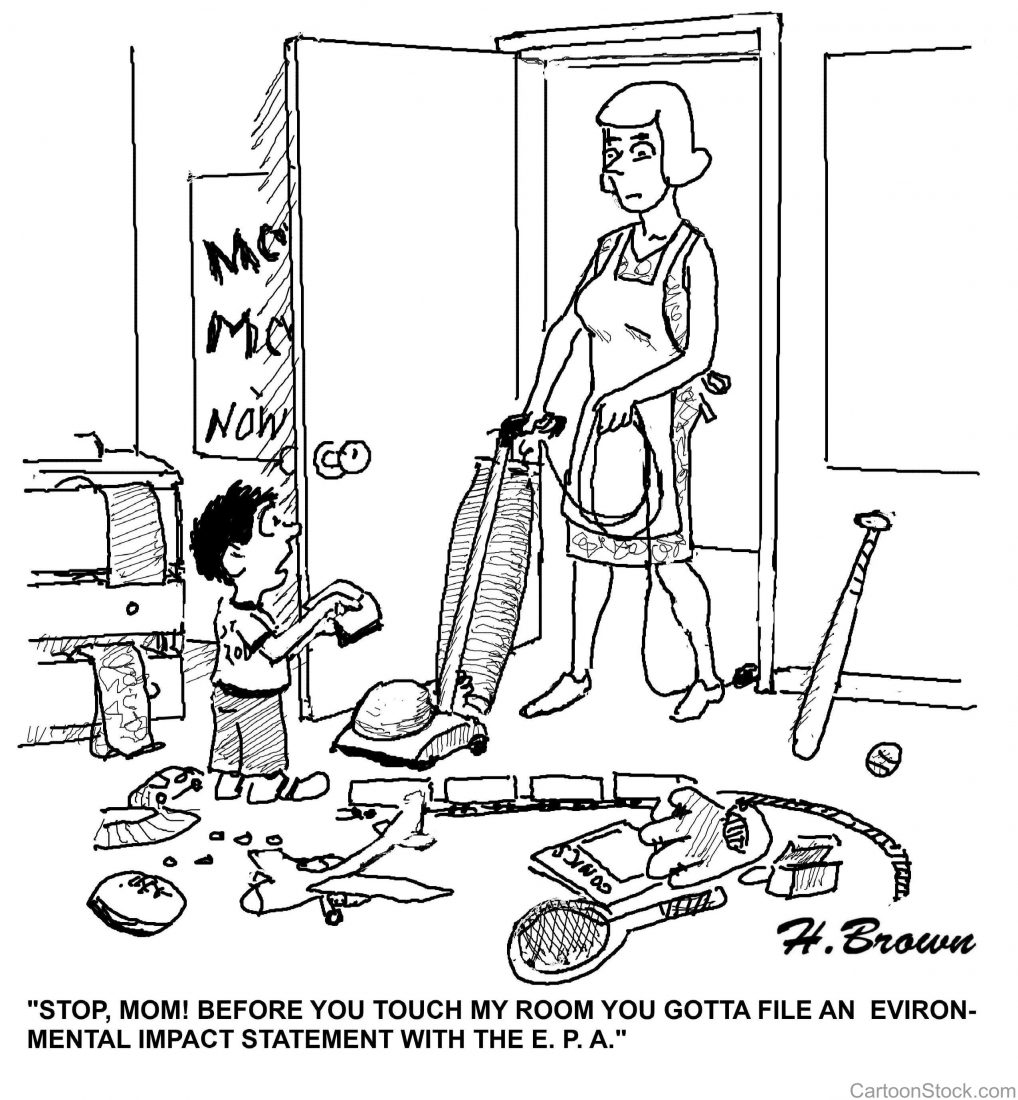 I use the cartoon above to teach my students one of the most fundamental tenets of physics, unimaginatively called the “Second Law of Thermodynamics.” A quick Google search will tell you that thermodynamics is, “the branch of physics that has to do with heat and temperature and their relation to energy and work” (Wikipedia). The law states that, “left on their own, systems tend to maximize their disorder.” Disorder in physics is measured with a function called entropy (you can Google that as well). We don’t need the exact definition of entropy here; we can all grasp the concept of disorder. One of the better-known examples is the room of a small child, when left on its own. The room, obviously can be cleaned by adults—or if the child is a bit older, by incentivizing the child to do it himself. But this kind of “fixing” doesn’t defy the law because it means the room is not being “left on its own.” The point of an Environmental Impact Statement (usually employed when a structure is scheduled to be built or a massive project is underway) is to predict how a project will impact (create “disorder” in) the rest of the system or surrounding area and what kind of intervention will be needed to mitigate those detrimental effects.

Policymaking on all levels is now (very slowly) starting to factor in the impacts climate change has (or will have) on almost every global economic activity. I have described some examples in earlier blogs (just type economic impact into the search box above). The current political climate in many countries is not exactly encouraging for productive consideration. Nonetheless, these discussions are still taking place, with the hope that global environmental considerations will play increasing roles.

In the US, federal laws and regulations require an Environmental Impact Statement (EIS) to evaluate the effects of certain actions on the environment and to consider alternative courses of action. The National Environmental Policy Act of 1969 (NEPA) specifies when an environmental impact statement (EIS) must be prepared. NEPA regulations require, among other things, for federal agencies to include discussion of a proposed action and the range of reasonable alternatives in an EIS. Sufficient information must be included in the EIS for reviewers to evaluate the relative merits of each alternative. The Council for Environmental Quality’s (CEQ) regulations provide the recommended format and content.

In the European Union permits are required for activities such as:

Meanwhile, Bloomberg terminals now include ESG (Environmental, Social, and Governance) information (“Integrating Sustainability into capital markets”) that can be incorporated into many economic decisions.

Perhaps the most climate change-relevant information that can be incorporated in any of these search tools is the social cost of CO2 (SC-CO2). The US National Academies of Sciences, Engineering, and Medicine recently initiated discussions about possible related regulations and published a paper about it “Valuing Climate Damages: Updating Estimation of the Social Cost of Carbon Dioxide.”

A recent court case examines incorporation of climate change in the EIS and is worth examining at some length. Below are selected paragraphs from the article, “Including Climate Change in Environmental Impact Analyses”:

Is climate change a “reasonably foreseeable” consequence from a government agency’s approval of a natural gas pipeline? What if an entirely separate agency regulates the facilities that will actually burn the transported gas? And what if the construction of the new pipeline would enable the retirement of older coal-powered plants and thus lessen overall climate impacts?

A three-judge panel of a federal court of appeals recently grappled with these questions and determined that the Federal Energy Regulatory Commission (FERC)—in considering and approving the construction of a natural gas pipeline project—should have considered the eventual burning of natural gas when weighing environmental concerns.

In addition, the National Environmental Policy Act of 1969 (NEPA) requires that federal agencies produce an “environmental impact statement” (EIS) for all “major Federal actions significantly affecting the quality of the human environment.” The EIS must address potential “adverse” consequences of the action and possible alternatives to it.

Shortly after FERC completed its EIS for the natural gas pipeline at issue in Sierra Club v. FERC, the agency issued a certificate authorizing construction of the project.

The environmental groups challenging FERC’s approval of the project argued that the agency failed to perform a proper EIS. The groups expressed concern that the burning of the natural gas being transported by the pipelines could “hasten climate change and its potentially catastrophic consequences,” and that FERC had failed to take those effects into account when developing its EIS. After FERC denied the groups’ request to halt construction of the project, the groups sought review by the U.S. Court of Appeals for the District of Columbia Circuit—the federal court expressly granted authority by the Natural Gas Act to hear challenges to FERC’s orders.

The question for the court was whether FERC was required—in completing its EIS—to consider the fact that the natural gas carried by the pipelines would ultimately be used in Florida power plants, which would generate electricity and emit greenhouse gas.

The Efficient Market Hypothesis is an investment theory that I have discussed here before (February 21, 2017 and November 21, 2017). It states that in free markets, prices reflect all available information.

It’s high time that we make it mandatory to factor in the impact of climate change on every economic decision that we make.

Technically, this is feasible by using the dominant future scenario—currently based on the business as usual scenario (RCP8.5 in the IPCC lingo – see October 28, 2014 blog). The EIS can be examined periodically to reflect changes in the prevailing scenario. The scope of such a policy change will be narrower than that of the “Green New Deal” and it has a higher probability of attracting Republican votes and being effective in its contributions to mitigation and adaptation of climate change.