Guest Blog: How Income Inequality Correlates with CO2 Emissions and What We Can Do About It

Hello readers! This week’s guest blog is from Benjamin K, Quinn Downes, and Michael Guerin. Combined, we carry degrees in the fields of physics, chemistry, and biology. Through this blog post, we hope to spread information on the correlation between income inequality and carbon emissions. Although both of these factors have been extensively studied separately from one another, we utilize known information to relate the two aspects. More importantly, however, we include information on how changes in income inequality can be used to decrease carbon emissions.

Recent developments in the world’s environmental, political, and economic atmospheres have made climate change and the global widening income gap dominant topics of discussion. More of the world’s wealth is coming into the possession of fewer people while the majority of the population possesses increasingly less wealth. It is, therefore, unsurprising that there have been numerous studies done to explore how income distribution affects carbon emissions. For example, total CO2 emissions of a nation are examined alongside lognormal income distribution statistics. In this study, we analyzed data to determine if economic inequality prevalence throughout a country leads to increased carbon dioxide release as a result of excessive transport. We focused our analysis on transportation. Examining this data along with global Gini coefficient statistics, the empirical results of analysis indicate a positive correlation between a nation’s Gini coefficient and the anthropogenic CO2 emissions from all its methods of transportation. With these results, policymakers will have more insight, enabling them to make informed decisions when approaching these matters. Particularly, these findings will guide policymakers to realize that increased income equality is a possible remedy for high CO₂ emissions.

However, to first understand the reasons as to why this analysis was necessary, we will take a look at previous models describing how GDP per capita affected the environment. In particular, during the mid-twentieth century, Simon Kuznets proposed a hypothesis stating that as economic development occurs, there is a spike in environmental degradation. As the economy continues to develop, environmental degradation reaches a peak, after which it starts to decrease. Kuznets theorized that economic inequality of a society also follows the same relation, whereby initial economic development will cause a spike in economic inequality. 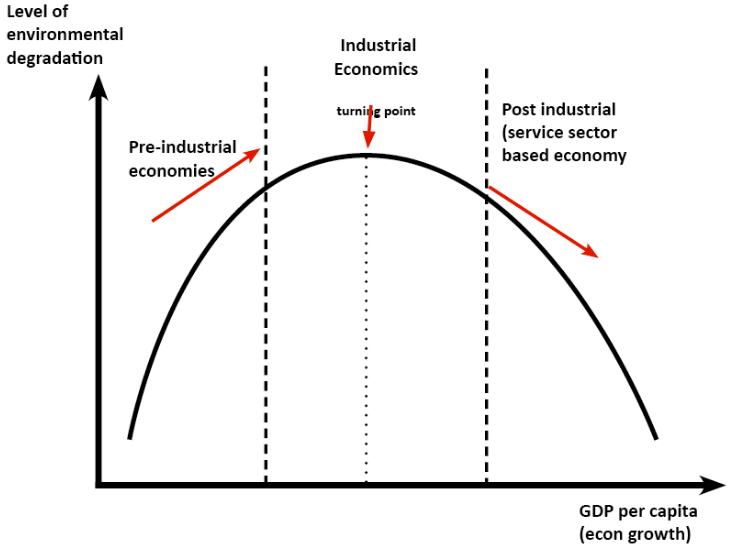 To put this in context, let’s consider a hypothetical undeveloped country. All of a sudden, this country is given the opportunity to invest in a business such as hospitality, because a lot of foreigners want to visit. As expected, only people with a large amount of capital can initially invest to create hotels and resorts, which they will eventually profit from. Because of this occurrence, economic inequality initially increases, since the rich will be getting richer. As more labor is needed, more people from rural areas will continue to flock towards urbanizing areas where these new hotels are located, thus keeping wages low and further increasing economic inequality. However, Kuznets continued to propose, as such industrialization proceeds, more workers will earn the area’s average income, thus decreasing economic inequality.

We now know that carbon dioxide is the main anthropogenic greenhouse gas and is believed to be responsible for the majority of global warming.3 When considering carbon dioxide as a “scale” for environmental degradation, it is incorrect to assume that carbon emissions will decrease as an economy succeeds. Due to aforementioned reasons, our study instead focuses on how other statistics can be used to more accurately correlate income inequality and carbon emissions.

Lognormal distribution of income and the Lorenz Curve are two statistical forms used to quantify income inequality. This curve is a graphical representation of the distribution of income in an economy. The Gini coefficient is a ratio with a value between 0 (0%) and 1 (100%) that we can get from the Lorenz Curve. It can be used as a measurement of the equality of income within a population, with a value of zero expressing perfect income equality, and a value of one expressing maximum income inequality. In other words, in an economy in which every citizen earned exactly the same income, the Gini coefficient would have a value of 0. Alternatively, in an economy in which one citizen collected the entirety of the income, the Gini coefficient would have a value of 1.

The Gini coefficient should not be mistaken for a measurement of a nation’s income. It is not uncommon for high-income and low-income countries to have similar Gini values. For example, in 2016, Turkey and the United States had a Gini coefficient of roughly 0.40, yet Turkey’s GDP per capita was approximately half of that in the US. 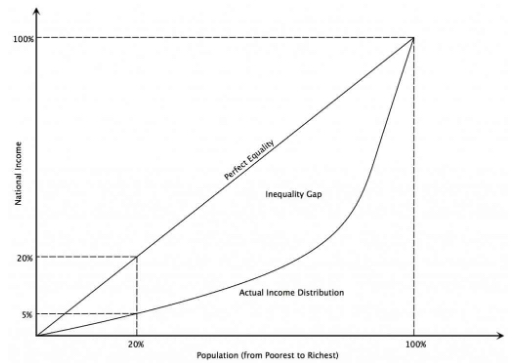 Figure 2 – Graphical representation of the relationship between a nation’s income and its GDP per capita. This relationship demonstrates a Lorenz curve and can be used to study a nation’s level of economic equality.4

There are many factors that affect a country’s carbon emissions. Larger countries obviously emit more carbon than smaller countries; technological advancements can lower the carbon emissions of wealthier countries while industrialization raises those of developing nations. Carbon is also emitted from many sources like cattle, electricity generation, and our focus here: transportation. This includes domestic aviation, domestic navigation, road, rail, and pipeline transport but we are not counting international aviation or international marine bunkers. To even the playing field in the data as much as possible, we plotted the percent of carbon emissions that came from the use of fuel for transportation for each country5 versus the distribution of income inequality to see if there was any significant, observable trend. This was done using the income inequality and emissions percentages per country for each year to eliminate time as a variable in consideration. 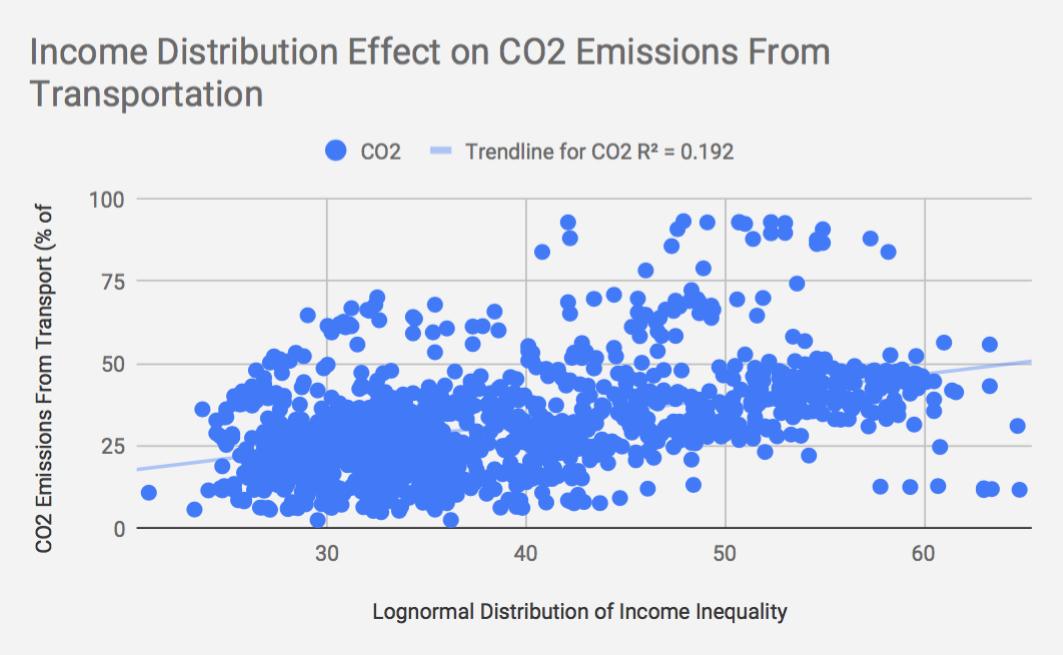 From this graph we can see that there is a positive trend, meaning that there is an effect of income inequality on carbon emissions, globally. The R² value of 0.192 means that about one fifth of the variation in the emissions can be explained by the income distribution. This shows that income inequality has a definite effect on carbon emissions in a country.

Countries with higher GDP per capita are shown to have increased carbon emissions as well. The graph on the left represents countries in the 55th percentile (top line) and 45th percentile (bottom line) of GDP per capita. The graph clearly shows that with the higher GDP per capita there are also higher CO₂ emissions. The U shape of the graph also tells us that with high inequality, carbon emissions can be reduced by making the income distribution more equal, but that after a certain point making income distribution more equal will have the opposite effect.

9 Responses to Guest Blog: How Income Inequality Correlates with CO2 Emissions and What We Can Do About It